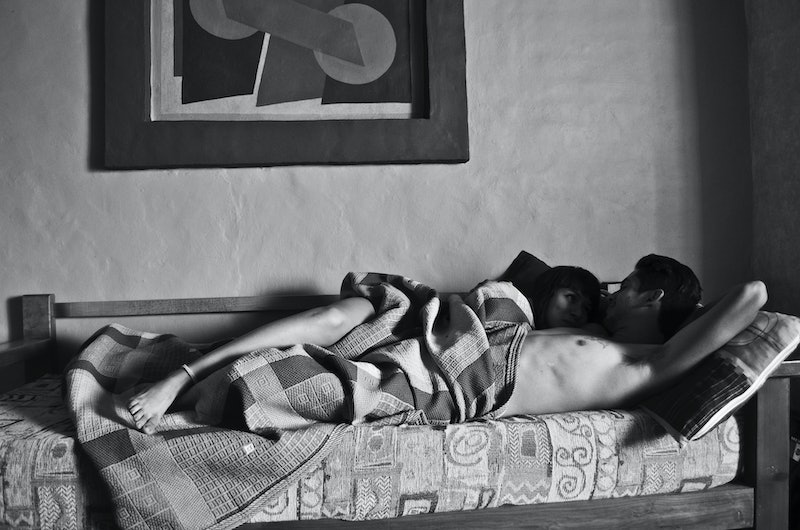 We’re always hearing that we could be having better sex, a better orgasm, or a better relationship. But how often do we actually hear the nitty-gritty details of how we might actually achieve those things? Bustle has enlisted Vanessa Marin, a licensed sex psychotherapist based in San Francisco, to help us out with the specifics. This week’s topic: Why sex hurts sometimes, and what you can do about it.

Q: I’m in my first real adult relationship. I’ve been with my boyfriend for a few months, and we just started sleeping together. The thing is, I don’t enjoy sex that much. It doesn’t feel that great, and sometimes it actually hurts a little. I’ve had sex with one other person and felt roughly the same, but we only slept together a few times. I don’t ever say no when my boyfriend initiates because I worry about disappointing him, but I don’t want to get to the point where I start dreading sleeping together. I feel like a freak for saying this, but maybe I just don’t like sex?

A: Thanks so much for your question. There are lots of things to sort out here, so let’s dive right in! Here's what you need to know.

Know This Is Pretty Common

There’s absolutely nothing wrong with you for questioning whether sex is your cup of tea. So many of my female clients complain about sex that is boring, unpleasurable, painful, routine, and just plain bad. I’ve never met someone whose sex life couldn’t be improved in one way or another.

I think the problem is that a lot of people expect sex to be fantastic right out the gate. We seem to think that we should have everything figured out from the time we lose our virginity. We expect to have amazing chemistry with new partners. The reality is that having sex that feels good takes a lot of trial and error.

Whenever I hear questions like yours, I immediately start wondering — are you not enjoying the sex you’re having because you’re not into sex, or because the sex you’re having leaves something to be desired? If you’re having sex that isn’t your style — for example, if you like slow, intimate sex, but your boyfriend prefers intense thrusting — you can’t beat yourself up for not liking or wanting it that much.

You may not have had enough sexual experience yet to feel like you can differentiate between what you do and don’t like when it comes to sex. If you’re not sure, think about some of these questions: Does your partner take the time to get to know your body? Have you experimented with different positions, speeds, strokes, or foreplay activities? Have you ever had an orgasm, or gotten close to one? Do you feel connected to your partner when you guys are being intimate? Or, to put it another way, when you’re having sex, are you thinking of ways that it could be different?

Is It The Sex, Or The Frequency?

Another factor to consider is if you’re unsatisfied with the sex itself, or with the frequency with which you’re having it. In other words, if you guys were having sex less often, do you think you would enjoy it more? It seems like you’re forcing yourself to have sex when you don’t want it, which could greatly contribute to the feeling of not being that into it. Food offers a good comparison here. If you force yourself to eat french fries when you’re really not in the mood, would you be beating yourself up for not enjoying those fries? I don’t think so.

One other very difficult topic that ties into this is sexual abuse. If you’ve had your sexual boundaries violated in any way, it can make it really hard to enjoy sex. Even if you’re not being abused, your body can shut down, and you'll want to talk about those feelings with your boyfriend, and with a professional.

If you’re realizing that you’re not quite sure how to have the kind of sex that works for your body, here are some super simple guidelines to follow:

Next, let’s talk about the pain issue. Sexual pain can be caused by a number of different factors. The most frequent culprit of painful sex is a lack of lubrication. Sex is pretty rigorous on your lady parts, and you can get chafing, tearing, and bruising if you aren’t well-lubricated. I highly recommend using lube during sex, even if you don’t think you need it. It can truly be a game-changer. Splurge on a high-quality silicone-based lube like Eros. It lasts forever and has a wonderfully smooth, slippery texture.

If you’re still in pain even after trying lube, I’d suggest a trip to your doctor. Sexually transmitted infections, fibroids, endometriosis, and cysts can all cause pain, or you may have a sexual pain condition like vaginismus or dyspareunia. Getting a thorough check-up can help identify the cause of your pain, or give you the peace of mind that nothing’s wrong physically.

Know When To Stop

If you feel pain during sex, it’s really important to honor the signals your body is sending and stop. Don’t try to push through the pain. Ask your boyfriend for a little break, and try breathing slowly and deeply. You can keep kissing and touching each other. If you feel up to giving it another go, ask your boyfriend to go slow and try out a different position. You can also try climbing on top, so you can have control over the depth, angle and pace of penetration.

Remember: Your Feelings Are Valid

I understand that you’re worried about disappointing your boyfriend if you turn down his sexual initiations. But by allowing him to have sex with you when you don’t actually feel like it, you’re sending yourself the message that what you want isn’t as important as what he wants. Sometimes we make compromises in relationships, but what you’re describing is beyond that. You’re forcing yourself to do something you don’t want to do over and over again, and you’re even allowing yourself to be in physical pain because of it.

Sit down with your boyfriend and say, “I’m learning so much about my sexuality in this relationship, and I’m glad that I get to explore this side of myself with you. One thing I’m trying to pay more attention to is my own natural level of desire. I’ve been really focused on trying to please you, because I care about you a lot and don’t want to let you down. I’d like to learn that it’s OK for me to turn down sex if I’m not totally in the mood. Could we talk about how I could do that without making you feel hurt in the moment?”

Finally, if you’re really honest with yourself and get the sense that you just don’t enjoy sex, and that feeling wouldn’t change even if you were to start having the kind of sex that works for you, you may want to do some reading on asexuality. I highly suggest checking out the Asexual Visibility and Education Network, particularly their FAQ page.

Your level of interest in sex may change over your lifetime, and you don’t have to define yourself as asexual if you don’t want to, but knowing that there are plenty of other people out there who aren’t that interested in sex may be comforting to you.

Either way, the bottom line is this: It’s always OK to say no to sex when you don’t feel like it.