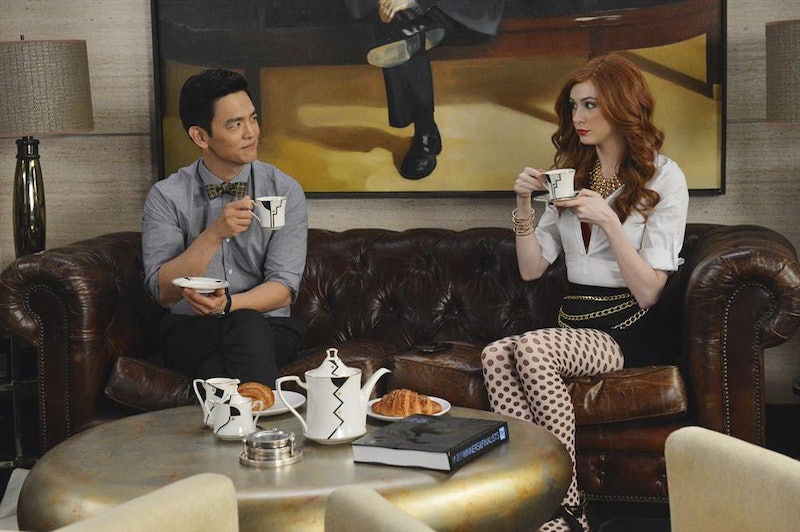 We all know that first impressions are important — but Miss Jane Austen taught us in Pride and Prejudice that our first instincts about someone (or something) can often be wrong. With only one episode under its belt, it seems premature to say whether the new sitcom Selfie on ABC should be canceled, but without a serious rebrand (like main character Eliza Dooley is working toward on the show), Selfie doesn't deserve a Season 2. Lead actors Karen Gillan and John Cho have proven they have good taste in the past with Doctor Who and Harold & Kumar Go to White Castle, respectively, so I'm not saying the show couldn't improve. But as it stands now, Selfie has too many "hip" jokes and one majorly annoying main character to warrant my viewership.

And it looks like Selfie might not be renewed after all. Its premiere ratings were just shy of 5 million viewers, and if the performance of past ABC sitcoms is any indication, Selfie is set to be a one-hit wonder. Take for example, Trophy Wife (started out with just over 6 million viewers) and Mixology (which came in at Selfie range, just under 5 million in its premiere), both of saw steady declines in viewership — as most series do — but were eventually canceled. Trophy Wife's critical love couldn't even save it and Selfie certainly doesn't have that on its side.

And this is where I say, "I told you so." My initial distaste of Selfie began with the name. A lot of my favorite sitcoms have terrible names (New Girl, really? You know you're on Season 4 of being a "new" 34-year-old woman, right?), but something about the title Selfie for a TV show makes me immediately insulted. (Hey, ABC — modern TV audiences have proven that we are smarter than just a trendy phrase as an entire premise. We deserve better! Netflix, AMC, HBO, and even FX get us, so why can't you?) If the show does manage to rise above the pitfalls of its pop cultureness, like Cougar Town before it, it will be stuck with a name that shows just how desperate the TV execs were to reap the benefits of a popular phrase.

But awful name aside, there are serious flaws with the show itself. Selfie is overly reliant on the buzziness of social media — just like Eliza herself. I remember listening to the commentary of some Sex and the City episodes (yes, I'm one of those nerds), and Michael Patrick King discussed how they always tried to avoid having any billboards or advertisements in the background of shots. Why? To help make the show as relatable (and rewatchable) as possible throughout the years. Of course, I recognize that Sex and the City episodes are dated (I just rewatched the episode where Smith goes on TRL. And that's not even mentioning some of the outrageous and amazing fashion — good god, the fashion!). But I love that there was an effort to make the show as timeless as possible — because I can still relate to it.

Selfie is doing the complete opposite. The show's jokes are old the second they come out of Eliza's mouth. That's not to say all the jokes on Selfie are bad. But for every slightly edgy Gwyneth Paltrow joke, there's an obligatory Frozen joke:

But it's not just the writers' jokes. I don't buy Gillan's delivery of her "funny" one-liners in the first episode, either. Perhaps it's because the Scottish Gillan is trying to recreate a Kardashian way of speaking, so I literally struggled with understanding what she was saying sometimes (which happened when I watched her on Doctor Who as well). Which leads me to the very unpopular part of this whole argument.

I was not a huge fan of Gillan's character Amy Pond on Doctor Who. I don't blame her entirely for that as I had a hard transition from the Tenth to the Eleventh Doctor (David Tennant to Matt Smith). But the plot was too Amy-centric and the Doctor was too obsessed with her — which made me inevitably resent her character. With signs of Henry already showing attraction to Eliza (as seen in the clip of Selfie Episode 2 below), I fear that the show is going to try to force Eliza's likability on me, when I really see no reason (as of yet) to care for or root for this character.

On top of it all, it's hard for me to have compassion for a selfie addict, drawn to be the epitome of narcissism and navel-gazing. Still, the show wants us to realize Eliza is not a bad person, which is why she is so distraught when she finds out her boyfriend is a married man that she pukes. OK, so her morals are not completely out of whack, but hey, maybe you should have noticed the prominent ring tan line? Now, I'm not blaming her as the other woman here — the married man is clearly the asshole in this situation. I'm saying that storyline coupled with the fact that she was unattractive in high school isn't enough to make her endearing.

And Eliza isn't the only one lacking. I may agree with some of the rants Cho's Henry makes about social media, but his character is too one-sided as the stick in the mud. Of course, this is an adaptation of My Fair Lady , so they are going to prove how much opposites attract and bring out the best in each other, blah, blah, blah. As a person who grew up dancing around to "I Could've Danced All Night," I always wanted Eliza Dolittle to end up with "On the Street Where You Live"-singing Freddy rather than the egotistical jerkface Henry, played by Rex Harrison. Henry hasn't improved much on that situation.

Despite my ranting, I really actually wanted to like Selfie. And I do find Gillan and Cho likable outside these characters. Perhaps it wouldn't be impossible for Selfie to turn into a decent show, but it needs to start with giving its characters more than one dimension.

There's still time, and I may have a change of heart like Elizabeth Bennett and Fitzwilliam Darcy underwent to end up with their happily ever after in another classic romance featuring an Eliza, Pride & Prejudice. But something tells me that Austen's Eliza would support my sound (if not quick) judgment of Selfie.