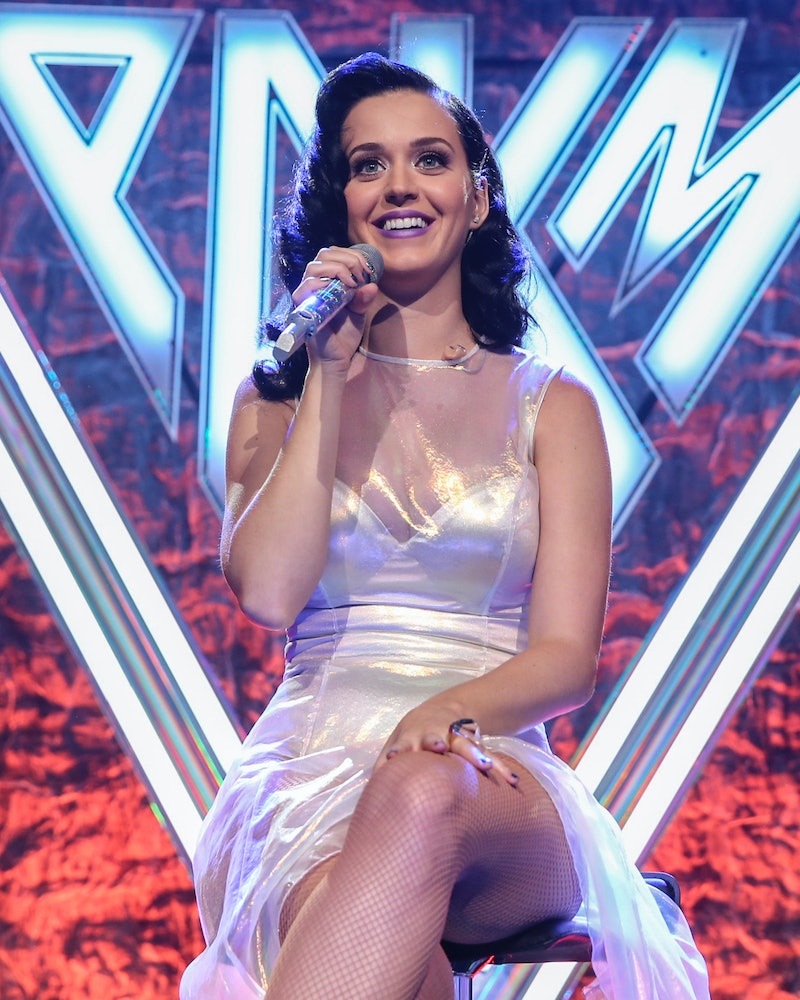 On the heels of Katy Perry's totally hilarious ESPN appearance and the announcement that she's playing the Super Bowl halftime show, you'd think that Perry wouldn't have any more breaking news up her sleeve — but you'd be wrong. Reportedly, Katy Perry may have collaborated with Drake on a new song. That is, anyway, per producer Max Martin's website Maratone, where Drake is listed on the credits for an upcoming remix of Perry's song "Legendary Lovers." According to MTV, there's been no official confirmation as of yet, but this does certainly suggest a musical union between the artists in the form of a remix might be the real deal.

At first glance, Perry teaming up with the "0 to 100" rapper seems like an unlikely collaboration because — even though he constantly professes his love for the ladies — musically he still has quite a bit of edge compared to Perry, who has an affinity for neon colors, lollipops and basically resembles a live pop princess version of Rainbow Brite.

However, the "I Kissed a Girl" singer has had great success collaborating with other rappers who don't exactly share her happy-go-lucky pop star aesthetic. She teamed up with Snoop Dogg on 2010's "California Gurls," enlisted the help of Three 6 Mafia's Juicy J for the uber popular "Dark Horse" and, most recently, released a remix of "This is How We Do" featuring rapper Riff Raff.

Another aspect of this rumored collaboration that makes it sound all the more likely to be true is the song in question. "Legendary Lovers" sounds a little more pop compared to what we're used to hearing from Drake, but it's hard to deny that the Toronto rapper's musings on love aren't an undeniable part of his mass appeal. And — I may be reaching with this one — but some of Perry's verses on "Legendary Lovers" kind of remind me of Drake's rapid-fire flow on the remix to Migos' "Versace." That said, Drake might be able to fit in on a "Legendary Lovers" remix pretty easily.

Either way, you have to admit — this collaboration would be an interesting one, if it happens.