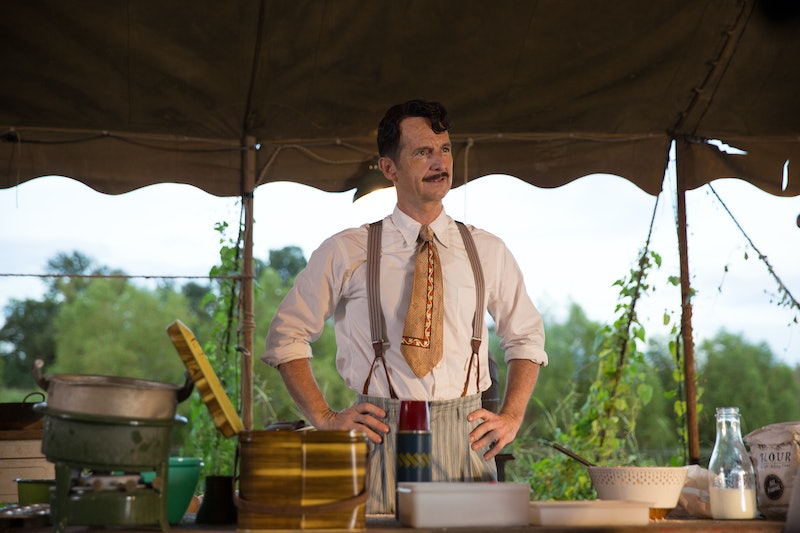 Remember the days when we all thought that the antagonist of FX's American Horror Story: Freak Show was a masked clown named Twisty? Little did we know that the scariest clown since Tim Curry put on a red nose would turn out to have a tear-jerking backstory, and then be carted off to the afterlife by Wes Bentley's emo demon Edward Mordrake. Twisty's absence left quite the villain-void on the show, but two very different men have eagerly stepped into his vacated position: AHS newcomer Finn Wittrock as pampered manchild Dandy Mott, and AHS veteran Denis O'Hare as unscrupulous conman Stanley.

Dandy wasted no time in literally stepping into Twisty's shoes, donning the dead clown's mask and killing his maid, and then a poor unsuspecting hustler (played by White Collar's Matt Bomer). And the fact that Jimmy is in the Mott home looking for Bette and Dot Tattler, and his maid's daughter Regina is probably on her way there to looking for her missing mom, things look like they're only going to get more complicated for the budding serial killer.

As for Stanley, his endeavors to earn a quick payday by procuring the body of a freak have thus far proved fruitless. Though we've seen him and his partner Maggie offing various members of Fraulein Elsa's Cabinet of Curiosities in their imaginations (including Bette and Dot, Paul the Illustrated Seal, and the adorable Ma Petite), so far he hasn't actually managed to kill any of them — unless those fantasies were really flash-forwards, that is...

Considering that both of these men are gunning for the freaks, albeit in different ways, isn't it only a matter of time before they team up to take them down together? Dandy's obsession with Elsa's sideshow seemed to take a backseat for a couple of episodes while he developed his killer instincts, but now that Jimmy — the man who devastated Dandy by turning down his offer to join the circus, remember — is back in his line of sight, we may be about to see his murderous compulsions focus once more on the freaks.

And Dandy may be just the ally that Stanley needs. So far he's been frustrated in his attempts to get Maggie to kill any of the freaks. She backed out of drowning Ma Petite in a butterfly jar and balked at the idea of cutting off Jimmy's lobster hands. If Stanley were to discover that there was someone else in Jupiter, Fla. who was happy to help the freaks shuffle off this mortal coil, he probably wouldn't hesitate to replace his ineffective partner-in-crime.

So what might cause Dandy and Stanley's paths to cross? Maybe Dandy will kill one of the freaks, and when Stanley hears that it wasn't Maggie's doing, he'll seek out the real culprit. Or maybe Dandy will happen to overhear Stanley and Maggie discussing their plan at some point and offer his assistance. (This does seem like the more likely scenario, since Stanley apparently has no qualms with talking about murdering people while standing ten feet away from his intended victims inside a tent made out of thin fabric that is definitely not soundproof.)

We've seen six of Season 4's 13 episodes, which means we're barely halfway through Freak Show. There's plenty of time for the season's two Big Bads to team up. I just have one word of advice for Stanley about enlisting the help of a psychotic serial killer: if you play with fire, you're going to get burned. The conman better be careful that his plan doesn't backfire, or he may end up the one ensconced in a jar of formaldehyde.