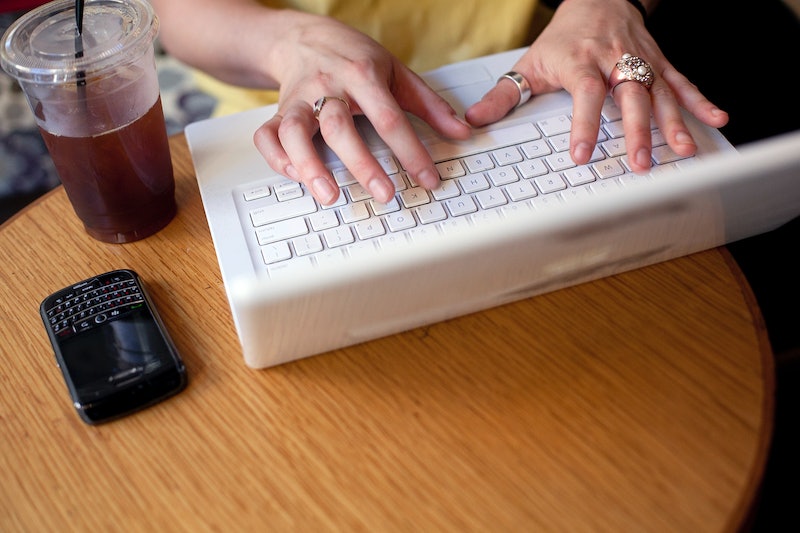 The diagnosis the anonymous commenter gave me was Histrionic Personality Disorder (HPD). When I clicked on the Wikipedia link he so thoughtfully provided, I couldn't help but admire his insight. His intelligence. His surprising familiarity with the DSM-IV.

HPD is defined as "a personality disorder characterized by a pattern of excessive emotionality and attention-seeking, including an excessive need for approval, and inappropriately seductive behavior." Though I typically hated being the center of attention (I'm an introvert with moderate levels of social anxiety — why do you think I'm a writer?), there was a glimmer of truth in there. My low self-esteem did lead me to seek out the approval from my audience.

Recently, I had a conversation with a group of fellow writers on the value of online criticism. Most of them mentioned that they struggled to avoid taking anonymous comments to heart. I told them that I often felt the same way, but that I tried to treat criticism from anonymous commenters in much the same way I treated criticism from editors, writing partners, and workshop attendees: Needlessly cruel comments differ from legitimately constructive ones, I told them. File away for later the criticism that resonates with you. Ignore the rest.

And so I found myself searching for meaning in the 99 comments on my tongue-in-cheek piece on cockblocking. Sure, most of the commenters thought I was a slut, "on the promiscuity-carousel for so long" that I couldn't possibly stay faithful to my husband. Most of them couldn't seem to discern humor or irony if it slapped them in the face.

But there was gold in them there comments.

"Start picking out names for cats," one commenter suggested, "because that's what you're going to be left with after the upcoming divorce."

How intuitive, I thought. How'd she know I was an irrepressible cat lady? I buried my nose in Lusa's fur and gave her a kiss, while Mercutio looked on with bored, lazy eyes, and Gizmo rubbed his head against my right calf.

Another commenter made a bold prediction about my marriage. "One thing I WILL say with no hesitation whatsoever, that husband is going to leave," he said. "Sooner rather than later."

"You should totally go out to bars alone, get wasted, and flirt with other men," said another commenter, "where he can't 'cockblock' your need to validate yourself via massages and romantic connections with drunken strangers."

I should try that, I thought to myself. It might help me improve my people skills.

Later that night, I snuggled into my husband's back, pressing my knees against the backs of his knees, snaking an arm around his torso and winding my fingers through his. He was the fifth person I had ever slept with, and I had never cheated on him. I couldn't live without him, nor did I want to.

But I couldn't stop thinking about how adamant those commenters were, both about my sluttiness, and about the inevitability of our divorce. Could they know something I didn't?

Not long after the cockblocking piece, I wrote an essay about how Michael and I were trying to start a family. I talked about how I had gone off my antidepressants for the health and safety of my future fetus, and how I couldn't help but worry about what I would do if I couldn't hold my chronic depression and anxiety at bay. I asked readers for their input. They stepped up and offered their very best advice.

"DO NOT HAVE CHILDREN," one commenter pleaded. I imagined her down on her knees, white-knuckled, clutching the hem of my pajama top in a wild frenzy of desperation. I imagined her marching back and forth across my front lawn, sign held aloft, trying to make the point that women with mood swings cannot be mothers.

"You sound as if you are a fairly smart woman," she went on to say. "Bringing a child into your chaos would be unforgivably selfish. Don't be selfish, don't have children. You WILL damage them."

Another commenter made a bold prediction about my marriage. "One thing I WILL say with no hesitation whatsoever, that husband is going to leave," he said. "Sooner rather than later." As he was so certain about this inevitability, he didn't bother commenting on what would happen if Michael managed to get me pregnant.

These comments made my face hot. I could feel a lump in my throat, a prickling behind my eyeballs. I wanted to slide forward out of my seat, slump to the floor, curl up beneath my desk. I wanted to lock myself into the single women's restroom on the floor and cry into a wad of toilet paper.

As I pondered their feedback, I began to realize that crowdsourcing my marital issues was a dangerous game. This lesson hit home about half a year later, when my marriage was indeed on the verge of collapse.

After many unsuccessful attempts to get me pregnant, my husband and I were feeling frustrated, helpless, hopeless. Each of us coped in our own ways. He went bar hopping with his colleagues almost every night, in a gesture of avoidance. I remained home, seething with resentment until — again and again — we ended up screaming at each other, late at night, my ring flung across the room, my foot out the door. Eventually, he posited that we were no longer compatible and suggested a separation.

This time, I couldn't quite bring myself to seek out advice from the Internet. It would only validate everything they had already said, and the thought of substantiating their cruel comments made me sick. After all, if the Internet was right about the fate of my marriage, did that not mean they could also be right about my character? Was I a selfish slut? A whore? A spineless self-saboteur? Was Michael cheating on me? Even my own mother brought up the possibility of infidelity. "Why else would he ask for a separation?" she said.

Instead of laying my problems bare to the blogosphere, I quietly stepped away from my computer and fought for my marriage. After a number of visits with a clinical psychologist, Michael and I patched things up, and our marriage became stronger than ever. Riding high on this marital success, I suppose I was lulled into writerly complacency. I frolicked into my next online personal essay without even considering the fact that we might get slammed again.

I wrote a personal essay on my personal hot-button issue: the guilt I felt over the disparity between me and my husband's incomes, and the even greater guilt I felt over not being driven to pursue a six-figure income. I was desperate to know if, despite my much smaller income, there was still value in what I brought to our relationship. I wanted to know if I was following the right path.

The comments came fast and furious.

"Whiny privileged me me me," one said. "why can't the world give me everything I want without me lifting a finger."

"You SHOULD feel guilty," said another. "I don't know what you do to balance this relationship but hopefully it's something or you'll eventually be alone."

I should have seen them coming, and I should have known they would only reinforce my own self-doubts. When commenters called me selfish and spoiled, I agreed. When they derided me for my part-time hours and my daily yoga practice and my desire for my husband to show his love with time instead of money, I wondered if they were right. I was pretty sure they were at least partially right.

In the midst of this self-doubt, I received an email from someone who told me I was making Michael a slave to my own lifestyle. She pointed out the fact that Michael had once been a copywriter, a gig that led her to believe he had his own writerly aspirations. In reference to my writing career, she wrote, "Was that your husband's dream too before supporting you, giving you babies, and buying a house became his new mission in life?" She insinuated that I had forced him to make six figures in an industry he didn't even like.

In actuality, Michael was stuck in a dead-end job when we first began dating, in an industry he had no passion for, underpaid and desperate to break into web development. He did freelance web work on the side, attended tech Meetups, and also took online classes to further his knowledge. Still, he felt unqualified to make the full-on leap into a different industry, and languished in his copywriting job for seven and a half years.

I was the one who pushed him to take that leap, helping him with his resume and cover letters, and prepping him for interviews. When he landed his first full-time web dev job at a startup in the city, he was over the moon. He's since climbed the salary ladder, gaining valuable experience and even more valuable contacts along the way.

When my husband walked through the door later that evening, he immediately made his way over to me and gave me a smooch on the cheek. "I could tell you needed that," he said. "I read your piece. Those people totally missed the point of your essay. They don't know what they're talking about." He then went on to list all the ways in which the commenters on my essay had shown their cluelessness. When he finished, I hugged him, hard, and for an uncomfortably long time. I thanked God he was my husband.

Being a personal essayist means opening yourself up to public scrutiny on a regular basis. And because people typically aren't interested in reading about those cute sneakers I ordered from Zappos or how good I felt after my morning meditation or how damn happy I am, I focus on the experiences that challenged me; the moments that tested me, my self-doubts, my guilt, my ugliest thoughts.

All I can do at the end of the day is shut down my laptop and communicate with my husband, instead of allowing myself to be distracted by the conspiracy theories of anonymous commenters. Because what matters is that we're okay, and I don't need the Internet to tell me that.

In fact, if I want to find true marital bliss, I should probably stop reading the comments altogether.