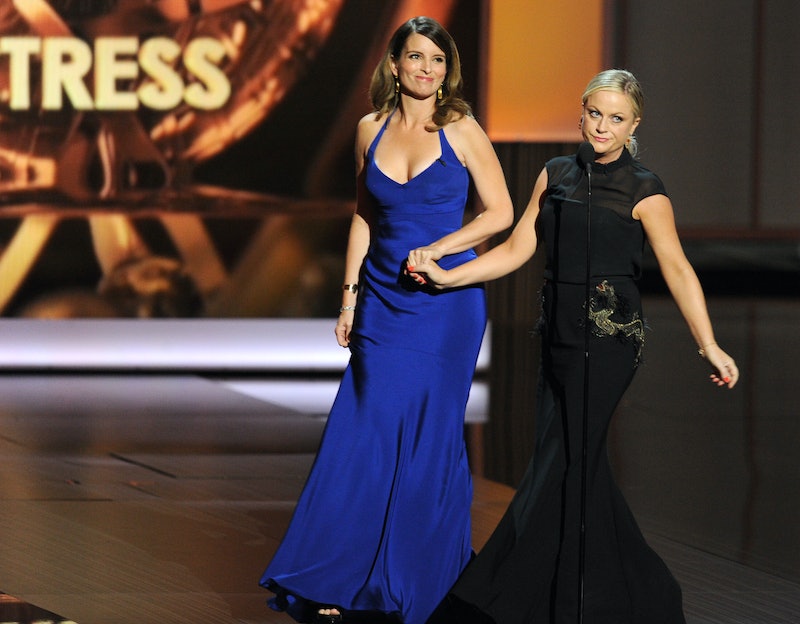 Dear Awards Show Powers That Be: Please hear this wish. Let Amy Poehler and Tina Fey host the Golden Globes again in 2016. The 2015 Golden Globes will be the third time that the duo has hosted. After their initial success in 2013 (following the controversial Ricky Gervais), Fey and Poehler signed a contract to host the Golden Globes for the next two years. Which means (for you non-math wizards out there), that Sunday, Jan. 11's Globes is the last contracted appearance the two women have. Say it ain't so!

Just because another contract hasn't been drafted doesn't mean Fey and Poehler are over hosting the booziest of the awards shows, right? Right?! I mean, who could say no to that gig? Fey has been done with 30 Rock for almost two years now; Poehler has finished filming Parks and Recreation . It's not like they have books to write, movies to film, or other TV shows to work on or anything.

Although their schedules seem pretty clear to keep hosting the Golden Globes until the foreseeable future, Poehler feels differently (whaaa?). When Poehler went on the Today show in Oct. 2014 to promote her book Yes Please, she discussed hosting the Globes with Fey again and said, "It's the law of diminishing returns, which is why this is our last time. … Unless you want to be a perennial host, there's nowhere to go but down."

No! First Parks and Rec ends, now this? Will there be any joy in the year 2016?! But I am not one to accept defeat. And Poehler also said in that same Today interview with Matt Lauer and Hoda Kotb, "It'll be like our farewell tour. We'll be the Jay Z of the Globes and never retire." Never retiring sounds good to me. Plus, Fey hasn't said anything definitive about hosting yet.

The executive producer of the Golden Globes, Barry Adelman, is also keeping the faith. He told Variety, "I hope maybe they change their mind and come back, but I’m not even going to think past this year. I want this to be a great send-off. That’s what I’m concentrating on."

If the pair really is done with the Globes — and the show wants to stay with two people hosting — we here at Bustle have some other great duo suggestions. What about a British invasion with Benedict Cumberbatch and Tom Hiddleston? Cumberbatch will have a baby to take care of by next Jan., but I think he could manage it.

Or how about longtime Boston buddies Ben Affleck and Matt Damon. Just the idea of Affleck and Damon teaming up to host makes my Good Will Hunting-loving heart flutter in excitement. And those two guys aren't busy or anything, right? Maybe Sarah Silverman (who was her own hilarious spectacle at the 2014 Emmys) and Jimmy Kimmel (who cares if Silverman and Kimmel are no longer dating?) could even show up to perform "F*@#ing Matt Damon" and "F*@#ing Ben Affleck."

But back to Fey and Poehler — when it is announced who is actually hosting the 2016 Golden Globes (and if it turns out not to be them), us fans do have something to look forward to. The women will be starring in Sisters (formerly titled The Nest ), which features the two as adult sisters (looking alike doesn't matter when you have comedic chemistry like theirs) throwing one last house party at their parents' house before they sell it. It is scheduled to be out Dec. 18, 2015 and Poehler told Entertainment Weekly that they want to "f---ing crush Star Wars" (which has the same release date).

Well, if Fey and Poehler won't be back for the fourth time hosting, I may need to see Sisters again in theaters the day of the 2016 Golden Globes. You'll find me softly sobbing into my popcorn and Cherry Coke, reminiscing about the good ole' Golden Globe days.

More like this
'The Undeclared War' Spotlights The Real-Life Threat Of Cyber Attacks
By Maxine Harrison
Everything To Know About 'Persuasion,' Netflix’s New Jane Austen Film
By Nola Ojomu and Radhika Menon
Amber Heard Says She Fears Being Sued By Johnny Depp Again
By Jake Viswanath
Here’s Everything Coming To & Leaving Netflix In July
By Grace Wehniainen
Get Even More From Bustle — Sign Up For The Newsletter