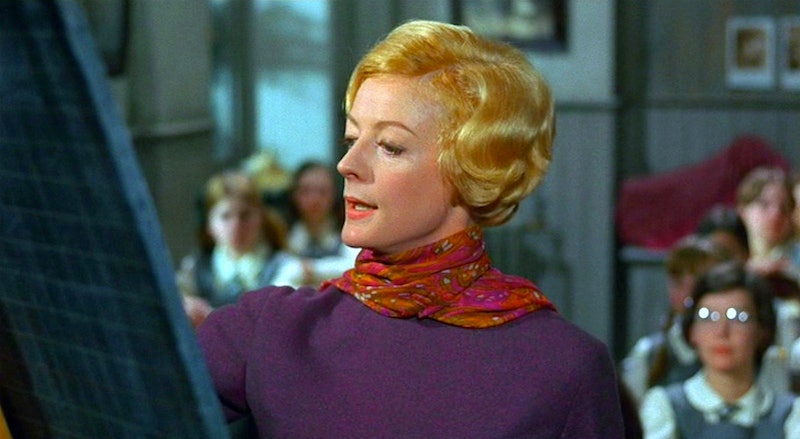 Great literature is filled with glorious, romantic heroines who sacrifice themselves for all kinds of noble reasons. The slightly less morally motivated anti-heroines, however, are the ones who seem to stick with me. Maybe it's because they're more representative of real women — certainly not all good, definitely not all bad, and totally unafraid to think outside the box.

When I need some encouragement to be a better self-advocate, or maybe just a little inspiration to stand my ground, I look to my favorite anti-heroines for a bit of backbone. Even if I don't always always exactly agree with their methods or motivations, I admire the way these literary ladies get the job done. Bold, brilliant, and usually a bit manipulative, they rely on their brains to get by. They're also the characters who are often ostracized and shunned for refusing to abide by the rules or bend to convention. In other words, these literary anti-heroines are true to themselves above all others.

The next time you find yourself in need of some swagger, look no further than the following list of life lessons imparted by literature's most badass anti-heroines. They don't mess around, they take no prisoners, and they go after what they want.

Lisbeth Salander, The Girl With the Dragon Tattoo

Badass-ness factors: Obviously Lisbeth would be at the top of this list, where do we even start? Fiercely independent, neurotic, and totally unafraid to take down a bully, she's the poster child for anti-heroines. Her brilliant vigilante tactics are motivated as much by a need for revenge as they are by a desire for justice.

The takeaway: Although you may not be able to replicate Lisbeth's hacking skills or proficiency in hand-to-hand combat, you should be able to stand up for yourself. Whether this means confronting a belittling boss or ditching a toxic frenemy, take a page from Lisbeth's book and be your own savior.

The White Witch, The Chronicles of Narnia

Badass-ness factors: Whatever else she may be (potential murderer, probably sociopath), the White Witch is most definitely in charge, and man does she know how to dress the part. She controls and maintains her environment through sheer force of will, and she knows her enemies as well as she knows herself. Basically she takes control freak to a whole new level.

The takeaway: The idea of power-dressing should not be taken lightly. If you want to be perceived as a leader, you better look like one. You want to be the boss? Acting the part is half the battle. Know your competition, and conquer with confidence.

Badass-ness factors: Her motivation and mental health may be questionable, but Amy does frame her philandering husband for her murder and gets away with it. She's an incredibly smart (if misguided) woman, who is willing to go to any lengths to punish perceived transgressions.

The takeaway: I'm not recommending that you emulate Amy's pathological perfectionism, but her ability to focus and attention to detail is extraordinary.

Whether your goal is to have a more healthy lifestyle or to be a tarot reader, make a detailed plan and follow through. Amazing Amy says go big or go home, people.

Badass-ness factors: Sula just flat-out disregards societal conventions. She doesn't think they apply to her, and so she remains fiercely independent despite her "disadvantages"— the racist environment she lives in, her socioeconomic status, and the fact that she's a woman.

The takeaway: You should never stop fighting for the life you want. Nobody else can dictate the kind of person you should be, or where you should live, or what you should do with your life. Sula is far from perfect, and she often ignores other people's feelings the way she ignores society's rules. But she never gives up the struggle for something more.

Badass-ness factors: Yes, yes, she's a vindictive, husband-stealing psycho, but she also fearlessly goes after what she wants. It's unfortunate that she generally wants other women's husbands, but she's an undeniably clever, ambitious, and persistent woman. Zenia's only ever looking out for number one, and although it may be monstrously selfish, she always gets whatever (or whomever) she sets her sights on.

The takeaway: Don't be afraid to get after it. Women are so often taught that we need to nurture, to step back and let other people shine. While there's nothing wrong with being a caring person, there's also something to be said for whole-heartedly pursuing your own agenda. Being single-mindedly driven and ambitious doesn't make you a bitch. It makes you a boss.

Badass-ness factors: She's manipulative, overbearing, and a bit of a bully, but Miss Brodie always stands firmly by her beliefs. An incurable, if slightly delusional, romantic, she tries to convert her pupils to fascism and get them into bed with a fellow teacher, but her intentions are (mostly) good. Absolutely convinced that she in in the prime of her life, she pursues her bliss with all the determination and enthusiasm in her vibrant, crazy soul. (And yes, that is the incomparable Maggie Smith steaming up the screen as the eponymous Brodie).

The takeaway: Aspire to greatness and believe in the strength of your own convictions. Brodie never let anyone get her down. So what if your parents don't like your boyfriend? Who cares if everyone thinks you're crazy for quitting your job to backpack through South America? Even if it backfires every once and a while à la Miss Brodie, living your life on your own terms is worth it.

Rachel Watson, The Girl on the Train

Badass-ness factors: Rachel isn't beautiful and calculating like so many of the other anti-heroines on this list — in fact she's an absolute, utter mess. She's an unemployed, falling-down drunk who's obsessed with her ex-husband and refuses to move on with her life. Yes, she is frustrating. But the reason you have that urge to shake her while shouting you're better than this! is because you know she is. Despite the fact that she stalks her ex-husband and shotguns canned G&Ts for breakfast, she's a good person. She cares, she tries, and damn it, she gets justice for Megan Hipwell.

The takeaway: Follow your gut. Rachel knew that she saw something, she knew deep down that something terrible had happened to Megan, and she kept working away at it until she got the answers she needed. If you're having niggling doubts about moving in with your boyfriend, or have an uneasy feeling in the pit of your stomach when you think about taking that new job, don't do it. You know yourself better than anyone — trust your instincts.

Sugar, The Crimson Petal and the White

Badass-ness factors: Sugar is a prostitute in Victorian England, but despite the odds being overwhelmingly against her, she refuses to settle for her lot in life. She seduces a creepy, sniveling, rich man into not only falling in love with her, but also ensconcing her in his home as the governess to his child.

The takeaway: You can change your life. No matter how difficult it may seem, you can, in fact, live the life you've always dreamed of. If Sugar can pull herself out of prostitution in Victorian London, you can become a novelist, or a certified yoga instructor, or move to Paris, or whatever. You just have to want it badly enough.

Cersei Lannister, A Song of Ice and Fire

Badass-ness factors: Gah, what is it about Cersei? She has an incestuous relationship with her brother that results in children, she's pretty much a homicidal maniac, and she's downright mean, but I care what happens to her. The mark of a true anti-heroine, I guess. Cersei knows she'll never be taken seriously because she's not a man, so she uses power and sex, the tools at her disposable, to get to the throne.

The takeaway: I'm not advocating that you abuse power or award sexual favors to get what you want, I'm simply saying that Cersei won because she was willing to look outside the box. Sometimes it takes a little creative thinking, some grit, and a whole lot of determination to come out on top, but the extra effort and ingenuity will pay off.

Scarlett O'Hara, Gone With the Wind

Baddass-ness factors: Where to begin with Scarlett? Cunning little minx that she is, she survived the Civil War, several husbands, a broken heart, and still managed to save Tara. Scarlett is a survivor, and no matter what obstacles life throws in her path, she straightens her back, digs in her heels, and refuses to give in. She also stole her sister's fiancé and tried to seduce her friend's husband.

The takeaway: Don't take no for an answer. Unless you're trying to steal your sister's fiancé or your friend's husband. Refusing to throw in the towel when the going gets tough is the mark of a true badass, because in the words of Scarlett herself, tomorrow is another day. If she can live through the Civil War, you can get into that graduate writing program.

Hatsumomo, Memoirs of a Geisha

Badass-ness factors: OK, Hatsumomo is more likely to be classified as a straight-up villainess than an anti-heroine, but I know I'm not the only one who finds her indomitable spirit and sheer willpower fascinating, and kind of inspirational. Yes, she's the ultimate mean girl and pulled some heinous tricks on Sayuri, but it was in the name of survival.

The takeaway: Even if the odds are spectacularly against you, go down swinging. If you end up losing, at least you'll know that you gave it everything you've got. Whether someone is trying to sabotage your career, or just getting unnecessarily snarky on social media, stand up for yourself.

Badass-ness factors: Emma wants a life full of beauty, admiration, and most of all, passion. And so she pursues it, with no regard for reality, or consequences. It all ends in tragedy of course, but the way Emma embraces her sexuality and her need for intimacy in the face of social censure was truly pioneering at the time, and nothing short of heroic.

The takeaway: Embrace who you are. Even if it's easier to be normal, or average, or whatever, you can't hide your true self forever. Nothing will ever feel as good as just being the most authentic version of yourself.

Badassness-factors: Susan feels responsible for the death of her husband. He was in the wrong place at the wrong time, pushed into hastily leaving the country after finding her in flagrante delicto. She feels guilt and loss, yes, but she also admits to feeling free. Instead of hiding behind a false façade of grief, she choses to continue searching for pleasure, satisfaction, and fulfillment

The takeaway: People make mistakes and other people get hurt. Rather than being a martyr, Susan acknowledges her transgressions, accepts responsibility, and carries on with her life. Wallowing in regret and guilt, or worse still, faking it, doesn't change or fix anything. Sometimes there's just no righting a wrong, and the only thing you can do is move on.