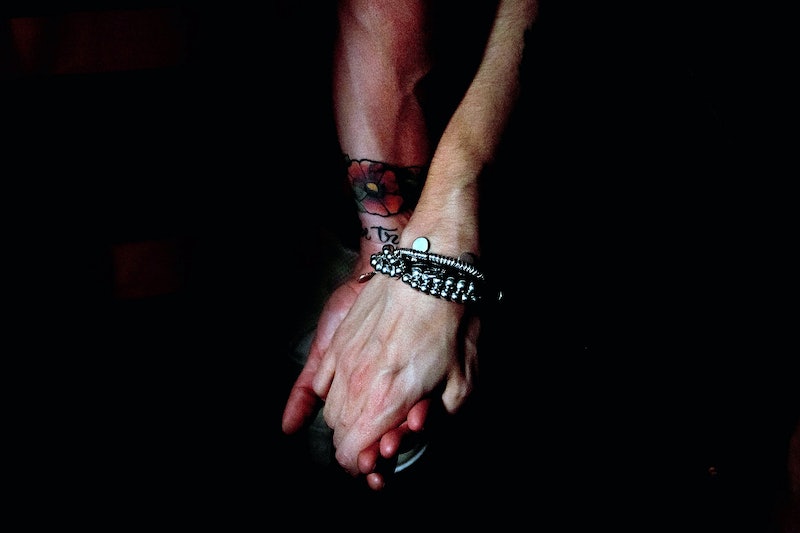 Whether you're a romantic soul or a cynical love-hater, it's pretty much impossible to ignore the love around you on Valentine's Day. I usually tend to fall somewhere in-between the Valentine's day spectrum — I've never taken it seriously (aka been highly upset when my boyfriend didn't hand deliver flowers and chocolate), but have used it as an excuse to cuddle up with a movie and pizza.

And really, that's the great thing about this "Hallmark holiday" — you can celebrate it however you want, because everyone's view of love is different. Whether you're spending it with your bae, your girlfriends, your mom, or yourself, it's a time to celebrate love in any way that it exists — even if it's a little bit unconventional.

This year, instead of reading novels full of traditional romances, I'm going to sift through some of my favorite offbeat love stories — ones that follow stories of forbidden secret romances, cyber-loves, and even the lifelong relationship between a boy and a tree. Here are 11 unconventional love stories sure to make anyone swoon:

Love in the Time of Cholera by Gabriel García-Márquez

Ah, forbidden love. Love in the Time of Cholera is the story of Florentino and Fermina, who fall in love at a young age and start a secret relationship made possible with the help of Fermina's Aunt, who delivers love letters between the two until Fermina's father finds out and forces his daughter to cut off communication with Florentino. What makes this truly unconventional, though, is Fermina's struggle with a romanticized relationship. Does she really love Florentino, or does she love the version of him she's envisioned from his letters?

The film that turned Jennifer Lawrence from Katniss Everdeen to an Academy Award-winning actress, Silver Linings Playbook is worth a read in addition to a watch. While the movie does a wonderful job of exploring Pat Peoples' (Bradley Cooper) theory that his life is a movie produced by God, all to ensure that gets his happy ending and restores his relationship with his ex-wife (all while also pursuing a bizarre friendship-turned-romance with Tiffany, an unstable widow), the book dives even deeper into the eccentric relationship of these misfit characters.

Known as a one of the first artistic novels to highlight complex representations of homosexuality to a broader audience, James Baldwin's Gionvanni's Room tells the story of David, an ex-pat living in 1950s Paris, and his struggles with his sexual identity. After proposing to a young woman, David catches himself in a passionate affair with Giovanni, an Italian bartender — an extremely non-traditional and often dangerous relationship for the era. Giovanni's room is not only a complicated and beautiful novel, but it also marks an important moment for gay literature.

Rainbow Rowell's Fangirl is a staple read when it comes to unconventional love stories — it's a first love formed through fanfiction. Cath, who's an insane fan of the fictional Simon Snow series, is told by her sister and forever best friend Wren that she wants some separation when they go off to college. Fangirl follows Cath as she navigates being alone, dealing with an English professor who thinks that fanfiction (aka everything she's ever believed in) is a load of baloney, and — most important for this list — her first-ever romance with an upperclassman named Levi, the boy she deems worthy enough to read some of her infamous stories.

The Giving Tree by Shel Silverstein

The unconventionality of Shel Silverstein's classic children's book The Giving Tree pretty much goes without saying: it's the life and love between a boy and an apple tree. The Giving Tree remains an important story about finding balance and happiness in a relationship.

Goodbye For Now by Laurie Frankel

Probably the most "modern romance" on this list, Goodbye for Now will resonate with anyone who has ever online dated (whether it was successful or not). Sam, a frustrated single guy who works at an online dating company, creates an algorithm that matches him with Meredith, a coworker turned love-of-his-life. The story gets crazy, though, when Sam programs an online version of Meredith's deceased grandmother and he and Meredith go into business to do the same for others who have recently lost a loved one. It's totally weird but somehow still charming — and extremely reminiscent of an episode of BBC's Black Mirror .

High Fidelity will forever and always be my go-to post-breakup read. It's narrated by Rob, a record store owner and pop music lover whose girlfriend leaves him for the guy upstairs. Rob is somehow both cynical and optimistic, and processes everything going on in his thirtysomething life by creating top five lists, dating a too-cool indie singer, and analyzing past relationships. In the end, it's optimistic — making it the perfect love story for skeptics.

Many new marriages are hard — but imagine getting through your first few years while simultaneously struggling to survive the German economic collapse just before the rise of Hitler. Little Man, What Now? is an inspirational story that shows the power in unconditional, old-fashioned love.

The Rosie Project by Graeme Simsion

Don is a genetics professor who's decided (quite scientifically) that he's ready to find a wife. He designs "The Wife Project," a thorough survey that filters out of all his "deal breaker" partners (smokers, flakes, etc.), and finds Rosie, who has all of these qualities. They work together to create a similar survey to help Rosie find her biological father, and become closer than either of them expected.

Pride and Prejudice by Jane Austin

I couldn't not include some Jane Austin on this list. The story of five unmarried daughters and two high status bachelors who just moved in nearby, Pride and Prejudice is a prime example of an unconventional romance that, in many ways, has remained relevant for more than 200 years.

Above all, Haruki Murakami's Norweigan Wood is a story of difficult, frustrated love. It follows Toru and Naoko, who have grown closer since the death of their mutual friend Kizuki. As Toru goes to school and adapts to loneliness and isolation, Naoki has the opposite reaction — she struggles and gets trapped in her own mental state. It's a beautiful, poignant story of coming-of-age hopeless romantic love.