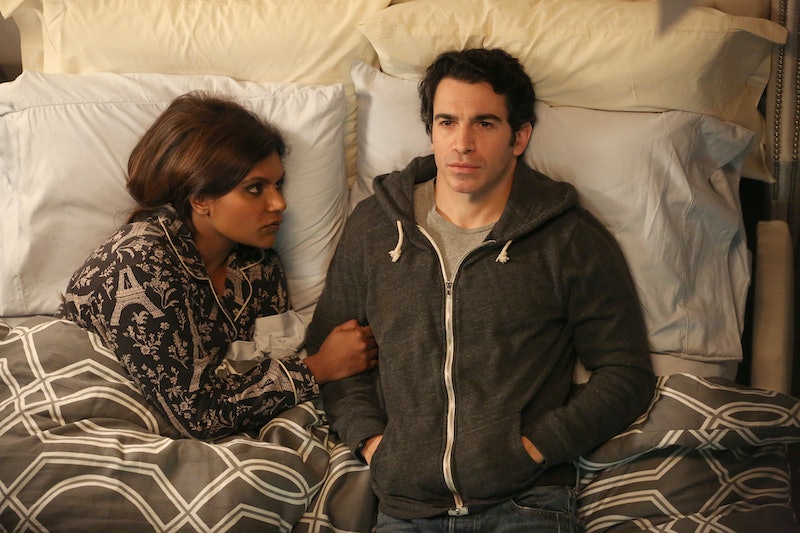 The good news is, those of us who watch Fox's The Mindy Project know that Mindy Kaling's comedy is simply THE BEST. The bad news is, we're definitely in the minority — the show has struggled in the ratings all three years it's been on the air. It has firmly been "on the bubble" at the end of each season, but has managed to procure a miraculous renewal twice so far. Will the third time be the charm? Or will The Mindy Project finally be canceled after seasons of ratings woes?

Let's take a look at the numbers: the most recent episode, "San Francisco Bae," pulled in 2.42 million viewers with a 1.1 rating in the key 18-49 demographic. That's not good. In fact, it's down a full million pairs of eyeballs from the 3.4 mil that tuned into Season 2, on average — which was itself down from the 3.7 mil that Season 1 averaged. Those numbers were about on par with its time slot competitor, the certain-to-be-cancelled NBC sitcom About A Boy. That show actually had more viewers (2.79 million), although it didn't fare as well in the ratings (0.9). So if that show is all but certain to meet its maker at the end of this season, doesn't that mean The Mindy Project is, too?

Not so fast. Although ratings are just numbers, the science behind analyzing them is anything but straightforward. First of all, it's important to remember that programs are only competing with other shows on their own network. All of The CW's shows combined probably don't pull in as many viewers as CBS's The Big Bang Theory (the highest-rated broadcast series), but they're not all getting axed; The CW actually just renewed its entire roster because, per the network's standards, all of its shows are doing fairly well.

So how does Mindy compare to Fox's other comedies? Well, it's certainly doing better than freshman sitcom Mulaney, which was one of the first casualties of the Fall 2014 season. Excluding the network's animated offerings like The Simpsons, Family Guy, and Bob's Burgers, its highest-rated comedy is New Girl, whose most recent episode earned a 1.5 rating. Better than Mindy... but not by much. Then there's Brooklyn Nine-Nine, which has already been awarded a Season 3 renewal, despite the fact that its most recent episode only earned a 1.2 rating, barely besting Mindy.

Mindy may be the bottom of the Fox comedy barrel, but it is not hopelessly far behind its network competition. In fact, popular ratings analysis site TVByTheNumbers has Mindy classified on its Renew/Cancel Index with the highest possible ranking: "Certain to be Renewed." How can a renewal be certain with such low ratings, especially when higher-rated Fox shows like New Girl, Bones, and Sleepy Hollow are only ranked as "More Likely to be Renewed than Canceled"? One word: syndication.

Syndication is when the rights to air re-runs of a program are licensed to a network other than the one the program first aired on. There is a so-called "magic number" of episodes a show has to reach before it can be sold into syndication. These days, the general consensus is that the magic number is 88. I'll let TVByTheNumbers explain:

What's so magical about 88 episodes? The prevailing Hollywood mindset is that 88 episodes is the minimum number of episodes necessary to be able to "strip" a show in syndication, i.e., run it Monday-Friday at the same time. All shows, regardless of number of episodes can be sold into syndication, but shows that can be stripped can command higher per-episode pricing. The magic number for being able to strip a show in syndication used to be "100" but at least for the last few years it has been 88.

With a typical broadcast order of 22 episodes per season, it takes any given program four years to reach that number. So any series that lasts for 66 episodes (i.e. three seasons) is pretty much guaranteed a fourth season renewal just so it can reach 88 and make money off of syndication. Things didn't look good for Mindy when Fox only ordered 15 episodes for Season 3; but fate smiled on Schulman & Associates this past November, when the network ordered an additional six episodes, bringing the season to 21 episodes — and the show to 67, well within striking distance of that magical number.

That is why, despite its modest ratings, The Mindy Project is basically guaranteed to be renewed for Season 4. Let's all celebrate by watching Danny's striptease for the one bajillionth time:

More like this
Twitter Can’t Believe The Madonna Biopic Is Scrapped & Fans Have A Solution
By Alyssa Lapid
'The Last Of Us' Episode Schedule Competes With The Super Bowl & Oscars
By Brad Witter
'The Last Of Us' Episode 4 Put Twitter Into An Emotional Spiral
By Alyssa Lapid
Grammys Host Trevor Noah Made Adele's Dream Of Meeting The Rock Come True
By Brad Witter
Get Even More From Bustle — Sign Up For The Newsletter
From hair trends to relationship advice, our daily newsletter has everything you need to sound like a person who’s on TikTok, even if you aren’t.