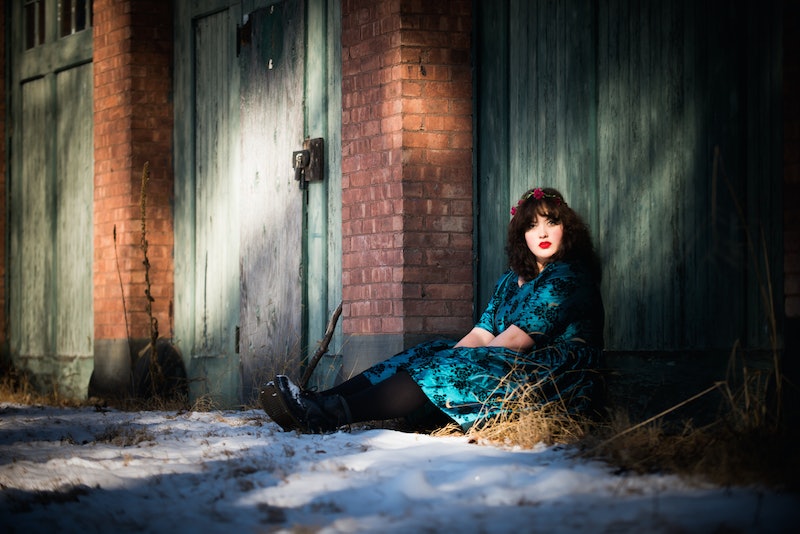 As something of a fashion person, I'm used to talking, writing and thinking about clothing quite frequently. I'm also used to being belittled for this fact. There has long existed a stereotype that women who are interested in sartorial matters must not be interested in anything else. And I would be lying if I said I didn't sometimes worry that my career of choice is also accompanied by the pre-judgment that I'm a "non-intellectual" or something of the sort. But most of the time, I don't care. I'm able to see fashion as a means to self-expression (one of the most basic and intrinsic ones we have — and one that we all participate in, be it consciously or otherwise). I'm able to see the artistry in design — in tailoring, in embroidery, in sketching something and having it come to life. I'm able to see the power and inspiration in sub-cultures within the industry (like size acceptance in fashion) that lead to progressive actions. But I'm also able to see when fashion should be left out of an equation: When it is inappropriate, even. And when talking about it truly is unwise.

Like most things in this world, there is a time and a place. I don't expect to enter into a mind-blowing conversation about Gabriel García Márquez's literary genius when I'm with my teenage cousins-in-law, rocking out to Taylor Swift. I don't have any desire to talk about why it's time for women to start questioning the pill from a feminist perspective when visiting my dad at his antique car restoration business. And I never go to work at 9 a.m. ready to tell my colleagues about the hot morning sex I just had (although I'm sure I wouldn't be chastised if I did, because I work at a super cool place with super cool people). The same goes for fashion. I'm happy to defend my love of clothes almost anywhere. I'm happy to tell people where I bought my dress almost anytime. But the keyword in both scenarios: ALMOST. Here are the exceptions to the rule — the times when you really shouldn't ask a woman about her wardrobe:

When At A Funeral

This happened to me recently: When attending a friend's funeral service, one of the first things someone I [sort of] used to know as a teenager asked me was who I was wearing (phrased more along the lines of, "O.M.G. Where did you buy that dress?"). I completely think there's a place for this question. Like, you know, on the red carpet, or in a regular, everyday conversation when someone's outfit catches your fancy. Granted, some argue that women shouldn't be asked this question ever again, but the reality is that fashion is important. It holds merits of its own, and is worthy of a platform. But to disturb someone in a space for mourning isn't just inappropriate: It's also completely insensitive to the memory of the person being mourned. And kind of suggests that your main concern during such a difficult time is your dress.

Amal Clooney has been making headlines as of late for her representation of Armenia in the country's genocide trial. As a prosecutor of war criminals, she is currently challenging the appeal of a Turkish politician who claims that his country did not carry out the genocide of the Armenian people. She was at the European Court of Human Rights doing as much when a reporter asked her who she was wearing. As Jezebel reports: "'I'm wearing Ede & Ravenscroft,' Clooney retorted, referring to the company who has been making the formal legal wear worn by judges and lawyers in Europe for centuries." Clooney is one hell of a woman, and what she is doing not only demonstrates her brilliance and intellect, but also her compassion. This time, the reporter should have asked her about her work — not the label in her outfit. Just as all women being celebrated for their professional, academic or intellectual merits should first and foremost be asked about those merits.

When The Person You're Talking To Is Sick

Like most people currently on the East Coast, I'm pleasantly hacking away — filled with bronchitis and a lung infection to boot. In the past week, I've made it quite clear to friends and relatives that I want nothing but to lay in bed, streaming One Tree Hill on Netflix because #nostalgia. And yet, a good amount of people have still texted or Tweeted questions about clothes. Whilst I understand that I work in fashion, and people will be curious about these things — and that's OK — I do feel that when you know that your friend, sister, cousin or whoever else is super sick, you should try asking her if, I don't know, she needs help with anything. Like maybe making a bowl of soup...

When You Just Want To Make A Joke

To a lot of people, fashion isn't just a job: It's a passion, a love and a source of daily inspiration. So don't belittle that by turning it into the source of a joke. When a woman says something you deem "intellectual" or "thought-provoking," don't jump all over those, "But I thought you were only interested in pretty dresses," comments. This just in: Humans are multifaceted beings (at least we like to think so). And this is accompanied by having a variety of interests, concerns and (yes!) thoughts.

When She's Trying To Talk About Something More "Serious"

If I'm trying to talk to you about something quite serious and important, like gay marriage perhaps, please just hear me out. Don't be distracted by the pink, polka dot dress I'm wearing. It has nothing to do with this conversation. If you'd like to discuss its amazing felt polkas and tulle panelling, I'd be happy to do so after. But interrupting me when I'm discussing the plethora of reasons why same-sex marriage does not destroy the sanctity of the union makes you look bad. And makes me feel silenced.