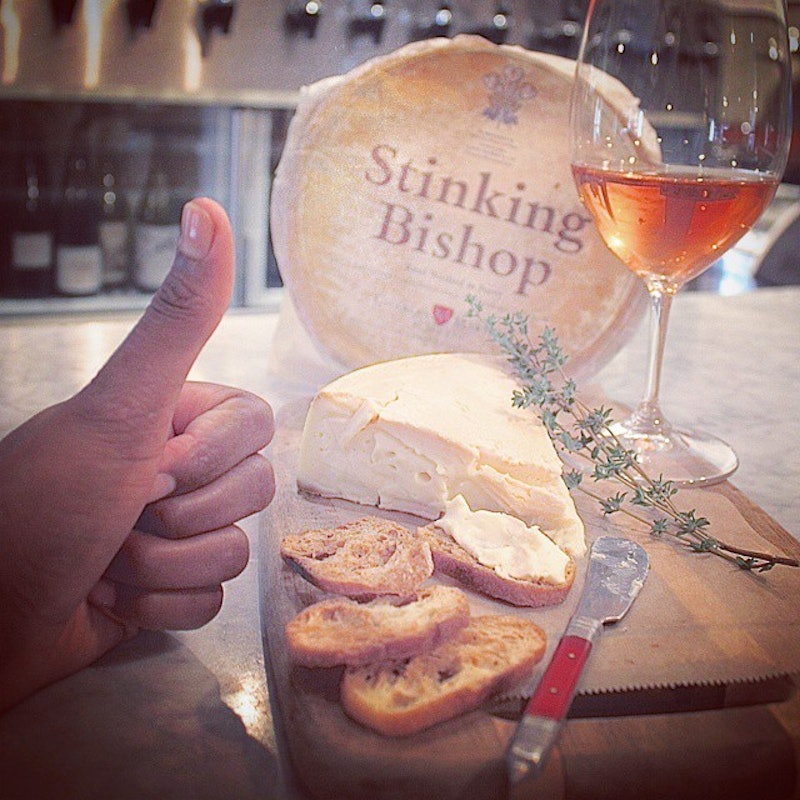 I'm fairly culinarily fearless. I can't have alcohol for medical reasons and anything with too much chilli or carbonation spells bad times, but if it's texturally weird, strange-smelling, or involves the words "fermented," "rotted," "blood," "organs," or "bizarre regional delicacy people trick tourists into eating," I am there with a bowl. But outré cheese has never been my cup of tea. A tasty cheddar is one thing, but the serious, prize-winning wheels soaked in unimaginable substances and left to fester until they develop sentience? Never. Which means, obviously, that if I was going to get a cheese education, I had to try the stinkiest cheeses in the world .

No entry-level piddling brie for me; I went seriously hardcore, and because I'm in England, I could source stuff that's actually illegal in the U.S. The results opened my eyes — as well as scouring my sinuses.

The worthwhile experiment: I needed some help in my pursuit of cheese-based punches in the face; a lot of seriously smelly cheeses have had their rinds washed in alcohol, which means I can't touch their outer hard bits. So I got in two pinch-hitters: my husband, and my mate Alice. (I am so sorry, Alice.) We stored the offending dairy in airtight cake tins and layers of Saran Wrap, covered the table in biscuits, water, and chocolate to stave off nausea, and dived in.

As a testament to just how badly smelling these things were: a very badly behaved dog was in the room for the first three taste trials, the kind that regularly eats other dogs' poo and regards fetid compost as his personal gourmet pantry — and he didn't even go near them. This was some Serious Disgusting Smelly Cheese. But it was an interesting journey. Here's what happened...

What it is: Rainbow's Gold seems to have been produced by a prankster trying to make his farmer mates gag. It's made from unpasteurised cow's milk in the county of Somerset in England, and washed every day for several weeks with golden ale, until it smells so incredibly strong that it could make your hair curl if you accidentally stood half a mile downwind.

Smell: "Gym gear sweat. You know, the smell you get on gym mats that haven't been used for a while?" "The underside of a Casio wristwatch in summer." "Smelly feet. Really, really smelly feet."

Taste: "Um. It tastes like somebody buried my cheddar cheese in the compost and then dug it up again. I think I'm going to be sick." "A very, very tangy cheddar." "Sweet, but the rind is awful. I can smell it from here. Are you supposed to eat that?!"

Verdict: A truly horrible, sticky smell from a profoundly ripe cheese. The actual cheese bit was all right, but I've never felt so reminded of teenage bodily excretions by a foodstuff. It's Proust's smell-memory crossed with a Nine Inch Nails album.

What it is: Morbier, a cow's milk cheese from the French mountains, is recognizable by the layer of ash that runs through its middle. It used to be made with two different layers of cheese, from morning milk and evening milk, but nowadays the manufacturers just add in the ash line to keep it looking cool.

Smell: "Grass cuttings, going off in summer." "The inside of a food waste bin. It's that rotting vegetable matter thing. Sweetness on the edge of decay." "Baby poo. Seriously, it's just like baby poo."

Taste: "Creamy aftertaste, but sharp as sh*t." "It's a little bit like cider vinegar." "Sweet, but ... odd. Still getting the baby poo thing."

Verdict: This one actually tasted fine, which surprised me. Despite the severe psychological road block of tasting something that smelled like compost or a baby's diaper, it was pretty chilled out.

What it is: This is famous, the Big Daddy, the serious connoisseur's stinky cheese. Ours wasn't sufficiently ripe enough to be truly overpowering (it's hard to ripen a cheese when you're living in a house that's about five degrees Celsius), but it was still horse-faintingly strong. It's washed in perry cider in Gloucestershire, and it had a cameo in the film Wallace & Gromit, where it's used to bring a character back from the dead. That now seems like an entirely rational proposition.

Taste: "The middle bit tastes like smoke." "Nutty sweet cream cheese. Yeah, this definitely wasn't ripe enough, the last time I had Stinking Bishop I had to scrape off my tongue with a knife." "Acrid. Seriously, I am going to be sick." [This was Alice. She wasn't sick. She did, however, not expose herself to the final two cheeses. Because she is sensible.]

Verdict: We didn't get the true horrific power of the Stinking Bishop, which makes me grateful, because goddamn. Goddamn. The sleeping power of that thing should be used by the military. STINKING BISHOP FIRE IN THE HOLE.

What it is: This is a bit of a gourmet cheese. It's Camembert, the famous soft cheese you'll see at pretentious college parties, soaked in Calvados liqueur and then covered in breadcrumbs. The Calvados treatment, unsurprisingly, is what makes it deadly.

Taste: "I mean, it tastes great if you like Calvados and really, really strong cheese."

Verdict: I couldn't taste this one because it was literally so soaked in alcohol you could squeeze it like a sponge, but its seriously unnerving dog-poop smell means that I'm not too upset about that.

What it is: Epoisse is a French cow's-milk cheese, and it's so pungent that it's actually banned on French public transport . Literally, if you buy this thing in France, you are getting a cab or walking home. It's that legendarily pungent. It's smeared in brandy continually, so it's both smelly and spoilt. Fun fact: it is completely illegal in the U.S. Free the cheese!

Smell: "Oh, god, it actually singes your sinuses slightly. It smells like the gunk that accrues under your toenails." "I was going to say rotten eggs, but yeah, that too."

Taste: "Wow. It, er, doesn't taste as much like the devil's asshole as I was expecting?" "It's a perfectly normal, sweet brie with a massively bitter aftertaste." "What aftertaste? Oh. OH. Yes. Sulphur ahoy."

Verdict: This was another that hadn't ripened to its full nostril-searing potential, but the smell wasn't actually a huge turn-off. If you like sweet things that turn around and punch you in the tonsils after a minute and a half, it's a fun ride.