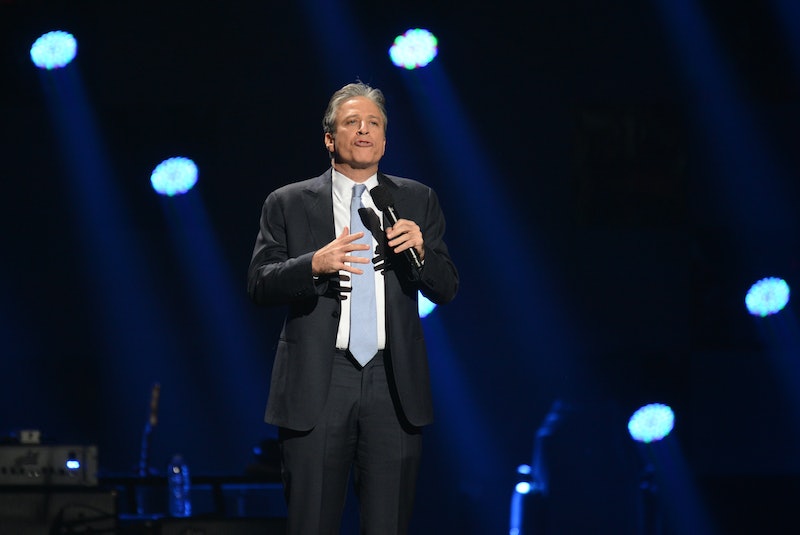 While there are actually plenty of legitimate reasons why everyone shouldn’t find Jon Stewart's Daily Show departure all that surprising, all the preparation in the world still wouldn’t have succeeded at taking the sting out of the news that the political satirist/comedian is leaving his post. After all, throughout his 16 years on the job (save for that short hiatus he took to film Rosewater ), Stewart’s brought his audience a ton of memorable moments — and, if there’s one thing he’s taught us, it’s that he has totally mastered the art of the takedown.

Clearly, his mass appeal is a large part of why folks want Stewart for president, and it's not just because he rarely has a hair out of place. It’s difficult to gather all of Stewart’s most epic takedowns in one place because the list is endless: He’s single-handedly tackled a plethora of opponents, verbally taking down everything from sexism to Sarah Palin to CNN’s Blizzardmobile.

In honor of the Emmy-winning talk show host leaving his Comedy Central post, here’s a look at 7 of Jon Stewart’s most memorable takedowns:

Although this was far from his only time calling out the GOP, Stewart earned extra cool points during his live Election Night episode of The Daily Show for incorporating a Game of Thrones reference into his verbal smackdown.

Sam's sexuality was met with resistance from many of the leagues' managers who opined that his coming out would hinder his progress as a professional football player, but Stewart addressed the overwhelming homophobia in the most passionate, yet humorous way.

In one of his most thoroughly executed takedowns, Stewart called out Fox's questionable Ferguson coverage and the hosts' claims that the story had nothing to do with race.

Stewart's analysis of the anti-vaccination movement in a segment titled "Les Measlesrables" is a must-watch.

While O'Reilly's bad-mouthing Queen Bey rendered most of us perplexed and speechless, Stewart did the honor of outing the "Mayor of Bullshit Mountain" as an undercover member of the Beyhive.

The Bachelor's Juan Pablo and the 2014 Sochi Winter Olympics

In addressing Vladimir Putin's anti-gay rhetoric and the 2014 Sochi Winter Olympics, Stewart's hilariously (and accurately) pegged the reality star as a medal contender at the "Homophobic Olympics."

The media-driven Ebola hysteria made Stewart, well, hysterical. As a result, he went to extreme lengths to take down the nationwide panic over the disease.