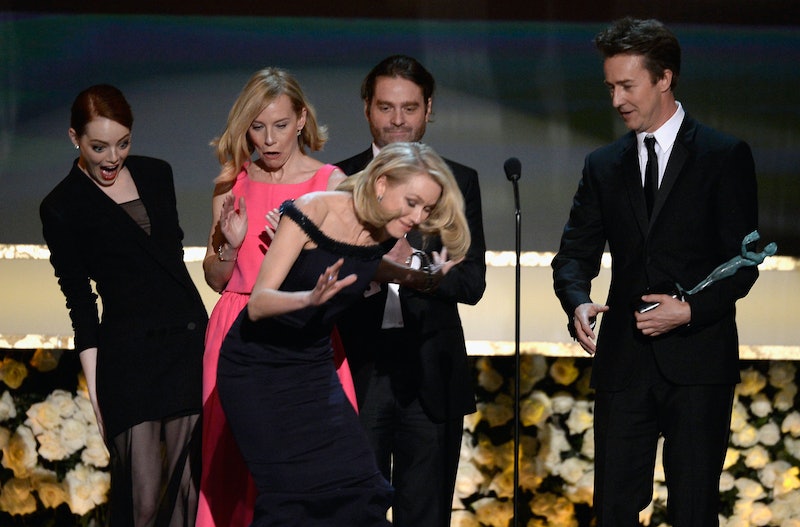 If you're growing tired of the words "awards season," I have some good news: the final event in the time period, the Oscars, is just a little over a week away. On Sunday, Feb. 22, the top movies of 2014 (well, at least according to the Academy) will compete for the biggest awards in the industry, in a three-plus hour ceremony that'll undoubtedly be filled with glamour, great speeches, and plenty of GIF-able moments that'll be circling around Twitter practically two minutes after they've aired.

And if the 2015 Oscars are anything like the shows of years past, they'll also contain their fair share of predictable occurrences. Sure, the Best Picture race is heating up, and no one knows exactly what host Neil Patrick Harris has up his sleeve, but otherwise, the Oscars are likely going to be a fairly unsurprising night. I'm not just talking about the winners of each category, although you'd be smart to put money on Julianne Moore. I'm talking about everything else that typically occurs during a long, drinks-filled ceremony, from crazy speeches to red carpet pratfalls. Below, my predictions for which movies and celebrities are going to fill this year's Oscar superlatives:

Most Likely to Bore You to Pieces With Their Speech

I love you, Patricia Arquette, but I just can't hear about how much you adore your fake family/how great Richard Linklater is/how Boyhood was an amazing experience another time.

Most Likely to Make You Cry With Their Speech

Lupita Nyong'o. Hey, I never said it had to be an acceptance speech. While presenting, Nyong'o will slip in a few words about her amazing few years and the sad lack of diversity at the awards, and before we know it, we'll all be in tears.

Most Likely to Trip

Lady Gaga. Either because of what she's wearing or because perennial date Tony Bennett is slowing her down.

Most Likely to Trip Someone Else

This one's all Emma Stone. We've seen what she's capable of.

Most Likely to Be Very, Very Nervous

Most Likely to Have a Little Too Much to Drink

Expect presenters Jennifer Aniston and David Oyelowo to bond at the bar over how unfair it is that they were snubbed for awards but still had to present at the Oscars.

Most Likely to Have a Lot Too Much to Drink

Shirley MacLaine. I just feel it.

Most Likely to Shout-Out to Harvey Weinstein

You might expect this one to be Benedict Cumbatch or Keira Knightley, since they're both nominated for a Weinstein-produced movie, but my money's on Bradley Cooper. He owes Weinstein for boosting his career with Silver Linings Playbook, and the producer's probably never let him forget that.

Most Likely to Have a Tough Time Making Friends, Part 1

I know Rosamund Pike isn't really Amazing Amy, but she just gives off a vibe, you know?

Most Likely to Have a Tough Time Making Friends, Part 2

Sorry, J.K. Simmons, but it's your own damn fault.

Most Likely to Call Out the Oscars' Lack of Diversity

Give this one to host Neil Patrick Harris. If he did it at the nominees' lunch, he'll do it at the show.

It's okay, Sienna Miller, we're not sure what you're doing there, either.

Most Likely to Show Off Their "Surprise Face"

"I don't know what you're talking about," says Eddie Redmayne, while intensely studying clips of Taylor Swift accepting awards on Youtube.

Most Likely to Become Our New Favorite Dream Couple

Last year, it was Emma Watson and Joseph Gordon-Levitt. This year, it's going to be Anna Kendrick and Miles Teller. It just works.

Most Likely to Call Out Sexism on the Red Carpet

Cate Blanchett is bound to lead this crusade, but expect Jessica Chastain and Julianne Moore to provide anti-manicam backup.

Most Likely to Not Have Time for Anyone's Crap

Most Likely to Crash The Musical Performances

Hans Zimmer. He just had so much fun at the Grammys!

Most Likely to Be Hanging At Home, Thrilled They Aren't There

"Look at all those poor people!" says Jennifer Lawrence, drinking a beer and laughing at her TV screen.

Most Likely to Be Wishing They Were Hanging At Home, Thrilled They Aren't There

Matthew McConaughey is tired of this. He just wants to go surfing shirtless without "ruining the McConaissance." Is that really too much to ask?

Most Likely to Have the Best Time of Anyone

Andy Samberg is performing at the Oscars a song he made called "Everything is Awesome" for a movie about Legos, while also getting to rub shoulders with Hollywood elite and take a bunch of selfies. He's going to have a good night.

Most Likely to Embarrass Themselves In Front of a Legend

"I'm a big fan of your work," says Adam Levine, "and I assume you're a big fan of mine?" Clint Eastwood responds, "I have no idea who you are. Go away."

More like this
Rita Ora Celebrates Finding Her "Fairytale" Ending With Taika Waititi
By Sophie McEvoy and Catharina Cheung
Everything To Know About Taylor Swift’s 10th Studio Album, 'Midnights'
By Grace Wehniainen and Jake Viswanath
Twitter Is Freaking Out Over Rihanna’s 2023 Super Bowl Halftime Show Announcement
By Stephanie Topacio Long
The Spice Girls Just Dropped A Brand New Music Video
By Sam Ramsden
Get Even More From Bustle — Sign Up For The Newsletter