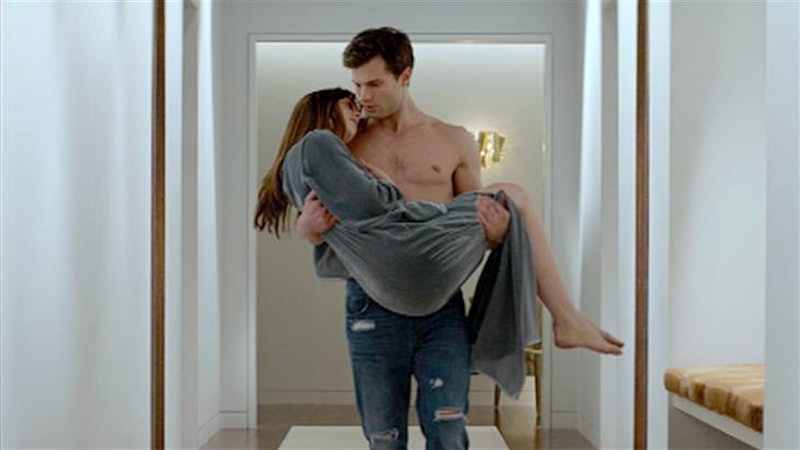 And that is because (major spoilers concerning the very end of the Fifty Shades of Grey movie follow) the film ends perfectly.

I had already come to terms with the fact that I was enjoying Fifty Shades far more than I ever believed I might; I was laughing, engaging, finding charm in the plucky maneuvers of a fish-out-of-water Dakota Johnson. And then came the end of the movie, the last straw in convincing me that what I had just seen was a truly impressive piece of work.

For nearly two hours, the audience had watched Johnson’s Anastasia give herself over to the ostensibly loveable Christian, saying “yes” to his sexual dominance as he hesitated to afford the same affirmation to hers of emotional submission. Throughout, the subtext was clear: this was a movie about the give and take in any relationship (not just the sort that ordained the regular use of riding crops), and all the fear, hesitation, and bouts of withholding inherent thereto.

Finally, the most explosive of any of Anastasia and Christian’s fights took way — an argument that brought the imbalance in their romantic partnership as close to the surface as we’d yet see. Ana lambasted Christian for his unwillingness to concede to emotional intimacy, citing his selfishness, cowardice, and a sadism not restricted to bedroom practice. To cap the conversation, Anastasia stormed out of her beau’s sleek, colorless pad, riding the elevator out of sight, solidifying an end to their relationship.

“So what’s up next?” I thought. Surely we’d find Anastasia back in her old, more comfortable, yet somehow newly unfulfilling lifestyle. Surely Christian would recon with his demons and ultimately succumb to his love for this vexing young woman, swooping in on her with an impassioned display of his willingness to commit.

But… no. None of that. Nothing. The movie was over. Anastasia had walked out on Christian, dismissing what so many other films might treat as a boyish aversion to romantic stability and instead casting it as malignancy, maliciousness, and misogyny. And that’s exactly how the film left it. No redemption for Christian. No forgiveness for his tireless devotion to a toxic way of living. No loving embrace of his manchild charismatic, the likes of which has lined every second or third major romantic comedy since Matthew McConaughey first gained abdominal stardom.

Fifty Shades, a reversal of everything that we’ve come to expect from romantic Hollywood, ended on a deliberate statement: this B.S. will not fly.

You can’t just worm your way into some strange lady’s life, treat her like dirt for months, parade the very idea of your partnership around as if it’s the gift she’s been waiting for all her days, and then erase all acts of emotional terrorism with a swift musical number or Olympic-grade sprint to the airport.

What you can do is work gradually but efficiently toward self-betterment, understanding the good fortune suggested and responsibility entailed by the throes of a meaningful relationship. Christian doesn’t accept this challenge, cementing him among the company of many Hollywood heroes… but, to distinguish Christian from the lot, he is not allowed to get away with this. That final straw breaks the camel’s back, and Anastasia recognizes that he is no longer worth her time.

It’s a special kind of ending — one that rings true, healthy, and in fact empowering. You know that Ana is better off without him, so you’re pleased to see her leave him behind.

…of course, the looming presence of a sequel or two kind of undercuts this empowerment. If we’re to expect Fifty Shades Darker and Fifty Shades Freed to reconfigure matters, ultimately landing the two in each other’s embrace, then our story is tantamount to the lazy, hapless, forgive-and-forget-but-never-actually-solve-anything romantic comedies that have lined the industry for years with false, poisonous messages.

There might not be anything we can do to prevent this destiny. Those are the messages that sell. Fifty Shades, too, is selling. And sequels sell like gangbusters. This trifecta doesn’t bode well for a maintenance of that positive message with which the new film leaves us off. As such, we might not have it to cling to for very long after all.

But if we can just hone in on that empowerment in the meantime, communally agreeing that the end of Fifty Shades is a victory for Anastasia Steele, then at least we’ll get a good and vital year or two out of it!