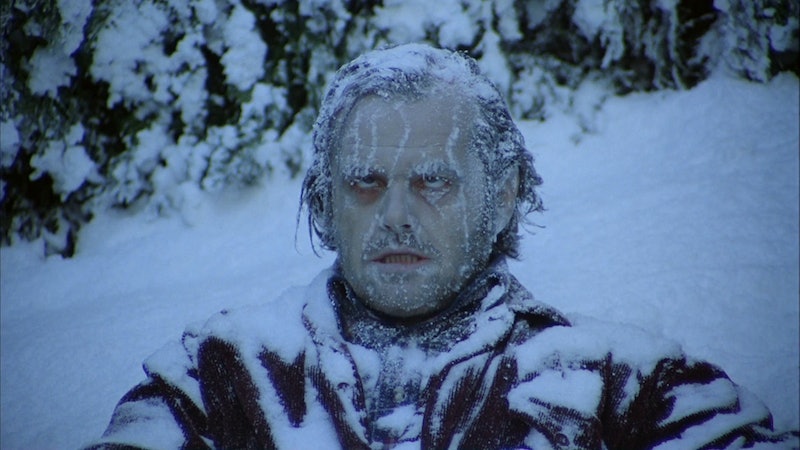 We might be only two months into winter, but it feels like we've been living in this snowy season for so much longer. Freezing cold temperatures, chilling winds, endless piles of snow — going outside in the wintertime is the worst no matter where you live, and all I want to know is when spring will arrive.

Sure, winter starts out great. The first snowfall covers the world in a white blanket and everything looks beautiful. But by the second storm, even the most optimistic person has lost faith in a future filled with sunshine and warmth. Why you ask? Because the negative temperatures, dark days, and snowy streets have the power to take us on an emotional roller coaster ride that changes us forever. Or, at least, until the first flower blooms.

But until that day arrives, we are stuck coping with cold weather and the emotional turmoil that accompanies it. Whether you're currently wading through three feet of snow in Boston or dealing with a light dusting in D.C., we are all probably feeling the same way. And if you aren't, because you're lucky enough to live someplace where the sun hasn't totally abandoned humankind, then consider these emotional stages of winter weather the next time you try telling your winter-plagued friends that the snow isn't that bad.

Admit it. No matter how old you are, you immediately revert to your 5-year-old self when the first flakes fall. As you walk down the slick sidewalks, you stick your tongue out in hopes of catching a flake or two, while your friends peg you with the perfectly sculpted snowball.

A week after the initial snowfall, you look out your window and discover that the streets are still covered in what some would describe as a white blanket. Though the scene is giving you plenty of Instagram material, you start to worry that the sun has lost its ability to turn a snow pile into a puddle.

What was once a winter wonderland is now a frozen hell. The snowy streets have turned into an ice skating rink that leaves your knees bruised and bloody. The pipes in your apartment have frozen, which means you can't escape the cold with a hot shower. And you don't know why, but you suddenly have the urge to punch every snowman you see.

The cold has made you a master of magnification. When painting a picture to your out-of-state friends, you mention snowbanks that measure six feet tall, temperatures so cold they could technically kill a person, and wind speeds that can only be found in the tundra. Deep down they know things aren't that bad, but they don't dare question you.

For a while, you thought that temperatures might rise. But then that damn groundhog saw his shadow and sent the world into another six weeks of torture. With no end in sight, you wonder if spring will ever arrive. Just to be safe, you start shopping around for snow blowers and space heaters.

You're not normally a religious person, but you decide to turn to the higher powers that be to help you out of this never-ending snowstorm. As an act of desperation, you promise to become a nun if the gods provide the world with a little warmth.

Knowing that your town is doomed to an eternity of winter weather, you wonder what it'd be like to be somewhere warm. Your mind transports you to a land of sand, sea, and all you can drink margaritas, and you decide to book yourself a tropical vacation. Unfortunately, that plan quickly comes to an end when you realize your bank balance is lower than the temperature.

Seasonal Affective Disorder has set in and life, in your opinion, is officially over. Activities that once brought you joy are now a nuisance. Your once cheery complexion has been replaced with resting bitch face. The only warmth in your life comes from the layers you begrudgingly put on in the morning.

You realize you can't change the weather (heaven knows you've tried), but you can change your attitude about it. Sure it may be dark and dreary now, but you decide to look on the bright side and hold out hope for warmer days in the future. You walk out the door while the storm rages on because, to paraphrase an icy princess, the cold doesn't bother you anyway.