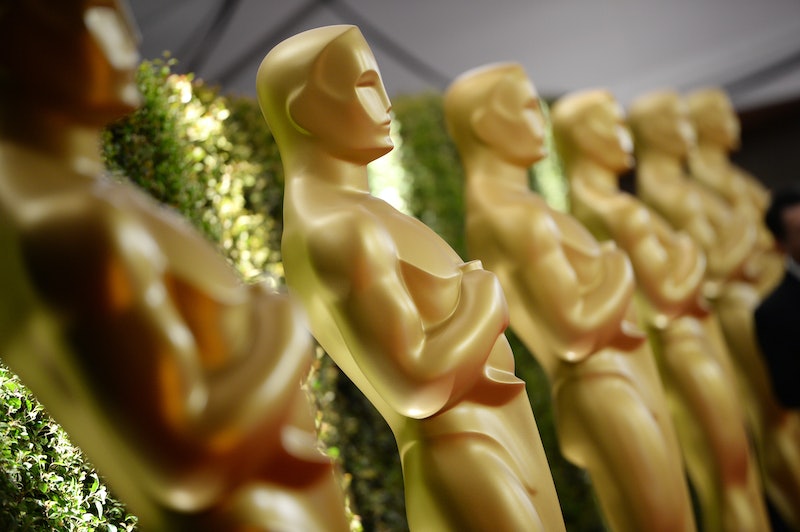 The 2015 Oscars are almost upon us, and I am counting down the days with excitement and trepidation. On the one hand, it's the Oscars. The crème de la crème of award ceremonies. The be-all end-all of filmmaking (and acting) achievements. That little gold statue that they keep refusing to give to Leonardo DiCaprio. (I believe your time is coming, Leo! I believe.) On the other hand, the 2015 Oscars are infamously lacking in diversity, the first time this has happened since 1998. And, as a woman of color, this pains me on a very deep level because of what it says about American society at this time. That, in 2015, it's still acceptable for this kind of oversight to touch an award show as prestigious as the Oscars.

You see, the Oscars has been a ceremony that inspires great excitement in the people for many generations. The ceremony was first hosted in 1929, and first televised in 1953, and Sunday's ceremony will be the 87th Academy Awards. Despite taking place in the most progressive time in its history, why does it feel like the most reductive ceremony in recent memory? But maybe I'm just being overly judgmental. After all, I am approaching the Oscars from a pretty unique point of view. How would that point of view change if I had been born decades before, or decades after, I actually was?

I could have just pondered this question alone, as I do most of my random thoughts. But I do have a mother, 49 years old, and a sister, 12 years old. What does the Oscars mean to them? The answers I received were... interesting.

My mother doesn't remember when she first learned about the Oscars. She was born in Jamaica in 1965, and, growing up, the Oscars weren't a ceremony that were really on her radar. In her day, they only had one television station: JBC, Jamaica Broadcasting Corporation. When asked about award shows, the only thing that she can call to mind from her youth are the Miss Jamaica pageants that she watched religiously as a teenager and young adult. Her entire face lights up as she recalls those hours she spent parked in front of the television, trying to see which young Jamaican woman was going to pass all the tests to be considered worthy to represent the country at the Miss World pageant. The year she was born, it was Carol Joan McFarlane.

But the Oscars. The Oscars were a ceremony that held no meaning to her. When she came to America, it was after I was born and it was to work as a nurse until she could make enough money to bring my father and I over with her. This is the story of most, if not all, immigrant families. At first, when she arrived, she stayed with a roommate in a similar situation (one she is not still in contact with) before we moved into our first house, our second, our eventual third. A television with more than basic cable was a luxury, the Oscars a boring waste of time. It certainly doesn't inspire the same light in her eyes as the Miss Jamaica pageant did, a ceremony she still remembers fondly at 49. In fact, she's never watched the Oscars broadcast.

"It's just not really my thing," she says with a shrug when pressed about why. To me, the difference seems clear. Miss Jamaica was a personal experience for her. Women from all over her country were competing to be the one woman chosen to represent that same country in a worldwide pageant. If they won there, Miss Jamaica could become the next Miss Universe. That was an accomplishment that she could be proud of, as a Jamaican and as a woman — to see international attention reflecting positively back on her home country. By contrast, that same sense of pride is not reflected in the Oscars, especially not this year. My mother has always been more Jamaican than she is American.

What effect do the Oscars have on her life? What relevance do they hold? For my mother, the answer is none. The Oscars might be prestigious, but they are no Miss Jamaica.

"I know [the Oscars are] an awards ceremony for actresses and actors. Like, just basics," my 12 year old sister begins when asked if she knows what the ceremony in question even is. "I know some of the people who were there. Like Kendrick [Lamar] was there, Pharrell was there..." If you're confused, that is because she has mixed the 2015 Oscars up with the 2015 Grammys — which, incidentally, she also didn't watch. "It's just not my thing. I just watch a TV show; I don't really follow their lives after that... Your life on TV shows, that's my thing, that's my life, but, afterwards, I don't care. I'm glad you did that, but whatever."

And that, really, is just a perfect summary of the generational apathy that plagues the millennials. My sister was born in a world where the Internet was a thing, where everything was at her fingertips, where she could watch TV and be online and play a video game and listen to music, all at the same time. She has over seven different game consoles, a Facebook account, and a Twitter account. Her DVR is constantly full of movies and TV shows she "just can't miss," but that she's completely willing to watch "later." Her interest in the characters as actual people stops when the show ends. Why would she care? She doesn't even know their names.

Unsurprisingly, there is one awards show that she cares about — Nickelodeon's Kids' Choice Awards. And why? Because things happen there. Actors and actresses she actually knows are there. People get slimed. Of course, even her interest in that award show has waned, as the show was more relevant to her life when she was 5 years old, but she would still much rather tune in to the KCAs than the Oscars. The showmanship of the Oscars has long since faded (though with Neil Patrick Harris as a host, we might see a return to some of that), so it just doesn't have the kind of excitement and chutzpah that a 12 year old has come to expect from the KCAs. It's, well, boring.

So what do the Oscars mean for this millennial? Two hours, during which she could be doing five other things simultaneously, starring people too old for her to have bothered to learn their names just yet.

I don't remember the moment I first learned about the Oscars. It was one of those things that was just abstractly known without any real context. "Academy Award Winning Actress" and "Academy Award Nominee" were phrases that were blasted from every trailer that was on the television, but they meant absolutely nothing to me growing up. As a child, my television was tuned to one of two stations at all times: Nickelodeon or the Disney Channel. The films that usually went over big at the Oscars were not the kind of films that usually had a trailer that would make it on either channel. I was in high school before I even found out that the Academy Awards and the Oscars were the same thing.

"What are the award shows again?" I remembered asking a friend, because I had an essay due for English and was too lazy to plug the question into Google when I was on a typing roll. "Emmys, Oscars, Golden Globes, Academy Awards..." Silence descended on the lunch table, and I lifted my head from Microsoft Word to find her staring at me and trying very hard not to laugh. "You counted one of those twice," was all she said in explanation, forcing me to retreat to Google to discover that the Oscars were just the layman's term for the Academy Awards. However, learning that bit of trivia had absolutely no effect on my life because I didn't watch award shows. I didn't care about award shows. I didn't understand why people cared about award shows.

As far as I was concerned, there was no good reason to sit through a two to three hour ceremony to tell me something that the Internet would tell me in a more convenient list the very next morning. I had zero interest in fashion or what celebrities were wearing on the red carpet. I liked movies, I liked TV, and I liked looking up interviews from my favorite actors and actresses on YouTube, but award shows like the Oscars were just an unnecessary waste of time that I could spend actually watching the movie. And the Oscars in particular? How boring. It was all glitz and glamour and champagne glasses — stuff I'd have to win the lottery to ever get to see in real life. (Well, maybe not the champagne glasses...)

2015 will be my first time watching the Academy Awards, and it's a particularly bad year for me to be tuning in. The Academy came under fire for their list of nominees, which did not feature a single person of color in the acting categories and which did feature a very blatant snub of Selma director Ava DuVernay. The 2015 Academy Awards will be the whitest Oscars in 17 years, and that is the atmosphere into which I join the ranks of loyal award show viewers for the first time. Me, a Jamaican-American woman who was listed a Resident Alien until I got my citizenship the year before I entered high school. Me, a woman of color who has grown to 24 years of age in a world where people of color can be so wholly excluded as if none of their achievements are valid — and who is still expected to tune in to the ceremony anyway.

So what do the Oscars mean to me? It means we have a long way to go as a society before things like this become truly unacceptable. It means that when it comes to the most prestigious of all award ceremonies, seeing people who look like me get nominated and win the coveted award is not an expectation for me the way it would be to a Caucasian viewer. It means that, if the long running ceremony wants to unite three generations of immigrants in front of the television for the Oscars broadcast every year, they should consider adding more showmanship and, above everything else, more diversity.