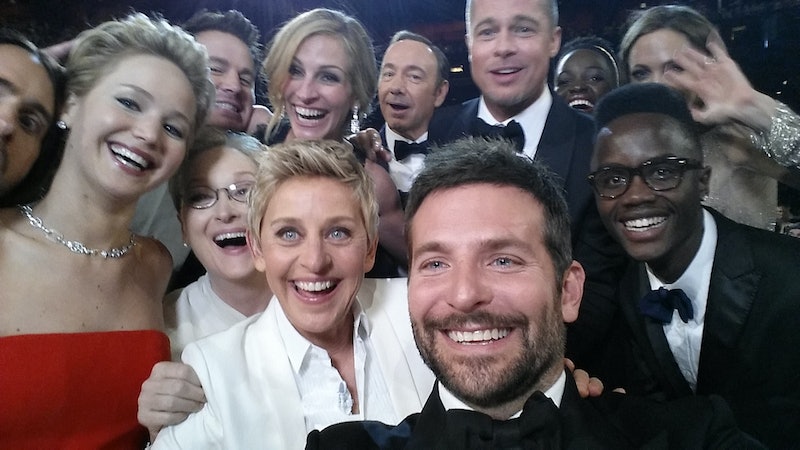 With the Academy Awards just a few short days away, we're all wondering what kind of Instagrams and live tweets the stars will send from the red carpet. I mean, of course I'm kind of more curious about who will actually win, but social media is important, too. Sadly, though, amongst the tweets and Instagrams, the one thing we always miss out with is the most intimate and illusive social media monster: That's right, celebrity Snapchats.

If it's any comfort, they're probably not that great. My assumption is, celebrities do snaps the same way we all do: they attempt to fill other people with FOMO over trivial things, draw weird stuff on their face MS Paint style, and ultimately sound really lame out of context. That is EVERYONE'S (nonsexual) Snapchats, they're all so silly and frivolous. But even still, deep down wouldn't you love a sneak peak into the iPhones of Hollywood's elite?

I'm certainly not Hollywood's elite, but I did take a Photoshop 101 course in college, so I'm pretty sure I can mock up what those Snapchats would look for you. In fact, here's 8 snaps that will probably happen this upcoming Academy Awards, with fierce predictions of what our favorite celebs will probably be doing.

Neil has serious host prowess, and he knows the Oscars will be his magnum opus. Not above making himself look silly (he did three Harold and Kumar movies, after all), he sends a quick snap to Josh Radnor, who will without a doubt be watching the Oscars. You know, at his house. Like the other peasants.

"I wonder what Josh is up to today," Neil wonders in earnest. Probably not much since that mess of a How I Met Your Mother finale. "But the Oscars will make them all forget about that," he thinks. It's all a part of his diabolical plan...

Michael is sincerely upset that there's no black color to draw in his Batman cowl (seriously, there isn't, it's what stagnates my snapsterpieces) but he makes do with what he has. He's pretty confident, he made a film that is both charmingly meta and arty enough to snag that Oscar, so long as Boyhood doesn't usurp the title. Of course this was the year of movies that applied cinematic innovation to otherwise aggressively fine films. Of course. Whatever, if he can still take home the Best Actor Oscar it'll all be worth it.

At 2 am he will drunk text, "SUCK IT, BITCH, I'M BATMAN," to Christian Bale, regardless of whether he wins or not.

Remember how on Valentine's Day Snapchat added a "Me & Bae" filter, everyone posted really sardonic photos of them and their "baes," and I was more than ever proud of our generation? Well, this is all in earnest. What can I say, after that romantic kiss on Saturday Night Live , Bradley and Betty have been the new it couple of Hollywood.

What a plot twist! Meryl doesn't even care anymore, you guys. She's been nominated for an award for like, every Academy Awards since the '70s. This time for playing a witch in Into the Woods. Let's be honest, did anyone even see that movie? But whatever, she's proud of her accomplishments and shares her mock thrill with a snap to Hillary Clinton along with a video snap of her rolling her eyes during Neil's opening monologue.

The latter will later get her nominated for an Oscar.

Wes, God bless him, is like the Manic Pixie Dream Boy of directors, so of course he's going to bring BFF Bill as his date. Originally it was going to be a life-sized Gingerbreadwoman, but Bill talked him out of it. That's what friends are for: they keep you from making moves that are less delightfully eccentric and more bordering on crazy Willy Wonka territory. It's a fine line with Wes.

He's grateful, so he made Tilda Swinton take this snap of them, before she flapped her majestic wings and flew across the red carpet. Wes then decorated it with a handful of whimsical stars and darling emojis, albeit not all of the emojis made sense. Like that cake? The cake was a little weird and unprovoked like, maybe it works as a Grand Budapest Hotel reference, but not in the context of this particular night. Oh, Wes, you delightfully eccentric lad.

He send this snap to Tony Revolori, who isn't even at the Academy Awards for some reason. Don't worry, Tony, you're only about six films away from joining the clique.

Reese, like Meryl, has already snatched her Oscar, so she's mostly down to party. For that she's snagged some fellow nominees (including her Wild co-star Laura) for a selfie, and probs drinks later if this season snubs all of them. Actually, if you've seen that video of her, Cara Delevingne and Zooey Deschanel at the Met Ball, you know that the the last part is a real possibility. It'll probably be documented in full.

Reese isn't like a regular mom, she's a cool mom, and she's down with the whole Snapchat thing. Yeah, she had to ask Emma how to take a picture, and yes, she asked four times what that "0 MPH" thing means (don't worry, Reese, I don't know either) but she's all about proving to her daughter Ava that she has this social media thing nailed. It'll be a bonus if these Snaps get to Ryan Phillippe, too, who's baby-sitting the careers, looking solemnly beautiful, wondering where his career went.

It's a good night. John is nominated for "Glory" from Selma. Chrissy isn't making that weird overwhelmed face of hers. They decide to take add a snap to their story, to capitalize on the moment.

It is only later that they realized they've been Cumberbombed. Goddammit.

Everyone's been snapping him this sentiment the WHOLE DAY, like it's the funniest thing in the world, like he even made a movie this year, so he painfully adds this to his feed. He tried calling Amy Adams earlier to see if she wanted to share a carton of Ben & Jerry's, but he only reached her voicemail, and the voicemail he leaves was nothing but shrieks and heaving sobs. He spends the night weeping gently into Kate Winslet's lap, and eventually retires to his bedroom, filled with several blonde models from this month's Victoria's Secret catalog.

The pain is so real.