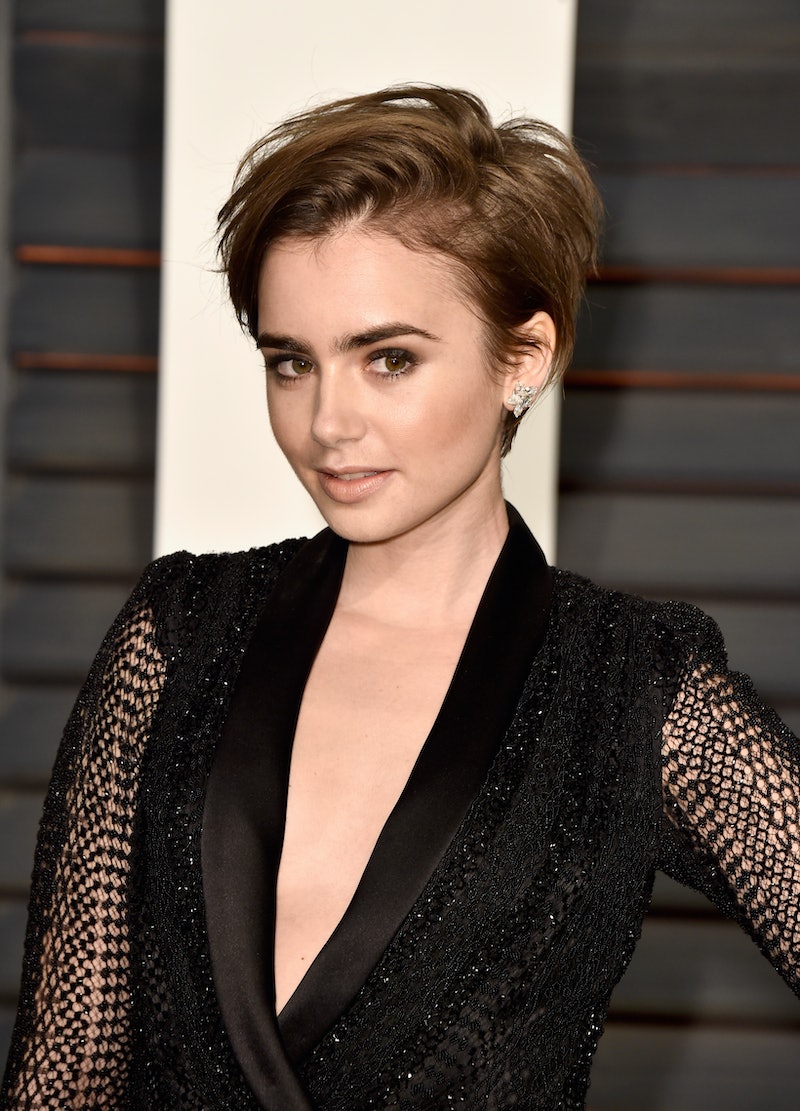 This time of year, I find myself fantasizing about what it would be like to go to a big awards show like the Oscars — specifically, how I'd look on the red carpet. I'm all for trying something different (even though there weren't many Oscars fashion risks to talk about this year,) but when it comes to hair, I think I'd be playing it safe. Nine major celebs debuted new hairdos last night, though, and I think it's seriously bold to make a huge hair change right before the biggest red carpet night of the season. Spoiler alert, though: they all looked amazing.

This is a sensitive topic for me right now: I'm still dealing with the emotional trauma of a horrible cut and color last week, and as much as my new stylist (at a different salon, of course) improved what was a botched-up blond shade and an over-exaggerated version of the already terrible "Rachel" style, I still cannot imagine making a big change to my locks before stepping into an event where I know every angle was going to be photographed and analyzed. Sure, it helps that these ladies' hairstylists are probably wildly talented, but still.

However risky, though, it paid off. Props for the bravery, you guys.

Lily Collins' pixie cut made her look even more sophisticated and stylish than she did before. Let's face it, the girl can rock short hair.

The latest celeb to get a "lob," Margot Robbie worked it with a striking red lip and her signature camera-ready pout.

This was my absolute favorite overall look of the night: the actress' Lisa Bonet-inspired dreadlocks and elegant Vivienne Westwood gown perfectly balanced each other out.

ScarJo debuted a short style with shaved sides last night. As cool girl chic as it is, though, long locks probably would have done a better job of discouraging this awkward John Travolta moment.

Bey is back to the bob just a couple of weeks after sporting long locks at the Grammys, and as always, I love her with short hair (mostly because of the awesome wet look she rocked during her "Drunk in Love" performance in 2014.)

The former lead Pussycat Doll is now a blond, and I have to say, the slicked-back look is making her look way more chic and sophisticated than I'm used to.

OK, I feel a little better about my hair now. Selena has the Rachel, too. Disclaimer: This is from a pre-Oscars bash on Saturday, but it's definitely a notable change. Even though this isn't my favorite cut on her, she still looks amazing. (Side note: Cobalt is definitely her color.)

More like this
How To Master Baby Braids, According To TikTok
By Tomi Otekunrin
Simone Ashley’s Met Gala Look Was Fierce AF
By Tomi Otekunrin
Millie Bobby Brown's Blonde Hair Is Very Britney Spears Circa 2002
By Paris Giles
8 Knockout Beauty Looks From The 2022 Billboard Music Awards
By Audrey Noble
Get Even More From Bustle — Sign Up For The Newsletter