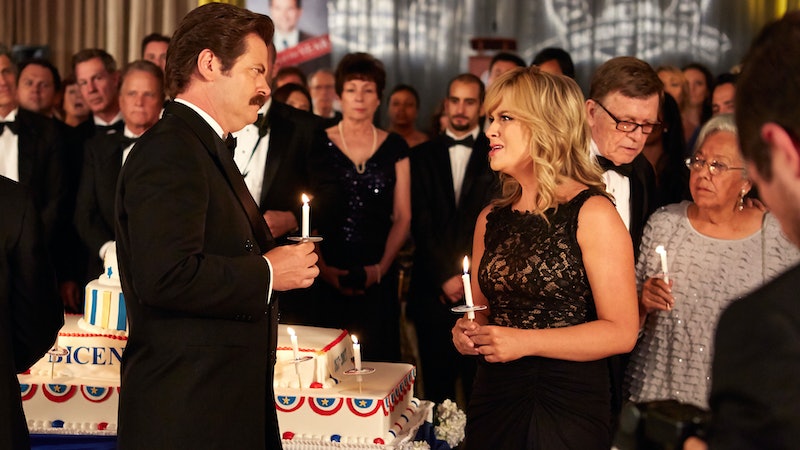 Well, Pawnee-ins, the event we've been dreading for seven years has finally come: the series finale of Parks and Recreation . In a one-hour special starting at 10 PM tonight, we'll be forced to say our final goodbyes to Leslie, Ron, and everyone else we've come to know and love these past seven seasons. Memories will be shared. Tears will be shed. Cries of "this isn't really happening, right?" will be shouted at the television. Prepare yourselves accordingly, Parks fans, because tonight is going to be one rough, painful hour of TV.

There are plenty of things we fans will miss about the series, from the amazing recurring jokes (treat yo self!) to Leslie's friendship with beautiful tropical fish Ann to the fact that Parks, simply, is one of the best comedies TV's ever seen. Through its years-long run, the show never lost its momentum — in fact, its most recent season has actually been one of its strongest, thanks in large part to the fact that the series' timeframe was moved up to 2017. Because as Parks has shown, the world two years from now is rife with potential for jokes and plotlines. Please, Shia LaBeouf, do all of us a favor and start planning for that comeback — we already know it's going to be good. Below, all of Parks' future predictions, from most likely to least likely to occur:

1. Screens are all holographic

2. Companies data-mine your social media to learn everything about you

Gryzzl itself may not exist in 2017, but the idea behind it? Totally, frighteningly plausible.

3. Jaden Smith stars in Hitch 2: Son of a Hitch

Let's face it, this is only a matter of time.

4. Joe Biden has a book called Biden the Rails: A Thousand and One Poems Inspired by My Travels Through Amtrak’s Northeast Corridor

I repeat: this is only a matter of time.

5. The Twin Peaks reboot has been going for several seasons

Not a big surprise, considering how much excitement there was over the reboot announcement.

6. LeBron James went back to Miami

The guy just can't make up his mind.

This is exactly unbelievable enough to seem completely realistic.

Is it weird? Sure. Could the Brad Pitt maki happen? Oh, yes.

The guy's already an actor, director, author, music video star, and performance artist, so becoming a fashion designer shouldn't be a big surprise.

11. Nicki Minaj and Jesse Eisenberg fight at the BAFTAs

She's surprisingly good in some supporting role, he's nominated for some techie drama, he insults her on the red carpet while she's standing nearby — I see it.

I don't know how this would work, but if the technology's there, then this is pretty much inevitable.

13. Verizon, Exxon and Chipotle have merged and made Verxxotle

I'd like to think that we still have a few more decades before the country's down to just eight companies, you know?

14. There's a Pulitzer for listicles

I don't want to live in a world where "15 Interspecies Friendships We Love" has won more prizes than The New York Times.

Sure, Shailene can get on people's nerves, but I just can't see Morgan caring enough to make a thing out of it.

17. The Cubs win the World Series

18. George R.R. Martin has finished the Game of Thrones books

Jack Sparrow marrying Khaleesi is more realistic than this feat being completed in the next two years.