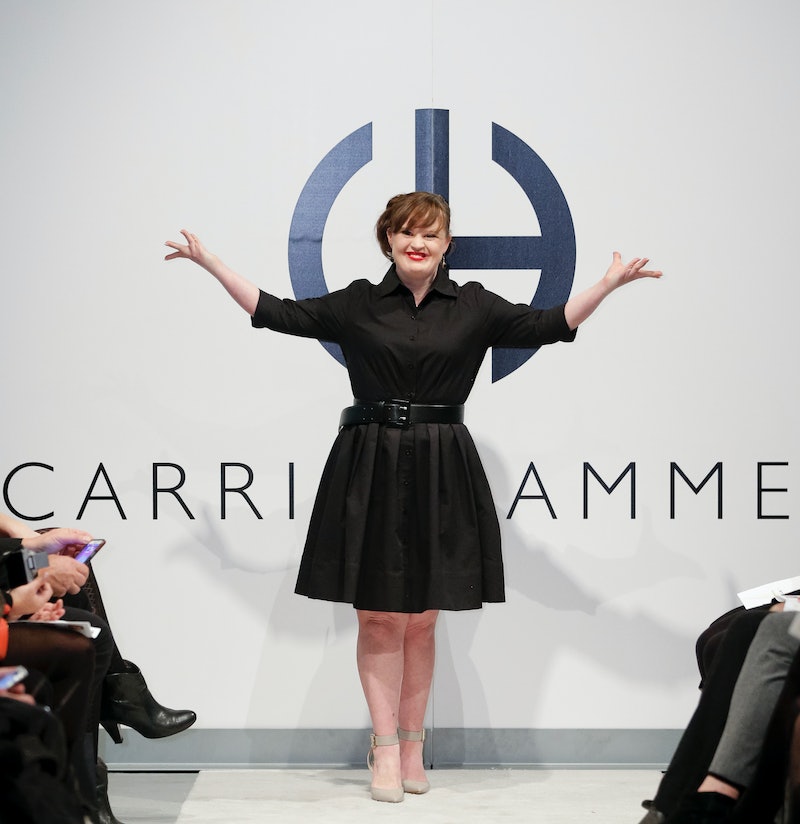 With the close of Paris Fashion Week's last show, it's time to wave your hanky in a tearful goodbye to Fall 2015 fashion month. Believe it or not, it was a pretty good season for progressive and non-culturally-appropriating things happening on the runway. With the exception of a few bumps in the road there (specifically the "bag lady" models at Margiela, Vogue 's Elizabeth von Thurn und Taxis' spectacular Instagram fail; the "Chola Victorian" beauty at Givenchy) the best Fall 2015 fashion month moments were unexpectedly progressive, feminist, and awesome. Way to go, guys! I love it when you do right.

Let's run down just a few of the greatest moments of Paris, London, Milan, and New York really quickly. Dolce's celebration of mothers featured an expectant mom. Vivienne Westwood flipped up the gender script. Jamie Brewer walked in Carrie Hammer's presentation and became the first model with Down syndrome to walk at fashion week. And, of course, who could forget the fashion week debut of the world's most prodigious fictional models, Derek Zoolander and Hansel? They're so hot right now.

Before I gush for another 200 words, let’s get right down to it. From Andreja Pejic’s runway return to Rachel Antonoff’s girl-power garments, here are the six biggest wins of Fall 2015 fashion month.

It's difficult for a pregnant woman to get hired in the entertainment industry as is, let alone fashion. Whether or not it was intentional, Dolce & Gabbana took a stand on that inequity by having a pregnant Bianco Balti walk their runway. Plus, was there a more fitting choice for a show that was an ode to mothers? I think not.

Fashion's resident OG punk is still keeping her fashion guerrilla after 40 years in the rag trade. Westwood bent gender by dressing her male models in 18th Century corseted gowns and her ladies in suits. Simultaneously, she reminded us yet again how much we love her. Nobody else consistently challenges the social conventions of clothing with her work.

Nobody at fashion week assembled an inspirational and girl-crush-filled lineup quite like Carrie Hammer. One of the most unequivocally triumphant moments of an awesome-filled fashion show was when AHS's Jamie Brewer walked the catwalk, and simultaneously became the first model with Down syndrome to walk at New York Fashion Week. SO much love, man.

Andeja Pejic Returns To The Runway

At her science fair-themed show, Antonoff garnered plenty of attention for featuring the female reproductive system on one of her signature cheeky sweaters. She also showed a pullover sporting the phrase "seymour pussy." Moves like this emblematize the signature mix of girl power and wit that make Antonoff's designs so delightful.

Derek & Hansel Shut It Down At Valentino

The fashion and pop culture spheres were brought to their knees when two of the world's most beloved fake male models Derek Zealander and Hansel made their real runway debut at Valentino's Paris show. It was glorious. It was stupendous. It reminded us that the fashion world sometimes has a sense of humor. The only thing that could've made this marginally better was if David Bowie emerged from the crowd to declaring, "It's a walk off!"

In the inimitable words of Fall Out Boy, "thx 4 the mmrs."