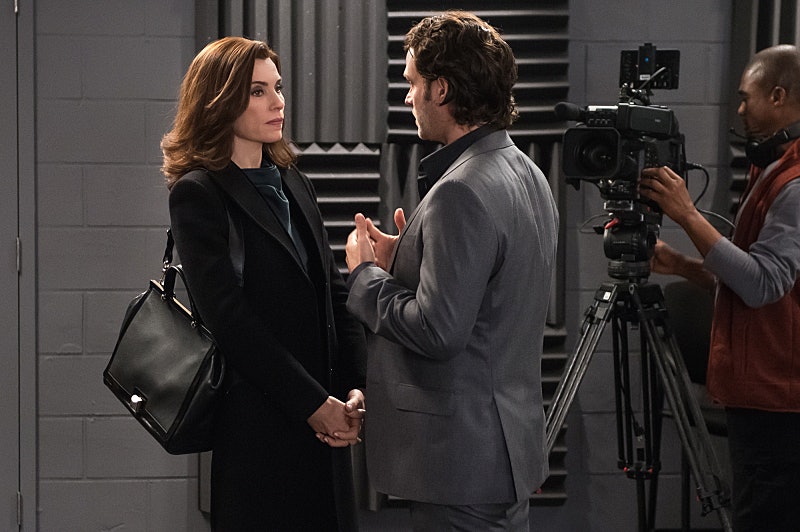 Romance isn't necessarily the first word I think of when I think of The Good Wife — but it seems to be all Alicia can think about these days. Her love life was left reeling after the sudden death of Will Gardner last season, and understandably so. A large part of the CBS legal drama up to that point had been the will-they-won't-they tension between the two partners, and now that even the option of an Alicia/Will pairing is off the table, the writers have been left scrambling to fill the void in Alicia's heart. And unfortunately, they've been pushing Alicia toward her campaign manager, Johnny. This is a mistake.

First they seemed to be setting Alicia up with Finn Polmar, who was in the courtroom with Will when he was shot. He and Alicia bonded over their shared trauma, and seemed to be headed toward some serious canoodling... before the writers seemed to abruptly pull the plug and Finn disappeared for several episodes. Now things seem to be full steam ahead for Alicia and her campaign manager, Johnny Elfman — a pairing that came out of the blue when Alicia kissed him on a whim after hearing the good news of Cary's exoneration.

Two weeks ago, during an episode devoted entirely to Alicia's inner thoughts, we watched her imagine herself in bed with Johnny. And then last week, after some awkward tension between the two coworkers, Alicia finally invited him inside her apartment, leading to a heavy make-out sesh. But why? What are the writers thinking? Where is this relationship going? Are we really supposed to be invested in Alicia's flirtation with her campaign manager?

For all the dramatic build-up this pairing is getting, there doesn't really seem to be much substance to it. Alicia, at least, seems to only be attracted to Johnny on a physical level. And that's fine — she totally deserves to get some. But if that's all it is, then why has so much screen time been devoted to this plot? Why not just have them hook up and get it over with?

Of the two, Johnny appears to be the more invested in the relationship, acting like an awkward schoolboy in Alicia's presence while she maintains a cool, professional exterior. And last week, he sabotaged himself by instructing Alicia to attack Peter, causing Eli to withdraw his endorsement for a new job opportunity he'd set up for Johnny. Why is he sacrificing so much for a client who's clearly more invested in her campaign than in him?

While visiting Louis Canning in the hospital, Alicia admitted to her unconscious frenemy that "I seem to have some bad boy issues." To be fair, Peter, Will, and Johnny aren't exactly hardened criminals, but I suppose in Alicia's uptight legal world, they can be considered "bad boys." So her falling into a relationship with Johnny would just feel like a rehash of every relationship she's already had over the course of the series. Conversely, Finn is definitely a good guy. Sure, he may have prosecuted Cary, but he was just doing his job as ASA and he dropped the charges as soon as he could. At heart, he's a much nicer person than anyone Alicia has ever let into her inner circle.

If Alicia really wants to break out of her pattern, she'll stop her fruitless dalliance with her campaign manager and refocus her attention on the man she has developed an emotional bond with. Alicia is already fire; she doesn't need more fire in her life. What she needs is a nice cool drink of water to balance her out...like one Finn Polmar.

In the words of Regina George: Stop trying to make Elfman happen, Good Wife writers. He's not going to happen. And remember — every minute Alicia spends kissing Johnny is a minute she could have been kissing this face: