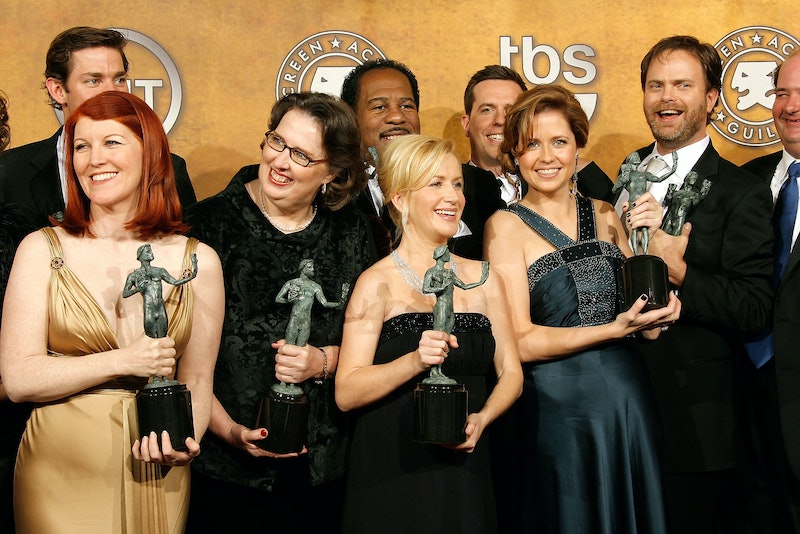 In the age of Netflix and DVD boxed sets, TV shows just don't die like they used to, and that's why it's kind of hard to believe that it's been 10 years since The Office first premiered. I can still remember watching the show for the first time years ago, after weeks of my best friend bugging me to find the episodes online and catch up. Maybe because of my instant crush on Jim Halpert, and maybe because the sense of humor in the writing matched my own, but immediately, I was hooked, and to this day, The Office remains my favorite TV show of all time. Michael Scott's words of wisdom quickly assimilated themselves into my own vocabulary, and the more I learned about the show, the more I loved it. In fact, the history of The Office is packed with trivia that makes the episodes (and those responsible for creating them) that much more fascinating.

Most Office fans already know that many of the cast members are responsible for writing and producing the series, especially Paul Lieberstein, who plays poor, poor Toby Flenderson. And BJ Novak and Mindy Kaling's relationship wasn't just on screen — they're best friends in real life who have dated in the past. These factoids are all pretty much common knowledge, but there's a ton more interesting trivia out there about the show if you know where to look — and if you're a dork like me who has obsessively watched the episodes with commentary on the DVD sets.

Here are some facts about The Office and its cast that you might not have known already. If it gives you a new appreciation for one of the best, smartest comedies of all time? You're welcome.

As soon as he found out he was cast as Jim, Krasinski headed to Scranton with some friends and a video camera to put together those opening shots that now play at the beginning of every episode.

Angela Kinsey used to be married to Paul Lieberstein's brother

In other words, Angela and Toby were basically in-laws. Kinsey and Warren Lieberstein split in 2010, although according to Kinsey, they're still good friends. Together, they have a daughter named Isabel, and if you follow Kinsey on Instagram, you already know she's crazy cute.

Could you imagine a world where Jim Halpert was actually Ben Wyatt? It's too much for me to handle. Also, in the above video, you can see that some other huge names in entertainment auditioned for the show too, including Seth Rogen and Eric Stonestreet.

Originally, Lieberstein imagined that one of Dunder Mifflin's copy machines would break, get refurbished, and end up in Pawnee, Indiana, thus tying both NBC mockumentaries together. Unfortunately, that never came to be, and if it had, that would've been pretty cool.

Ed Helms and Brian Baumgartner went to high school together

They both attended The Westminster School in Atlanta, Georgia.

Oh, yeah, and so did B.J. Novak and John Krasinski

They both graduated from Massachusetts' Newton South High School in 1997... you know, after playing Little League together and afterNovak directed Krasinski in a play their senior year. Clearly, they were meant to work together, right? Novak said:

''I think John started acting as a direct result of my casting him in the senior show. So technically, he has me to thank for all of this, right?"

Jenna Fischer cried when she heard John Krasinski was her Jim

After they read together at the audition, Fischer was convinced that she and Krasinski had to be Jim and Pam, because duh — chemistry. In 2013, Fisher told People:

"When they called me and said I got the role, I said, 'Who's Jim – did you cast John Krasinski?' They said, 'Yes' and I started crying because I knew it would be good. And I mean this honestly – I can't do Pam without him. In the way you need the right partner to have a great marriage, I needed the right costar to have this relationship.”

Remember the 2007 writer's strike? In solidarity with the writers of The Office — many of whom were also his cast mates — Carell called in sick to NBC blaming his "enlarged balls."

The computers in The Office actually had internet

And I'm guessing it made those scenes where various cast members had to sit at their desks and pretend to work without doing much else that much more fun.

Phyllis was originally a casting director on the show

The show's producers liked her so much that they decided to bring her on as a cast member, and before that? She was an NFL cheerleader and a burlesque dancer. Homegirl has lived!

You know Carol, the realtor who sells Michael Scott his condo and they briefly date? She's Nancy Carell, Steve's wife. Is that precious or is that precious?