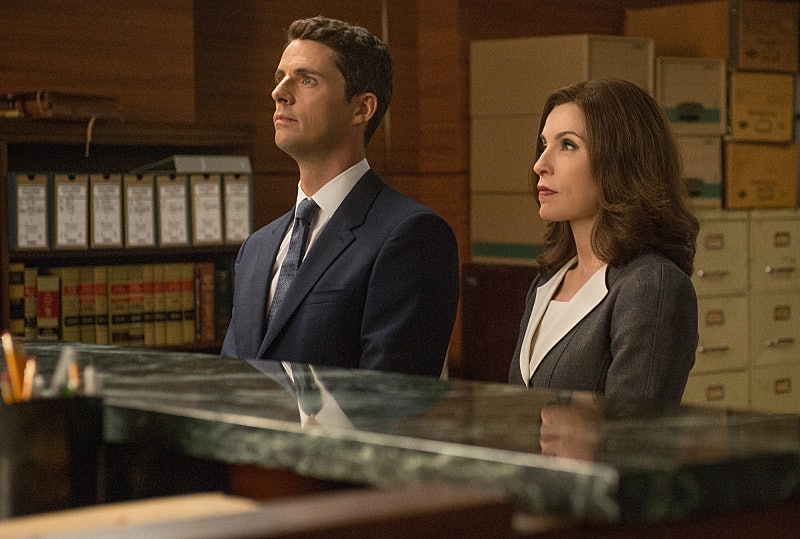 Being a Finn/Alicia shipper is a lot like being stuck on a neverending roller coaster, as The Good Wife's writers constantly tease us with moments of connection between Finn and Alicia... only to let Julianna Margulies say Finn & Alicia are never going to happen the next. We were forced to sit back and watch as Alicia threw away half a season's worth of bonding with the handsome lawyer in order to pursue a left-field hook-up with her campaign manager, Johnny Elfman. And then in last week's episode, "Red Meat," came the crushing news that Finn had finally moved on from Alicia and starting dating another woman.

"But there's still hope!" you likely thought, if you're on Team Finn. Indeed, he offered to cancel his date and seemed genuinely disappointed when Alicia didn't take him up on it. And just when the Finn/Alicia roller coaster seemed on another up-tick... along comes Margulies herself to send us into another depressing tailspin. In an interview with E! News, the Good Wife star crushed our Finn & Alicia hopes and dreams by declaring that, "[Finn]'s so attached in her mind and heart to the Will Gardner character that there really is no way that could've happened." The actress even goes so far as to friendzone her co-star: "Finn becomes more like a friend, the way it probably should have stayed with Will."

I know she's the star of the show and all, but come on — Margulies MUST be wrong about this, you guys. Here are nine (admittedly insane) reasons she could be wrong about Finn/Alicia:

And like that show's executive producer, I. Marlene King, she isn't above straight-up lying to her fans to preserve a good plot twist.

I know — ew, right? But maybe Julianna Margulies is in that one percent of the population that actually wants Alicia and Johnny to get together, so she's just trying to sabotage Finn's chances.

Or maybe Margulies's interviewer was the "Jalicia" shipper in the room and hypnotized her into saying those awful things.

She's Being Bombarded By Angry Tweets

In all honesty, Margulies is probably just trying to appease the very few but very rabid "Jalicia" fans out there who have been sending her hate mail and angry tweets. Just throw 'em a bone, Jules. Smart thinking.

Her Chemistry With Matthew Goode Is Too Hot To Handle

Perhaps she requested the writers put the brakes on her onscreen relationship in order to preserve the integrity of her real-life marriage because, hot damn, her sexual tension with Finn's portrayer was just too steamy.

That Was Her Evil Twin

Or maybe that wasn't Margulies at all, but her eeevil twin whose sole purpose in life is to sow seeds of despair in the hearts of shippers the world over.

He is the master of screwing with fans' expectations, after all.

The Writers Haven't Told Her Yet

Just mayyybeee, the writers have a Finn & Alicia bombshell planned that's SO HUGE, they haven't even told their own star yet. Margulies is just as in the dark as we are, guys!

This Is All A Bad Dream

Then again, maybe I'll wake up any moment and realize this was all just a really, really, really awful nightmare. Then I'll turn on my television this Sunday to watch Finn and Alicia finally give in to their burning desire for each other and grace us with the steamy makeout sesh we've all been longing for.