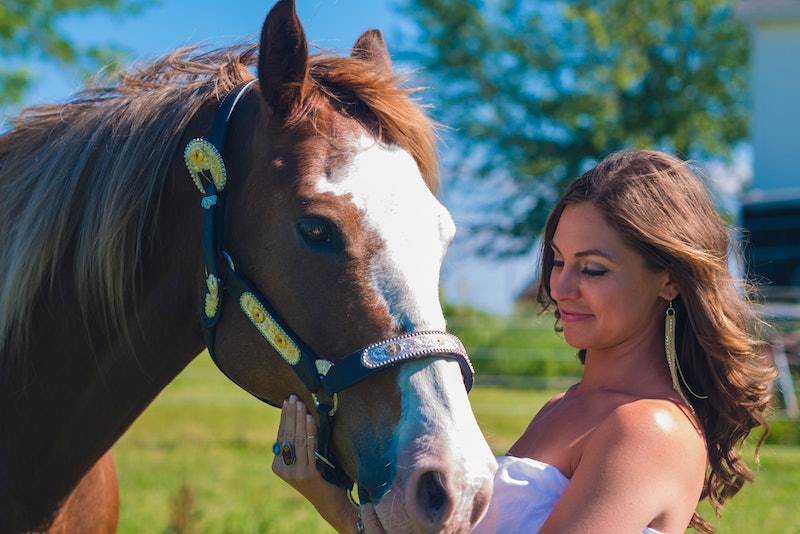 The hullabaloo surrounding the annual Kentucky Derby and its obligatory hat-wearing is bound to bring back your adolescent obsession with all things equine-related. (Unless you're like me and you just carried it straight through to adulthood.) Even if there's zero chance of you becoming a top jockey or rodeo queen at this point, you can indulge your desire to saddle up by reading a horse-themed book. You may be under the impression that horse books are written solely for tweens, but have no fear, my friend, because there are great books about horses for grown-ups on everything from cowgirls to dressage champs. (Plus classics like Black Beauty and National Velvet are fun for horse-lovers of any age.)

Horses are associated with sweeping western vistas, shiny racing silks, and for me at least, a kind of wild freedom. They've been human companions and objects of adoration for thousands of years, so it makes sense that they would also inspire a fair amount of storytelling. Not to mention the fact that some real-life tales of horse racing and rodeoing are as entertaining as any fiction.

Even if your obsession with the Derby is sparked mostly by the incredible headgear and the opportunity to imbibe endless juleps, the horse world is filled with drama, competition, romance, and sabotage — all the necessary elements of a juicy read. Like these 13, for instance.

Smiley won a Pulitzer for her sweeping family saga, A Thousand Acres, and in this novel she puts her considerable talent to work exploring the cutthroat, big money world of high-stakes horse racing in Southern California. If you've ever been curious about how the horses actually get to the Kentucky Derby, you should pick up Smiley's educational, entertaining ode to the sport. The novel is filled with colorful characters, both people and animal, from crooked trainers to an aging equine superstar who refuses to quit. Smiley's horse-crazy world is one you won't want to leave anytime soon.

Lord of Misrule by Jaimy Gordon

Lord of Misrule is an intense read, and sometimes it's downright uncomfortable. The story traces the life of Maggie Koderer as she follows the charismatic, unstable Tommy Hansel deep into the seedy underbelly of the last-chance racetracks. The novel is peppered with insights into the minds of both the human and horse characters, Gordon writes about equines with the knowledge and understanding of a true horse-lover. The world of horse racing is ruled by passion and chance, and the repercussions of this uncertain, precarious way of life echo through every aspect of Gordon's extraordinary novel.

Even Cowgirls Get the Blues by Tom Robbins

I've always loved this book. Maybe it's because I have abnormally long thumbs that bend backward at an odd and extreme angle, but I think it's really because Even Cowgirls Get the Blues is so fun and weird and awesome. Sissy Hanshaw is a celebrity in the world of hitchhiking due to her abnormally large thumbs, and eventually they take her to Rubber Rose Ranch. The cowgirls of Rubber Rose are larger than life and live it to the fullest.

Robbins' novel isn't really just about cowgirls, or even horses, it's about adventure of the sexual, psychological, mental, and physical kind. I like my cowgirls free-spirited, self-reliant, and sassy, and the girls of Rubber Rose Ranch are all that and more.

Horse People: Scenes From the Riding Life by Michael Korda

In my family the phrase "horse people" is used as a descriptor. Like my mom can say her new neighbor has "horse people hair" and my sisters and I know exactly what she means. We don't use it in a negative way; my mom has been "horse people" her whole life. They live in a world that revolves around the equine, and therefore are kind of just a different breed. And I say that with the utmost affection.

I love Korda's book because he clearly knows "horse people" the same way I do. In fact he's one of them, which he's very aware of. He writes knowledgeably about the transformative, consuming attachments people develop with horses and everything they entail. His book explores the ten thousand year history humans and horses share, and each story is deeply personal and intimate. Korda is an excellent writer, if you've never read Another Life: A Memoir of Other People, about his insanely amazing career as an editor at Simon & Schuster, you should definitely pick it up, as well.

Sara Gruen, author of the much beloved Water for Elephants, is also horse people. Riding Lessons was her debut novel, and it's a lovely read, with lots of family drama, horse talk, and of course, romance.

Equestrienne Annemarie Zimmer is getting ready to head to the Olympics when a horrible jumping accident leaves her seriously injured and her beloved horse dead. The novel really begins 20 years later, when a divorced Annemarie returns to her parents riding school with her difficult teenage daughter in tow. The plot may sound a little familiar, but give it a chance. Gruen's nuanced portrayal of the difficult relationships in the Zimmer family, plus her obvious passion for her subject matter, really make the story shine. If you haven't been on a horse since high school, this novel will have you itching to get back in the saddle.

Everett's novel deals with several hot-button issues— race, gender, and hate crime, to name a few. John and his Uncle Gus live in the wide-open expanse of Wyoming, where a Berkeley-educated black horse trainer is rare, to say the least. But John is a well-known and familiar sight, a contented outsider quietly grieving his wife, who died in a riding accident. The peace is shattered when the brutal murder of a young gay man sends the community into chaos. John soon finds that unruly horses are the least of his problems, as he examines his own complicated feelings about homosexuality, and how much he's responsible for what takes place around him.

Although the novel isn't strictly about horses, Everett grew up primarily in the West, and horses figure prominently in the narrative. He deftly weaves together the personal and the political, raising issues and asking tough questions that should be on everyone's mind.

Seabiscuit's story is one of those true-life fairytales that makes better reading than most fictional fables. After being written off by the racing industry, the plucky horse with the crooked legs and sad little tail goes on to become a legit boss on the track, and one of the biggest attractions in all of sports history.

Laura Hillenbrand writes nonfiction with the language and pacing of a novel, and she brings the story of this truly remarkable horse to life with heartfelt detail. The people who shape Seabiscuit's extraordinary career are just as colorful and unexpected as the horse himself. Even if you don't usually read nonfiction, you should really pick this one up. You'll root your heart out for this underdog and his team of unlikely champions. And probably cry at some point. (Yes, the .gif below of Tobey Maguire waving his arm like it's going out of style and looking like he's about to burst into tears is from the movie adaptation.)

The Horse Whisperer by Nicholas Evans

You're probably familiar with The Horse Whisperer because the movie adaptation features a very young, up and coming Scarlett Johansson. I think that Evans' novel is often dismissed as "lad lit" or whatever, but it deals with some pretty heavy stuff, and he writes about it with unexpected insight.

The best part of the novel is the portrayal of the amazing bond that can develop between a horse and its human. Teenager Grace and her beloved horse are involved in a horrifying accident, one that leaves Pilgrim dangerously demented and Grace without a leg. Refusing to give up on either horse or girl, Grace's mother Annie takes them to Tom Booker, a legend who supposedly possesses an ancient gift that allows him to communicate with horses. Whether you believe in horse whispering or not, no true animal-lover can deny the incredibly powerful bond we have with our four-legged soul mates.

With all the money, competition, and rivalry running rampant in the horse racing world, it comes as no surprise that it makes a great setting for crime fiction. Dick Francis was a former jockey, which gives his work a credibility and insider-y feeling that puts it at the front of the pack. Dead Cert is my favorite Francis novel, although they're all entertaining and well-written. The characters are finely drawn, the language is spot-on, and the racing lore is fascinating.

The novel centers on wealthy amateur jockey Alan York, whose friend and fellow jockey, Bill Davidson, dies under suspicious circumstances during a race he was set to win. When Alan discovers that Bill's race was sabotaged and his death intentional, he is determined to discover the truth. What follows is a tightly plotted, fast-paced thriller. Just like a great horse race, it'll have you on the edge of your seat.

This book is amazing for several reasons. First, it's based on the life story of Thomas' grandmother, a real Montana cowgirl. Second, said cowgirl, Nettie Brady, basically tells everyone to shove off when they say she can't be a rodeo star because she's a woman. And, finally, Nettie walks the walk, refusing to let broken bones, influenza, or flash floods stand in her way. Thomas brings the rough, rowdy world of 1920s Montana to vivid life, using her grandmother's stories to enrich this colorful, inspiring book. Seriously, forget the circus, this book is going to have you running off to join the rodeo.

All the Pretty Horses by Cormac McCarthy

McCarthy is an undisputed master of prose, and when his main character, John Grady Cole, talks about horses, you can feel his bone-deep love for the animals. This National Book Award-winning novel is about Cole's struggle to put his life together after losing his family's West Texas ranch. He heads to Mexico searching for wide open land he can roam unimpeded, but instead he finds star-crossed love, bloody conflicts, and a violent, brutal way of life. This is my favorite McCarthy book. It's a little less violent and grim than his others, and I love John Grady Cole. I would ride off into the sunset with him (or Zac Efron) anytime.

The Hearts of Horses by Molly Gloss

Gloss' novel follows the indomitable Martha Lessen, a horse whisperer working her way through the wild west in the early part of the 20th century. Technically Martha "gentles" the horses, but however you want to say it, the girl has a gift for equine communication.

Martha gets a break when she's hired by rancher George Bliss, who's usual group of good ol' boy cowhands are off fighting in the war. Martha soon proves she's more than up for the challenge of long days and hard work, showing a talent with the horses that far surpasses that of any man Bliss has seen. I love the cover of this book, because I feel like the story glows with the same warmth. Martha makes it in a man's world, but more than that, using her gifts and talent she makes herself a home. She doesn't need anybody to ride her off into the sunset, she giddy-ups there on her own.