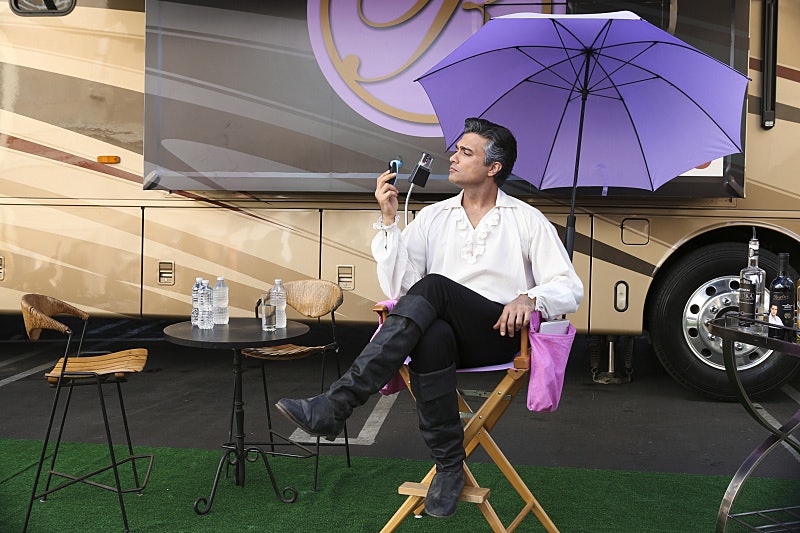 I'm just going to come right out and say it: Jane the Virgin is the perfect show. It has all of the drama and romance that you'd get from a soap opera or telenovela, but an ability to poke fun at some of those elements in a totally loving way. It's really a balancing act when you think about it. Week after week, each episode manages to simultaneously deconstruct, satirize, and pay homage to the telenovelas it was inspired by — which is no easy feat.

There are a lot of ways it does this. The innovative narration is a big factor, as is the larger than life existence of bonafide telenovela star, Rogelio de la Vega (and the set visits to his epic soap, The Passions of Santos), the show's judicious use of fantasy sequences, and then of course, there's the premise. Accidental artificial insemination, billionaire playboys, scheming exes (on a spectrum ranging from sort-of-stalker to Czechoslovakian crime lord), super secret plastic surgery rings, a surprising amount of murders, and Catholicism (oh, and the accompanying concept of virginity) all play an integral role in making Jane the Virgin the delightful soap opera deconstruction/satire/homage it is.

That said, it takes each telenovela/soap opera convention with its own unique spin, which only seeks to make the show even more delightful. So, with that in mind, I've created a little soap opera convention checklist. Let's see what Jane the Virgin has done with each of these elements.

No soap opera would be fully complete without some seriously beautiful people, and Jane the Virgin has got those in spades.

Jane the Virgin played the evil twin storyline perfectly, complete with matching impalements. Think we've seen the last of the Zazo brothers? Only time will tell.

Jane the Virgin has played this convention in pretty much every way imaginable — Petra with her hotelier machinations, Zaz with his murderous machinations, Andie with her Single White Female machinations... but my favorite of all might just be Milos. After all, Milos may have temporarily crippled and permanently scarred Magda, and bought Petra majority shares of a whole hotel, but he's also in anger management, which is amazing (not to mention fitting, given his history of violence).

I don't think Rogelio's what anyone bargained for in the long-lost dad department.

Alba's burgeoning relationship with a Catholic priest? PURE GOLD. Any show can have a hot young priest falling for the first hot young lady coming to confession, but can any of them boast a love affair between the former Miss Puerto Rico 1967 and a stoner comedian legend?

And as long as we're covering forbidden love, there's also the standard...

...Falling for the Stepmother

Pseudo-incestuous relationships in general are a pretty great soap opera trope, but Jane the Virgin has upped their game with a stepmother/stepdaughter love affair. Add the fact in that it's true love, complete with literal fireworks when they kiss, and you've got yourself the best take on this convention in TV history.

Given that part of the show's DNA hinges on the central character being a virgin, there sure is a lot of namby-pamby going on.

Of course, someone had to end up getting taken hostage... and on Jane the Virgin that someone got to eat lobster every night.

Jane was treated to not one, but two over the course of a few months (and if Xiomara doesn't get one before the season finale, color me surprised).

For a show as fun-loving, romantic, and colorful as Jane the Virgin is, it sure has a surprisingly high body count.

Whether she's engaging in a secret torrid affair with her stepdaughter or removing her wig and fleeing the country, Rose is working overtime to both play out and upend all the soap opera conventions.

Pushing Someone Down a Flight of Stairs

Come on, you can't have a soap opera without someone getting pushed down a flight of the stairs, and Jane the Virgin really outdid itself when the pushee was almost deported during her stay in the hospital, while the pusher was previously thought to be paraplegic. That's a lot of plot going on there, with the added bonus of the introduction of the #ImmigrationReform hashtag.

So yes, Jane the Virgin checks all of these boxes, but not with a simple "X." By putting its own unexpected, perfect spin on each of them, this modern telenovela goes completely outside the lines.

More like this
The Prince William & Rose Hanbury Rumours, Explained
By Frances Stewart and Sam Ramsden
The ‘Emily In Paris’ Season 3 Release Date Is Here, Plus The First Footage
By Bustle Staff
The ‘You’ Season 4 First Look Shows Joe’s New Identity And Potential Victims
By Bustle Editors
New ‘Lupin’ Part 3 Teaser Hints That Assane Will “Go Out In Style”
By Brad Witter
Get Even More From Bustle — Sign Up For The Newsletter