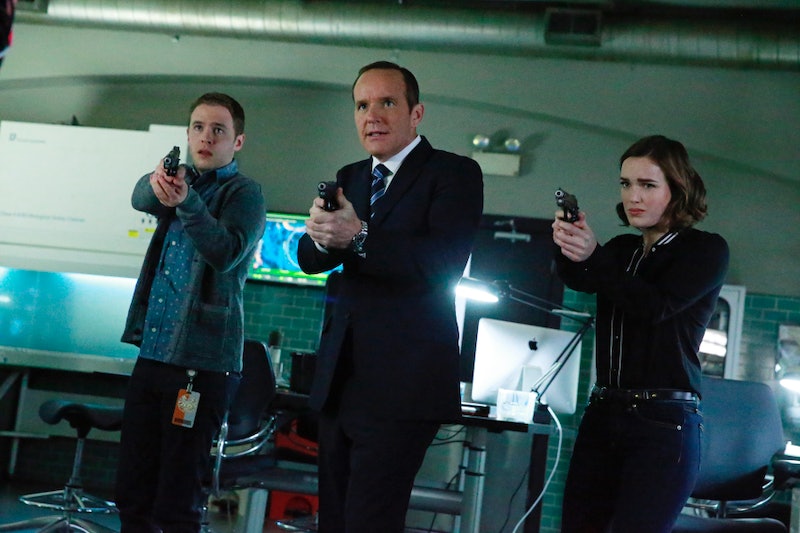 Anyone who chooses to get their fill of Marvel superheroes solely on the big screen is seriously missing out. Disney's small screen spinoff of its über-successful Marvel Cinematic Universe, ABC's Agents Of S.H.I.E.L.D., became must-see TV after the events of Captain America: The Winter Soldier rocked the MCU to its core. When S.H.I.E.L.D. fell to Hydra in that terrific 2014 sequel, it changed the ABC drama down to its very DNA. With no S.H.I.E.L.D. to speak of, how does a show called S.H.I.E.L.D. continue? Thrillingly, is the answer. And now, with this weekend's release of the MCU's biggest movie yet, it's pertinent to wonder: How will Avengers: Age Of Ultron affect Season 2 of S.H.I.E.L.D. ?

The latter half of Season 1 saw Agent Coulson and his team struggle with betrayal and the downfall of the very agency they had pledged their lives to. It was a dynamic shift in the storytelling — one that Ultron can't replicate on the same level simply because nothing else could have such a profound effect on the show. While the Avengers sequel was arguably "bigger" than Winter Soldier, featuring as it did the near-extinction of the entire human race, the events of the more recent film don't appear to carry the same direct ramifications for the characters of S.H.I.E.L.D.

Ultron ended with the titular villain defeated, the world saved, and the Avengers disbanded, as several of the heroes departed for retirement, tropical islands, or outer space. None of this has any bearing on the current struggles of Coulson, Skye, and their fellow agents. Furthermore, there are only two episodes left in S.H.I.E.L.D.'s second season: this Tuesday's "Scars" and next week's two-hour finale, "S.O.S." Winter Soldier came out a month earlier in the year than Ultron, meaning there were still six episodes left of S.H.I.E.L.D.'s first season — plenty of time for the show to deal with the fallout of that film.

The press releases for the remaining hours in the show's sophomore season don't offer any hints of direct connections to Ultron. "Scars" seems to focus heavily on the Inhumans (the title seems to be a reference to Jiaying) and Coulson's mysterious Theta protocol, as the this week's episode description reveals "Skye is torn between her loyalty to S.H.I.E.L.D. and her connection to the Inhumans as tensions rise between the groups -- and Coulson reveals a secret he's been hiding from even those closest to him."

"S.O.S." will undoubtedly feature the climax of the Coulson vs. Gonzalez conflict, as its summary states, "S.H.I.E.L.D. puts everything on the line to survive a war that blurs the line between friend and foe. Coulson and his team will be forced to make shocking sacrifices that will leave their relationships and their world changed forever."

No references to Avengers or Ultron or anything outside of the storylines already set up on the show. But surely the show can't flat out ignore the release of one of the biggest movies of all time? The promo for "Scars" that ran last week doesn't even acknowledged the impending release of Ultron! Well, remember that S.H.I.E.L.D. has already linked itself to the newest Avengers adventure... it just happened before that film's release rather than after.

"The Dirty Half Dozen" featured Coulson's original team of six breaking into a Hydra base, discovering the location of Loki's scepter, and passing that information along to Agent Maria Hill and the Avengers. Those events led directly to Ultron's opening sequence, featuring Iron Man & Co. infiltrating Baron Von Strucker's base in Sokovia and retrieving the scepter.

There is, however, one particular development in Ultron that could have an impact on the future of ABC's show. As the Avengers are battling the psychotic A.I. and his horde of robots in the levitating city, Director Fury shows up with Agent Hill and War Machine in a refurbished Helicarrier, shepherding the city's citizens to safety. This serves the double purpose of announcing to the world that Director Fury is still alive (a fact still hidden from all but a few at the end of Winter Soldier), and signals that S.H.I.E.L.D. is starting to reassemble itself as a functioning organization.

A fully-operational S.H.I.E.L.D. would have just as many ramifications for the show's future as a dismantled S.H.I.E.L.D. had in the show's past. Plus, last week Coulson dropped the "Fury is alive" bomb on Gonzalez and the rest of "real S.H.I.E.L.D." by informing them that they could have Fury's toolbox... until Fury came back for it himself. How will the knowledge that their Director still breathes affect the rivalry between Coulson and Gonzalez's factions? Will next season feature the characters once more working for a functional spy agency? If so, how will that turn of events lead up to the events of Captain America: Civil War , scheduled for release this time next year?

These are all questions that will hopefully be answered in the final two episodes of Season 2... and in the still-unofficial Season 3. (Fingers crossed for a renewal!)