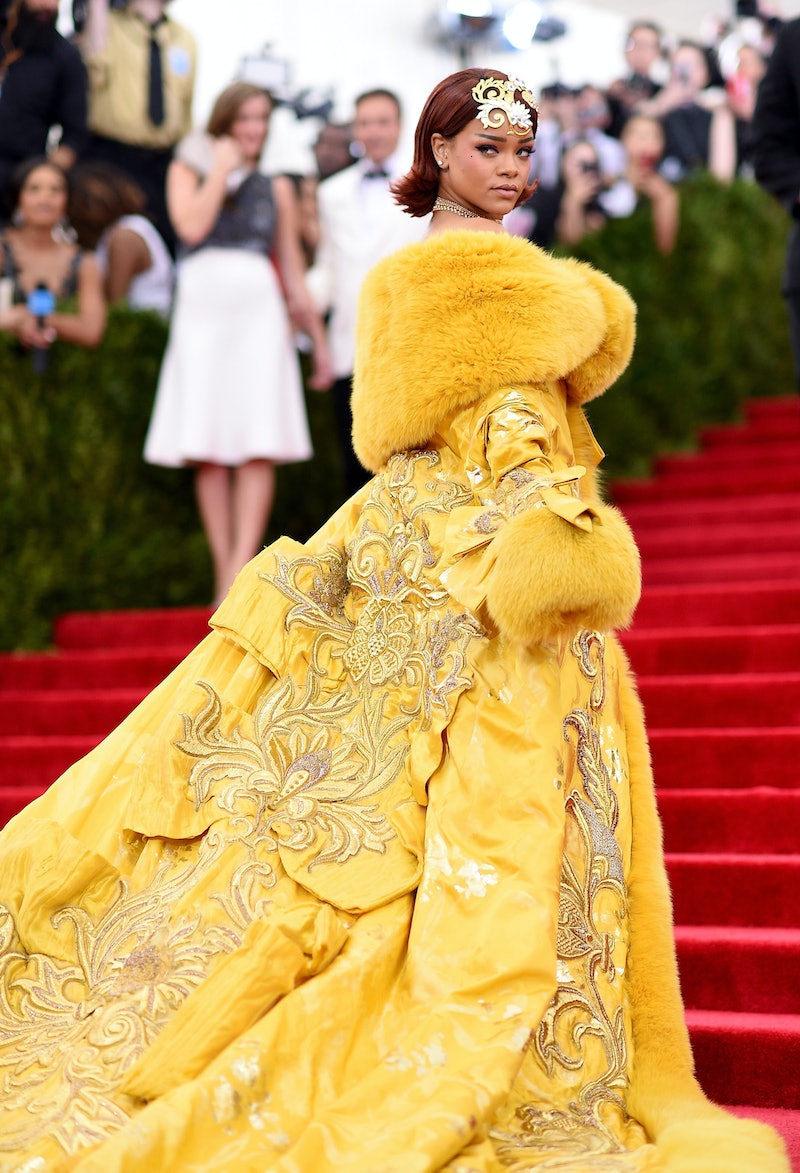 Scores of Hollywood's A-list arrived outside of the Metropolitan Museum of Art on Monday, May 4, for the 2015 Met Gala. Never an event to be disappointing when it comes to fashion, one trend that several female celebrities seemed to take a liking to was capes. Have these ladies been taking a page from the inimitable Rebel Wilson's book? If you recall, Wilson also rocked the cape trend with a magenta-lined cape dress at the 2015 MTV Movie Awards. Apparently the rising temperatures haven't made these celebs want to shed any fabric. One thing is for certain: capes are in.

Interestingly, just as capes have begun making more and more appearances on the red carpet, summer blockbuster season is also upon us, with Avengers: Age of Ultron kicking things off, and annihilating box office records just as swiftly as our favorite superheroes annihilate all those bad guys. With all the impending superhero movies headed to our respective cinemas — and all these lovely ladies rocking some powerfully fetching capes at the Met Gala — I couldn't help but wonder: who would these celebrities' superhero equivalents be?

Were you wondering the same thing too? Even if you weren't, let's take a look at which crime-fighting superhero the caped ladies of the Met Gala would be in an alternate universe.

Anne Hathaway arrived at the Met Gala glowing in a radiant gold gown, complete with a fetching golden hood.

...Would Be Wonder Woman

No, Wonder Woman wasn't the biggest fans of capes per se, but she certainly enjoyed golden accessories. Plus, both her and Hathaway are known for rocking a gorgeous dark coif.

I don't care if it's almost summertime, this gorgeous black cape with white trim should be rocked all day, every day.

Just like Bruce Wayne, Monae is the quintessence of cool.

Holy cape, Batman! No, Batman isn't the superhero we're picking for Rihanna, but WOW! That is quite the cape, if I do say so myself.

Although heavily embellished, Blunt is able to pull off this ensemble, appearing as the epitome of sophistication.

...Would Be Black Widow

Maybe John Kransinski is the Hawkeye to Emily Blunt's Black Widow? Yeah, I went there...

I don't know if this constitutes a full-blown cape, but the drapery offers all the familiar symptoms of a cape, so I'll let it slide. Plus, any excuse to feature Kristen Wiig is fine by me.

Being that the brilliant and hilarious Paul Rudd will be the protagonist in July's Ant-Man, it seems befitting that Wiig would be Ant-Man in an alternate universe.