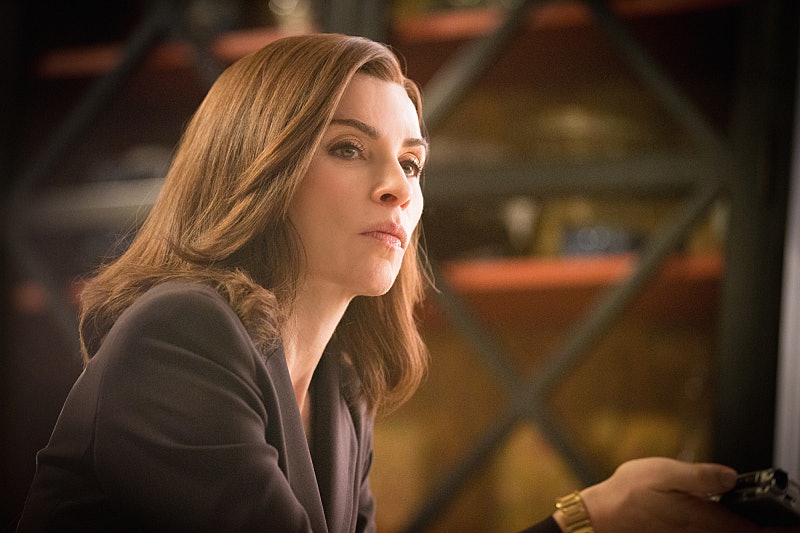 With only one episode left in The Good Wife Season 6, this Sunday's finale, "Wanna Partner?", it's just about time to start looking forward to Season 7. CBS has yet to renew their critically acclaimed legal drama for a seventh year, but it's basically considered a done deal. Despite the show's modest-for-the-network ratings, reliable predictor site TVByTheNumbers has The Good Wife 's chances at 75 percent for renewal; the main cast just signed new two-year contracts; and the writers have even started casting roles for Season 7. If I were a betting man, I'd put my money on a renewal coupled with an official final season announcement. So let's go ahead and knock on some wood and make our first The Good Wife Season 7 predictions!

Season 5 of the show was unanimously deemed one of the best seasons of television in recent memory, with its dramatic, foundation-shaking plot twists (Alicia's starting her own firm! Will's dead!) and Emmy-reel-worthy episodes ("Hitting The Fan," "Dramatics, Your Honor"). However, coming off of that high, Season 6 couldn't help but be a bit of a disappointment... and then it separated the show's ensemble cast with disparate plot lines, wasted time on frustrating romantic subplots, and sequestered Alicia away from her colleagues with a run for State's Attorney that was at times difficult to get behind. Not to mention the fact that the entire year has been overshadowed by the knowledge that fan-favorite character Kalinda Sharma (Archie Panjabi) would be departing at the end of the season.

The Good Wife deserves to go out with a bang; and to do that, Season 7 may just have to go back to the basics. Here are five ways the next (and possibly final?) season could shake out.

Alicia Will Start Her Own Firm With Finn

The most recent episode, "Don't Fail," seemed to make it perfectly clear what Season 7 will look like. Even though she's now out of a job, Finn encouraged Alicia to take on a case of her own. Inspired by her success, she decided to start her own law firm, and Alicia asked Finn to be her partner. A whole season of Alicia and Finn? Yes, please! I can see it now: sharks in the courtroom by day, tigers in the bedroom by night. Julianne Margulies and Matthew Goode have such good chemistry, it's impossible not to get behind this idea.

That being said, do we really think the writers would make everything that obvious? The plot being set up so perfectly in the penultimate episode practically guarantees that it won't happen. Surely the finale will contain some sort of game-changing twist... likely surrounding whoever showed up at Alicia's door in the episode's final moments.

The identity of the person at the door could have a direct impact on the shape next season takes... and if my theory on the visitor is correct, Season 7 could be very exciting. Speculation on the mysterious knocker has ranged from the possible (Kalinda's back!) to the preposterous (Will's alive!). But a quick perusal of the press release for "Wanna Partner?" reveals a very special guest star: Michael J. Fox, who recurs on The Good Wife as conniving lawyer Louis Canning.

If Canning is on Alicia's doorstep, you can bet it's to offer the recently unemployed lawyer a new job. He's offered her a partnership before, despite the fact that the two often spar in court and seem to despise each other. Remember how exciting it was when Alicia and Cary first started facing off against Diane and Will after they left the firm? It was agony seeing our favorite characters on opposite sides of the law, but the dramatic payoff was undeniable. Imagine a whole final season of Alicia and Louis vs. Diane and Cary. The possibilities are endless!

But do we really want our favorite characters battling each other for the show's final season? Wouldn't it be better to spend the final run of episodes delving deep into her relationships with mentor Diane and frenemy Cary? Especially considering how all of those relationships were put on hold this season in favor of the election storyline, having Alicia find her way back to the law firm she helped establish would probably be the most satisfying arc.

I know the show is called The Good Wife and Alicia is its nominal protagonist, but the show has always been an ensemble drama at heart. We've already sent a whole season with Alicia largely separated from the rest of the cast. It's time to bring her back into the fold.

She'll Run For Governor... Against Peter

Not that I'm condoning another election storyline, but anything that pits Alicia against her awful husband gets a pass from me. How exactly would this unlikely turn of events come about? Since there's no such thing as over-analyzing television shows, a conspiracy theory, as reported by Pajiba, has developed over the past couple of episodes that Peter is behind the sabotage of Alicia's State's Attorney campaign. Remember when it appeared that Peter was working against her on election day, saying in an interview that she would definitely win and therefore discouraging potential voters from venturing to the polls? What if his efforts to undermine her didn't stop there — what if he was actually in league with the DNC to stymie her tenure as SA before it even began?

Tellingly, when executive producers Robert and Michelle King were asked directly about this theory by TVLine, they didn't give a straight answer. "There is something in Peter that wants to be the winner. Can we not say anything more than that?" Robert said. If Alicia were to somehow find out that her husband was behind her fall from grace (could that be what was in the note that Kalinda left for her?), she could be compelled to run against him when he seeks reelection.

Then again, maybe Alicia will decide that unemployment suits her, and spend Season 7 completing a series of renovation projects around her apartment. The most recent episode saw the out-of-work lawyer venture to a hardware store in a leather-billed baseball cap, sand a door, fend off telemarketers, and collaborate on a memoir with a ghostwriter, all while counting down the seconds until 5 p.m. so she could crack open a bottle of wine. It was a refreshingly lighthearted look into Alicia's home life in the midst of what's been a strenuous run of episodes. Can you imagine a whole season of Alicia tackling DIY projects with the same zeal she used to bring to her cases? Hilarious.

Oh, who am I kidding? The latest episode already proved that Alicia will never be happy outside of a courtroom for a prolonged period of time. Season 7 will get her back there one way or another... Whether its with Finn, Louis Canning, or her old partners, who can say?