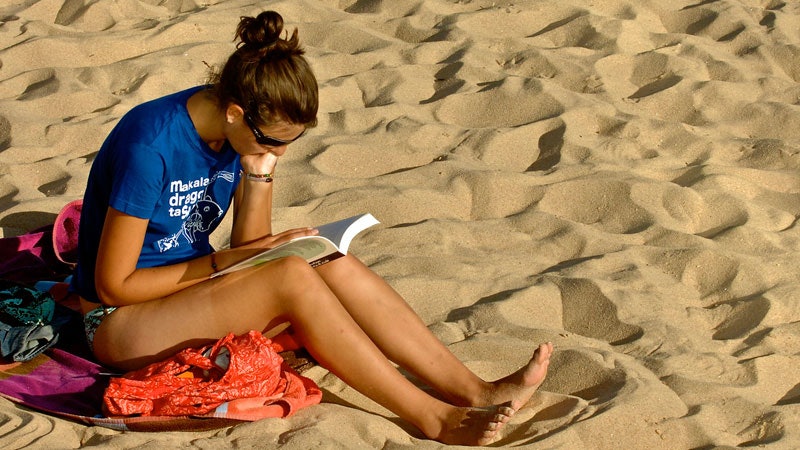 Basically the only thing that's going to keep you indoors during June, the first month of summer, is the fact that you will need to get to the bookstore or library for all the incredible young adult books publishing. (Well that and the air conditioning.) The best YA books of June are going to be hard to narrow down because it's a feast of riches this month, especially right at the beginning. Sara Shepard and Sophie Kinsella, anyone?

Aside from the authors of Pretty Little Liars and Confessions of a Shopaholic (though new books from those two would really be enough), June is the birthday month of some of the biggest YA books of the summer, including a massively buzzed about debut from Adam Silvera, The Truth About Alice 's Jennifer Mathieu's highly anticipated sophomore novel, another fantastic summer story by Twenty Boy Summer's Sarah Ockler, and a wholly original new book by cult favorite fantasy writer Daniel José Older, among so many more I can't even deal.

Luckily summer is the best time for reading.

You can indulge totally in the spirit of the season with books set at summer camp, Brooklyn's sticky summer heat, or in a town named after a mystical mermaid, or you can go the other way and venture into the unknown world of cults and other eerie settings. Essentially your "How I Spent My Summer Vacation" story can't go wrong if you're reading any of these 15 YA books.

Sara Shepard doesn't need my help getting people to read her books; she's done a killer (pun definitely intended) job of pulling in readers herself with the twisty turny, female-friendship-driven Pretty Little Liars series and book one of T he Perfectionists . And The Good Girls , the second and final book of her latest series, delivers. Clever readers should know that you have all the clues to figure out who is killing people exactly according to Mackenzie, Julie, Caitlin, Parker, and Ava's hypothetical scheme, so pay attention.

Carly Vega has stayed under the radar on purpose. She's trying to bring her Mexican parents over the border into the U.S. illegally, so she can't bring any unnecessary attention to herself in the meantime. But when she meets the incredibly persistent former quarterback Arden, she embarks on an adventurous prank spree that risks putting her in the spotlight and putting her parents in danger. Anna Banks tackles a lot here: child abuse, immigration, and first love, but she doesn't gloss over any part of it.

There's nothing quite like a road trip book for summer reading, but if you're embarking on your own cross-country adventure in the summer months, you'll want it to go better than The Devil You Know's Acadia. Acadia, aka Cadie, tags along with two (male) cousins she just met on a spontaneous weekend trip, even after he friend Lindsay backs out and you're basically screaming at her to ditch the plans, too. The fun summer road trip turns screaming summer horror movie as Cadie realizes that vacationing with strangers, even if they're über handsome, does not make the best laid plans but it does make a great summer read.

It's hard to avoid the 19 Kids and Counting's Duggar family right now even if you wanted to. Sexual abuse claims against Josh Duggar have put the somehow-not-yet-cancelled reality TV family in the spotlight for their the abuse, homeschooling teachings, and alleged cover-up of the crimes. But Jennifer Mathieu was looking into the Quiverfull movement (a religious subsection that the Duggars have never outright said they belong to) long before the scandal. Her sophomore YA novel Devoted follows teenage Rachel as she discovers that there's life beyond her strict Quiverfull upbringing where young women are taught to serve, not be educated.

More Happy Than Not by Adam Silvera (June 2; Soho Teen)

Look, I've been thinking over this whole memory-erasing question since Eternal Sunshine of the Spotless Mind, but Adam Silvera manages to twist the idea into something wholly new and heartfelt in More Happy Than Not. (BTW, nay to memory erasing, but maybe Elena and Damon on The Vampire Diaries pushed me over the edge.) In the future, everyone is jumping aboard the Leteo Institute's memory-erasing procedure, and it seems like a dream come true to Aaron Soto growing up in the Bronx projects until he meets Thomas. But the neighbors aren't as accepting of his relationship with Thomas, and Aaron begins to wonder if he can use the procedure to forget who he is and who he loves.

All former summer campers must get their hands on Proof of Forever. Four friends have the best summer of their lives at camp, but years later they have grown distant. That is, until they are transported back to that one magical summer and Joy, Tali, Luce, and Zoe have a chance to revive their dying friendship in the place that started it all. Are you already dying with your own summer memories? Because I totally am, I can't think of a more perfect book to read outside this summer. There's first kisses, bonfires, skinny-dipping and everything you could dream of for a summer reading experience.

At first glance, Emmy Laybourne's Sweet starts in a perfect summer locale: a star-studded cruise ship. The cruise is sponsored by a new sugar substitute Solu that promises users will lose weight and lose it fast. But, um, things don't exactly go as planned. Sure, everyone on the cruise is losing weight, but they're also starting to act a little strange. There are only two people on the whole cruise who haven't taken Solu, and they must band together to escape... in the middle of the ocean. Sweet is both hilarious and horrifying, and it's super important for its portrayal of body image issues, particularly among teenagers.

Like It Never Happened by Emily Adrian (June 2; Dial Books)

D-R-A-M-A is how I'd describe Like It Never Happened, and I'm talking both on stage and off. "The Essential Five" high school theater friends are all part of the production of The Crucible, but there's just as many whispers, secrets, and rumors off stage. A middle school reputation comes back to haunt "Golden Girl" (and not the fun friend of Blanche, Dorothy, Rose, and Sophia) Rebecca Rivers, and a favorite teacher is struck with some serious accusations. But at least no one was literally burned at the stake, right?

Aside from having probably the best summer cover ever, The Summer of Chasing Mermaids will totally capture your summer spirit this June. Elyse d’Abreau had a beautiful voice and was destined for stardom, until an accident stole everything from her, including her voice. For peace of mind, she visits a friend in Atargatis Cove, named after the legendary first mermaid, and begins a relationship with the challenging Christian Kane. One small note: Christian's younger brother believes Elyse is that mermaid come to land without her voice just like Ariel.

It's almost magic the way Cordelia Jensen can pack so much powerful emotion into such sparse verse. Skyscraping is a raw family drama, as Mira discovers not only her father is gay but that he is HIV positive. In free verse, Jensen shows how Mira's self-identity breaks apart and how she tries to put it back together again by re-connecting with her family and spending time with her father in the limited time he has left.

Sophie Kinsella is a publishing monster with her Shopaholic series, and she's sure to maintain that reputation with her first YA novel Finding Audrey. There's so much packed into fewer than 300 pages: a love story, a story about mental illness and recovery, a realistic tale about the aftershocks of bullying, and a hilarious, realistic family drama. After a bullying incident at school, Audrey retreats into her self, hiding behind sunglassesDELICATE MONSTERS and damaging social anxiety. But then she meets her brother's gaming friend Linus, who is patient and kind, and slowly helps her pull herself out of her darkness. The love story is swoon-worthy, but I really grabbed onto the family story (told partly in screenplay for Audrey's documentary) and I challenge you to get past the first family scene on page one without laughing.

For those of you who like your summer reads on the darker side, Delicate Monsters is exactly what you're looking for. The characters are less "golden" and far more monstrous. Sadie Su is kicked out of yet another boarding school for nearly killing her classmate, and she goes back to her California hometown where she finds her childhood best friend Emerson and his kid brother Miles. Miles is in and out of hospitals, seeing troubling visions of the future that always come true, and the story is told flipping back into the past and present as these secrets come to light.

You know those girls: the popular party girl clique of quasi-BFFs. That's Alex, Veronica, and Mollie. But really, no one in the school truly knows the girls and if they're being honest with themselves, they don't really know each other either. However, with Lauren Saft's Those Girls you as readers are certainly going to get to know them. She creates incredible, three-dimensional characters and gets into the brains of the queen bees of high school to tell a hilarious, heartfelt, and realistic story.

The Kevinian cult, or the Community, has been Minnow Bly's home since she was taken there when she was just a child. Readers are introduced to Minnow at the end of her time in the cult, after her hands have been cut off by the Prophet, and during her time in a juvenile detention facility. Through flashbacks, we learn what Minnow did to receive her punishment and how the Community ended up in flames with the Prophet dead. The book is based on Grimm's fairy tale The Handless Maiden, but it's transported into a truly mesmerizing world that makes this YA debut a page-turner in the truest form of the phrase.

Daniel José Older is a cult favorite in YA fantasy, but if I were a betting woman, I'd say that Shadowshaper will thrust him into a far bigger spotlight. Shadowshaper is unique, and I don't say that lightly. It's set in a Brooklyn summer so lushly depicted I swear you'll almost start sweating. Sierra Santiago is a graffiti artist, one of the best the city has, but things start to go strangely when the city's murals start to weep real tears. A magic has magic has imbued the art with ancestral spirits that will force Sierra to tell the story of her own family's past.

More like this
Jessica Simpson On The Time She Was Pursued By A Backstreet Boy & An *NSYNC Member
By The Editors
Netflix Shut Down 'Bridgerton' S3 Rumours About A “Very Dark” Storyline
By Bustle
We’ve Entered The Hot Boy Reader Era
By Samantha Leach
Here's Everyone Who Will Be Competing In 'Survivor' Season 44
By Brad Witter
Get Even More From Bustle — Sign Up For The Newsletter
From hair trends to relationship advice, our daily newsletter has everything you need to sound like a person who’s on TikTok, even if you aren’t.