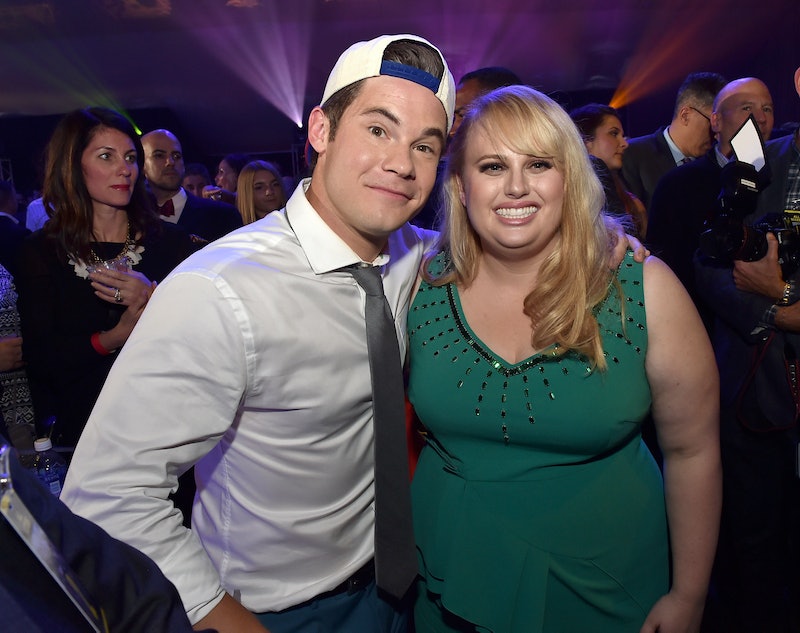 After a long, arduous wait, the Bella Bardens have returned to the big screen with the release of Pitch Perfect 2 on Friday, May 15. If you haven't already seen the highly anticipated Pitch Perfect 2, then I'm going to take it upon myself to issue a standard disclaimer that what you're about to read contains a few spoilers from the aca-awesome film. If you want to dip out right quick and catch the next showing of Pitch Perfect 2 before reading on, then by all means go check it out. Conversely, if you don't mind the spoilers, I can at least rest easy knowing I gave proper warning. Moving right along...

While the first film's romantic arc was focused largely on the too-adorable-for-words relationship between Barden Bella Beca (Anna Kendrick) and Treblemaker Jesse (Skylar Astin), the sequel pays tribute to a spicy — albeit hilarious — coupling between former Treblemaker — and, apparently, former personal assistant to John Mayer — Bumper (Adam DeVine) and Barden Bella Fat Amy (Rebel Wilson). Although Bumper made a couple romantic advances toward Fat Amy in Pitch Perfect ,which included him saying "I feel like we should kiss," we all remember Fat Amy's rebuffs, which included the line: "I sometimes have a feeling I can do crystal meth, but then I think, mmm, better not." Ouch.

In Pitch Perfect 2, we find out that Bumper and Fat Amy have been casually hooking up for who knows how long, but Bumper would like to be exclusive. In a scene that is as funny as it is adorable, Bumper sets up a surprise dinner in a gazebo on the water for Fat Amy, which includes waffles, Kool-Aid squeeze-its (remember those?!) and capers, which he describes as "spicy peas." From there, Bumper asks Fat Amy to be his girlfriend, and waxes poetic about holding hands in public and visiting a Build-A-Bear store where they can both build bears that look like each other. Fat Amy apologetically turns the offer down before making a hasty exit, but later in the film has an epiphany about seeing a future with Bumper. During a retreat with the other Bellas, Fat Amy engages in a reverie about her future, unwittingly stating "I see myself snuggled up to my fiancee, Bumper...I'm in love with Bumper!"

From there, possibly one of the best scenes I've seen ever happens, and Fat Amy serenades Bumper with a rendition of "We Belong" by Pat Benatar. Bear in mind, the majority of her serenade takes place from a canoe she uses to row toward some hilly point on Barden University's campus, making it all the more aca-awesome. Initially Bumper doesn't want to have any of it, but it isn't long that he relents and joins Fat Amy in her serenade before the two horrify coeds with a super PDA make-out session. It is everything.

So, yeah, Bumper and Amy are totally going to get married one day. I'd love to see this played out in Pitch Perfect 3 (which I am currently crossing my fingers and toes over, in hopes that this film will happen ASAP), but until then, let's muse about what a Bumper and Fat Amy wedding would look like, shall we?

The Barden Bellas Would Reunite To Sing At The Wedding

Duh. The Barden Bellas would be vetted to sing at the wedding reception and even possibly sing through their entire treks down the aisle.

Fat Amy Will Pop Out Of Her Own Wedding Cake

Am I the only one who is picturing this? She's quite the showstopper.

John Mayer Will Make An Appearance

Bumper mentioned that he was John Mayer's personal assistant, so why not?

Whether it involves canoes, horse-drawn carriages, or what have you, Bumper and Fat Amy's wedding entrance would be anything but conventional.

A Spontaneous Riff Off Would Break Out

In a surprise twist, jilted Das Sound Machine would return to crash Bumper and Fat Amy's wedding, leading to an epic musical showdown otherwise known as a riff off.

There Will Be Tons Of Awkward PDA

If the brash — albeit, aca-mazingly hysterical — public make-out session between Bumper and Fat Amy in Pitch Perfect 2 was any indication of things to come, I have a feeling that their wedding will leave whoever utters "you may now kiss the bride" eating their words.

You know Fat Amy is going to go all out, and with her portrayer, Rebel Wilson, cementing herself as a fashion icon, there's no doubt the wedding outfits would be epic. I'm visualizing a tearaway wedding skirt to reveal a leotard whilst Fat Amy serenades Bumper with a rendition of Miley Cyrus' "Wrecking Ball."

More like this
Ryan Gosling’s Ken Just Got The Seal Of Approval From His Partner Eva Mendes
By Rachel Mantock
At 28, Emma Thompson Was Already A Star — But Unhappy In Love, Actually
By Olivia-Anne Cleary
Austin Butler & Kaia Gerber Have Had The Ultimate Whirlwind Romance
By Sophie McEvoy
Britney Has Been Granted A Restraining Order Against Her Ex-Husband
By Bustle Staff
Get Even More From Bustle — Sign Up For The Newsletter