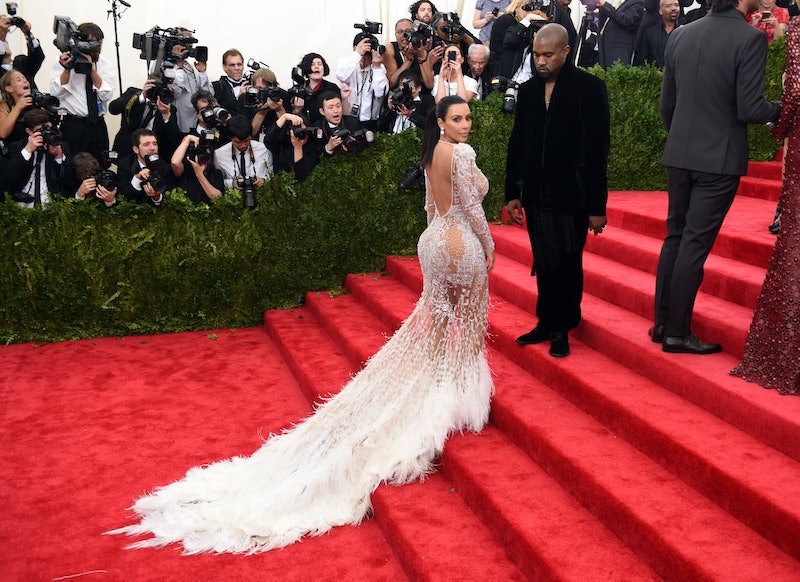 Grace Kelly and the Prince of Monaco. Paul Newman and Joanne Woodward. Kim Kardashian and Kanye West. These are some of the greatest couples of our time. If you can believe it, 365 days have passed since Kim Kardashian and Kanye West got married and broke the Internet with their magical, lavish wedding. They've had a big, big year in the days since — both individually and together. And of course, their third musketeer, North West, who has in her short life become an icon and mastered the shady side-eye for the paparazzi is always in tow. So, to honor their anniversary, I chose to pay homage to their love with the gift of memories, because they are priceless! (And I'm cashpoor, the opposite completely of Kimye.)

Let's relive all the Instagrams, dirty looks from North West, and magazine covers that Kimye have given unto us in the past year, and hope that may they continue to be generous to us all their and our lives long. God bless you, Kimye, and thank you. We don't know what you have in store for us for the second half of 2015 and beyond, but we know you will just keep balling out of control and ascending the peak of greatness. Your hustle don't ever go unnoticed, baby!

Obviously, the most iconic moment of this pair came on May 24, 2014, a date that will go down in history as the day Kimye outdid everyone's wedding flowers for all time. Hey, these flowers got the most likes on ANY Instagram in history! That merits a wedding toast for sure. Cheers to the married couple for always staying on brand.

Who's that staring back at ya from TIME's 100 Most Influential People list? That's right, it's Yeezy. TIME ranked Kanye West at number one. Kim Kardashian was also included on the list as one of this year's Titans.

Kimye has no qualms about spending cash for the luxe life, and why shouldn't they? Aside from amazing swag like ten Burger King franchises, this year they also moved into a crazy new mansion. I bet when North gets older she's gonna throw MAD parties when her parents go out of town.

Remember when Kanye posted a bunch of pictures of Kim from a new photo shoot and said "swish" a whole lot? I mean.... what more can be said, really?

Nori is more well-dressed than I'll ever be, and apparently, she really hates sitting still with a bunch of bored, bougie people at Fashion Week. Even though it was her daddy's show...

I miss this, honestly. It died too soon.

Heading To The Homeland

Kimye does Dallas! I mean, Armenia. This spring, Kim, Kanye, North and some other assorted Kardashians took a trip to Armenia, where they did normal tourist activities like "baptize baby" and "surprise street performance ending in a lake jump." Celebrities: they're just like us.

Can't Compare To The Floral, Though...

To no one's surprise, Kim and Kanye looked amazing at the 2015 Met Gala and did not culturally appropriate at all, which was tough because the theme was literally like, China. As hot as she looked, though, Kim can never top that floral couch she wore the year before.

Kanye got freaky-deaky for his INCREDIBLE performance on Saturday Night Live, wearing those cloudy, spooky wolf contacts. Naturally, Kim wore some, too.

Did they really break it, though? Honestly, almost. I still talk about the politics of this cover. Good job, y'all. Making me use my mind grapes. Plus, several months later, Kanye got his own cover.

Thanks for the memories, Kimye. Please never leave us. You're the heroes we never knew we wanted but that we needed all along. Can't wait to see photos of whatever bonkers celebration you have for your anniversary!