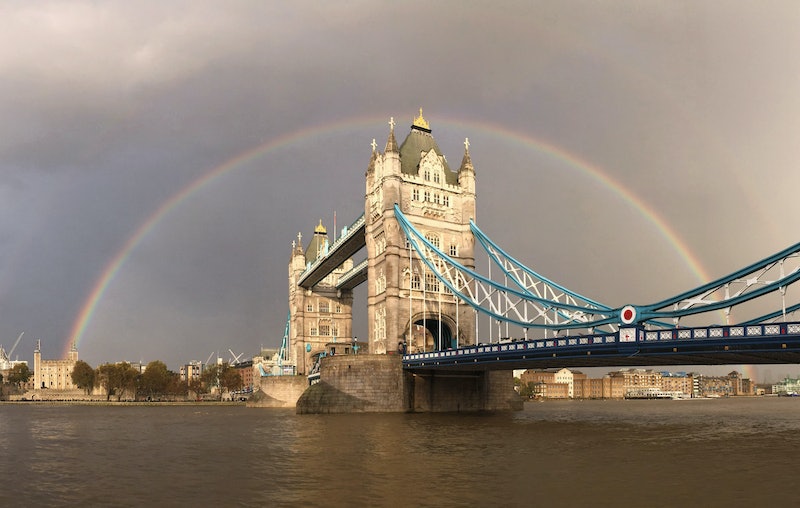 Goodbye Buckingham Palace, hello Bloomsbury! If you love English literature, forget the postcard-ready, tourist-heavy sights: London is filled with other delights to tempt you. If it's your first visit, by all means take in the main attractions, but if you love books, there's way more to the city than the London Eye. And if you're a writer, too, worlds of inspiration lie waiting.

This should come as no surprise; London's links with literature go way back. Over the centuries, writers of all stripes have walked its streets seeking inspiration for their work, and the city remains the a go-to for those who want to make a name in publishing and journalism. It was here that the Brontë sisters found an audience, and sparked wild rumors over their true identity (only when they appeared in person were they able to prove they were, in fact, three women).

Virginia Woolf had a sharp eye when it came to London, and it was her city strolls which inspired my own journeys during my visit last week. Her short story "Street Haunting" captures the duality of the place:

Passing, glimpsing, everything seems accidentally but miraculously sprinkled with beauty, as if the tide of trade which deposits its burden so punctually and prosaically upon the shores of Oxford Street had this night cast up nothing but treasure.

Distracted on her search for a pencil, she perfectly describes the simultaneous hustle and bustle and sense of tranquility that can be felt in one short walk down a busy central London street. With that in mind, when in London... go seek some literary treasure. Here's what I did on my jaunt, and what I'd recommend you, book-lover, not miss for the world.

Soak Up Some Literary History at the British Library

Being a working library, most of it is off-limits to non-members; but if English literature is your thing, what you can see makes it well worth a visit. Treasures include a Beowulf manuscript and Jane Austen's writing desk, and of course the King's Library — a towering column of books that runs through the center of the building. It's a great place to grab a coffee and get some writing done.

Pack a book, a picnic and take a stroll around Bloomsbury's beautiful garden squares. Many of the legendary Bloomsbury group lived in Gordon Square, and Virginia Woolf lived nearby. Tavistock Square Garden features a bust of her — it's where she "made up" To The Lighthouse . Russell Square Garden makes a particularly nice picnic spot.

This small, peaceful churchyard has somewhat macabre literary associations, and is conveniently placed near St. Pancras Station. That's actually why this curious arrangement exists: the headstones were moved to make space for the railway, a project overseen by none other than young Thomas Hardy.

See a Play at Shakespeare's Globe

If you're a fan of the Bard, what greater treat than to see one of his plays performed in as accurate a recreation as can be? Standing tickets can be found for as little as £5, though if three-plus hours on your feet doesn't appeal, you'd better book early to guarantee a good seat.

Step back in time and have a drink in the heart of the city at this 17th century coaching inn. It's the site of a coffee house Charles Dickens frequented, and even featured in Little Dorrit . The building's a piece of history in itself — it's the oldest surviving inn of its design, and it's easy to imagine what it was like in its heyday. Since it's right in the heart of the city it gets pretty busy, but you know the galleries were just made for people-watching.

Plot your own literary pilgrimage

If none of the above takes your fancy, English Heritage marks places associated with well-known figures with round blue plaques. There are loads hidden all over London waiting to be discovered. See who's remembered where and pay a visit to the places that inspired writers you admire — like Sylvia Plath's beloved Primrose Hill.

Pick Up Some Inspiration From an Indie Bookstore

Yes, you can shop anywhere, but if — like me — you enjoy browsing for books almost as much as you like reading them, there are some bookstores you can't miss:

A London literary institution, the impressive five-storey flagship is a must-visit. Despite the clear layout, you will get lost browsing the shelves, stacked with big-name publishers and small presses alike. Expect to spend quite some time here.

Any Amount of Books at 56 Charing Cross Road

The striped awning is so inviting, and the second-hand game is strong. I spotted recently-published fiction in excellent condition at knock-down prices, and that was before reaching the literal bargain basement, which offers books for £1. If you're after a cheap holiday read, this is the place to find it.

The publishing house that gives this beautiful bookstore it name specializes in 20th century literature by women. The immaculate house design makes the books a joy to look at as well as fantastic, rare reads, whether it's a wartime memoir or a history of women novelists. With so many on offer (112 titles at last count), you'll be hard pressed to choose just one to take home.

Fangirl It Up at Your Favo(u)rite Literary Location

Potterheads won't want to miss Platform 9 3/4. Just take a walk by, or if you're so inclined, show your devotion in style: get dressed up and ready to leave for Hogwarts. Props are provided, and attendants take your photo as you "disappear" through the wall. And for Sherlock fans, 221b Baker Street boasts décor exactly as Conan Doyle described in his stories.

Choose Your Tube Stop and Take a Walk

With a Tube pass, the city's your Oyster (presumably why they called the transit pass the "Oyster Card"). Explore the thrift stores, food markets and nightclubs of the hip East End, or if you're an early bird, grab coffee and watch the morning commute unfold in the City. Seek inspiration at a museum or gallery, anywhere from the Tate Modern to the Institute of Sexology. And if you get tired out, there's sure to be a green space nearby to take a break from the buzz of the city, and get your head into a book or some thoughts on paper.

Have you booked your ticket yet?

More like this
Florence Pugh’s London Critics Circle Awards Look Included A 'Puss In Boots' Hat
By El Hunt
25 Inspiring Quotes From Black Women To Celebrate Black History Month
By Kyli Rodriguez-Cayro and JR Thorpe
8 Charities To Donate To During Black History Month
By Alexis Morillo
We’ve Entered The Hot Boy Reader Era
By Samantha Leach
Get Even More From Bustle — Sign Up For The Newsletter
From hair trends to relationship advice, our daily newsletter has everything you need to sound like a person who’s on TikTok, even if you aren’t.