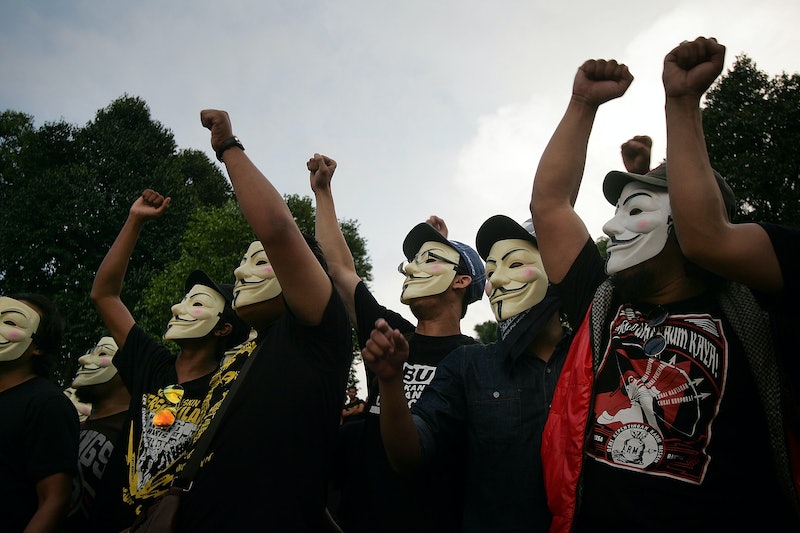 We've all seen the infamous mask, and heard about the mysterious group it represents: Anonymous. But what does Anonymous actually do? The loosely associated group of activists and hacktivists emphasizes its decentralization, as evidenced by the sheer amount of actions it is currently involved itself with. The group has instigated battles to find JusticeForSavannah in Arizona and JusticeForDaisy in Maryville, and now it's even fighting a mysterious Utah boarding school named Logan River. Here's your rundown of what exactly Anonymous has been working on lately:

Anonymous has launched a campaign to shut down “troubled-teen” centers, notably Logan River Academy in Utah, which it alleges regularly abuses its residents/inmates. Logan River is accused of placing teens in protracted solitary confinement and doling out Guantanamo Bay-esque punishments.

One reported punishment involves corralling students into a small room, where an instructor is singing the praises of Mormonism. The students, whose parents paid as much as $8,900 a month to send them to the center, are apparently ordered to sit up straight at their desks for hours on end without speaking to or even looking at one another. Those who disobey — even by, say, allowing their feet to stray outside of the boundaries of the desk at which they’re sitting — are allegedly stripped naked and forced into solitary confinement for as long as a month straight.

Because Logan River is a private facility that restricts residents’ communications with the outside world, reliable reporting about what really goes on inside LRA is difficult to come by. It goes without saying that the facility has denied that it abuses its residents. Two weeks ago, the mental health resource website Psychology Today deleted Logan River’s entry, as did AutismSpeaks.org, after fielding complaints that the center was abusing its residents (they didn’t offer an official reason for removing the entries).

Information on the school’s website about the school's clinical techniques is conspicuously sparse, and while the center’s educational facilities are accredited, its treatment facilities aren’t. Both the U.S. Government Accountability Office and the FTC have specifically condemned this sort of asymmetry at troubled youth centers.

A petition on Change.org to shutter the facility has gathered over 1,000 signatures. Anonymous produced a video detailing the alleged abuses, as did a man named Michael Carter, who claims to have lived in the facility. You can follow the case on Twitter at #ShutLoganRiver.

One of Anonymous’s most successful recent campaigns surrounded Daisy Coleman, a 14-year-old resident of Maryville, Missouri. Last year, Coleman accused a 17-year-old boy of drugging and raping her and a 13-year-old friend at a party. After reporting the incident, Coleman and her family underwent a Kafka-esque ordeal of persecution and ridicule at the hands of the townspeople for making the allegations, and law enforcement ultimately dropped charges against the boys — one of whom is the grandson of a prominent local politician. A local sheriff admitted that while a crime “definitely happened” Coleman was “just going to have to get over it.” As Bustle reported at the time:

The bewildered Coleman family seemed to have an entire town against them, and much of the abuse played out on social media. “‘F— yea. That’s what you get for bein a skank : ),’ read one tweet, one of many expletive-filled comments posted publicly,” according to the Star.

But in October of this year, Anonymous decided to raise awareness of Coleman’s plight. It launched a “Twitterstorm” on October 14th, encouraging Coleman’s supporters to use the hashtag #opMaryville and even providing a long, lengthy list of pre-written tweets for well-intentioned but lazy supporters. The group also organized a rally for Coleman in Maryville, which drew hundreds of protesters to the Maryville courthouse and put an even brighter spotlight on the case. Soon thereafter, authorities reopened the case and assigned special prosecutor.

In October, Anonymous took it upon itself to seek justice for the horrific death of Savannah Cross, an Arizona toddler killed last year. Cross’s mother, Ashley Dattoli Livengood, had left her under the supervision of Ryan Reed and Allison Clement, a couple in their late 20s who ran something of an unauthorized babysitting service (Warning: this is pretty graphic stuff).

Reed admitted to abusing and physically assaulting the two-year-old, and he eventually killed her late last year by stomping on her abdomen and tossing her in a crib. Clement admits to having witnessed all of this, but did nothing to stop Reed. When medical staff examined Cross’s body, they said the bruises were “too many to count,” and found evidence that she’d been sexually assaulted as well.

Reed and Clement were arrested and charged, but even though they admitted to what they’d done, a judge ultimately dismissed the case. Why? Because the Maricopa County Medical Examiner’s Office didn’t provide prosecutors with forensics and autopsy reports by the statutory deadline. The Maricopa County Attorney’s Office blamed it on “significant miscommunication;” the medical examiner’s office blamed it on understaffing and a high caseload.

The manner in which the judge, Warren Granville, dismissed the case allows it to be brought up again, and Phoenix Police Sgt. Trent Crump says that the office is still “prepared to see this case through.” Anonymous determined that this wasn’t enough, and launched Operation Justice4Savannah.

To the media of Maricopa County, the state of Arizona, the United States, and the world, you can not continue to ignore this. This is a child in your community, a child in your city, a child in our country. If you don't stand up for her, then who will? If not now, then when? There is nothing more important than seeking justice for an abused and murdered child. Step up to the plate and bring this horrendous story the attention it deserves.

But the group didn’t just post a manifesto on a blog. They also posted Clement and Reed’s phone numbers, email addresses, and a picture of their home, accompanied by an address and apartment number. The group holds Livengood responsible for her daughter’s death as well — she’d left Savannah in Clement and Reed’s full-time care for five months — and had been planning a protest at Livengood’s place of employment, the Phoenix VA Health Care System. However, the PVAHCS said this week that Livengood doesn’t actually work at the hospital, but had rather been completing a rotation there as part of an “affiliated school program.” Anonymous hasn’t said whether or not they’ll still hold the protest.

Anonymous Is Also Fighting ... Itself

Currently, Anonymous Australia is essentially issuing Anonymous Indonesia a cease-and-desist order, demanding that the Indonesian contingent stop hacking Australian business websites. Like so many things these days, this all leads back to Edward Snowden, who leaked documents showing that the U.S. and Australia mounted a joint surveillance operation against Indonesia at the 2007 U.N. climate conference in Bali. Anonymous Indonesia “retaliated” by hacking the websites of over 170 Australian businesses, including a dry cleaners and a company that makes bouncy castles (!), and posting a message warning the Australian government not to spy on Indonesia.

Suspecting, reasonably, that these small Australian businesses had nothing to do with mounting a surveillance operation on a foreign country, Anonymous Australia told its Indonesian counterpart to lay off hacking business sites and direct its effort towards Australia’s national security agency instead. It released a video last week to that effect, saying that the groups are “all bound together in an effort to bring down our tyrant governments to shape our world as a better place.” After the hacking continued, the group issued a “final warning” Wednesday.

What is clear is that Anonymous certainly isn't going anywhere. Indeed, in our increasingly hacktivist, hashtag-trending culture, the group is likely to only become more relevant.

More like this
Joe Lycett Just Took HIs David Beckham Qatar Protest To A Whole New Level
By Sophie McEvoy
Footballer Jake Daniels Shared His Thoughts On A World Cup Boycott
By Sam Ramsden
Iran Has Issued A Death Sentence Over Mahsa Amini Protests
By Catharina Cheung, Darshita Goyal and Maxine Harrison
Kendall Jenner & Devin Booker’s Relationship Timeline From Start To Finish
By Jordyn Tilchen and Jake Viswanath
Get Even More From Bustle — Sign Up For The Newsletter