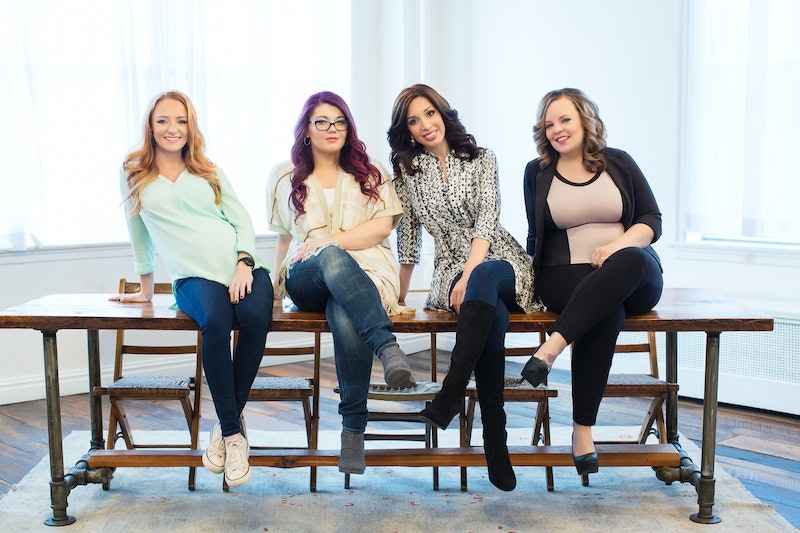 The unthinkable happened on the Teen Mom: OG reunion: Maci Bookout apologized to Farrah Abraham after an entire season's worth of rivalry between the two. After that, no would would want to miss the conclusion to the reunion on June 15, and it even has me wondering — will there be a Teen Mom OG Season 2? (Or, to phrase it a different way, Teen Mom Season 6?) With only silence from MTV on that matter and no social media posts from the cast with cameras in the background, there don't seem to be any plans for another Teen Mom OG season. And right now, MTV is all about Teen Mom 2 Season 5, which is about to premiere. But it seemed as though there'd never be another return to the original girls again until OG premiered, so even if they go on another hiatus, that doesn't mean they won't be back.

But all of the "original girls" turned 16 and Pregnant stars have been busy since the Teen Mom OG season stopped filming. They've all been in the news for one reason or another, and the recent events in their lives would make for another exciting season of finding out exactly how these women are navigating the world of motherhood, now in their mid-twenties.

Catelynn and Tyler, who have now been together for 10 (10!) years, and have a second daughter, are planning their August wedding right now. After watching both members of the couple express some doubts, this wedding would be reality TV gold, and if they want to share it with the MTV audience, I know I'll be watching.

Farrah had an eventful couple of years since her last Teen Mom appearance, but I think appearing on Teen Mom OG helped people remember why Farrah was a compelling reality personality in the first place.

Now that she has a daughter, Jayde, with dreamy new boyfriend Taylor McKinney, it seems like things have turned around for Maci. But if there are future episodes, we'll likely still see her struggle, especially with her ex, Ryan Edwards, who she's continued to have issues with throughout the whole season of Teen Mom OG.

Gary also moved in with his new girlfriend and has a new daughter as well, and their domestic lives also seem incredibly happy. Gary has retained primary custody of Leah, his daughter with Amber, and seems like a stable, steady person. I hope that continues, because now that Gary and Amber are separated, it should pave the way for them to be better co-parents.

Amber got engaged during the Teen Mom OG season to a new boyfriend named Matt Baier and another season of Teen Mom OG would let us see more of their new life together,

Farrah announced her split from boyfriend Simon Saran on Twitter, and it seems like it was an easy decision for her, since she's already joking about it. Seeing a season with a single Farrah would be interesting — how does an infamous reality personality date?

7. All Of Their Kids

The moms' drama might be at the center of Teen Mom OG, but let's not forget that all of their kids are smart, sweet, and on their way to becoming great people. Above all other reasons, MTV should have another season to showcase more of these kids.