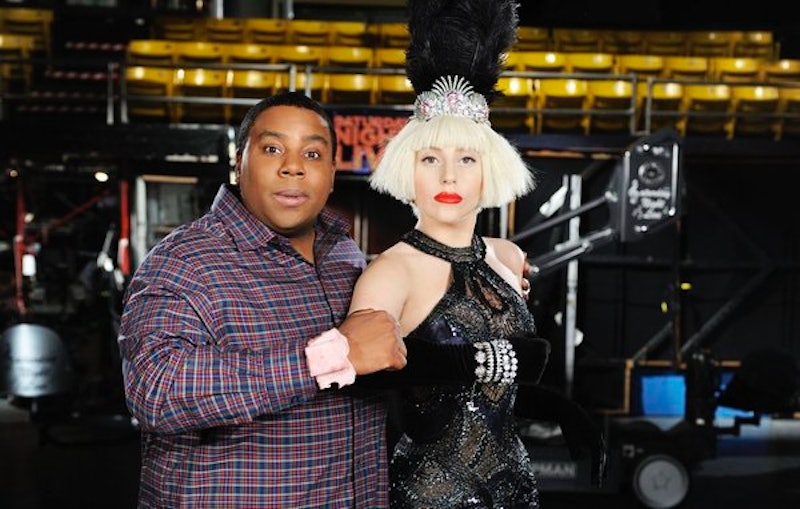 Continuing her heavy promotion for ARTPOP , Lady Gaga played both musical guest and host on Saturday Night Live this week. The show was a smart one, some unexpected moments delivered honest laughs that didn't solely surround the Fame Monster's fame. Apart from some requisite wig changes (there were seven hundred million), the most memorable part of Gaga’s stint on the sketch comedy series was how fearless she was when it came to trashing herself.

Early in the season, Miley Cyrus told us outright she wouldn’t apologize for anything. But Gaga seemed to be doing the opposite. She made two jokes about having a dick. She made fun of her hit single "Born This Way," long thought to be a rip-off of Madonna's "Express Yourself." It seemed as though Saturday Night Live's writers didn’t have to work around a crazy ego this week — there were no too-cool-for-this straight man roles for Gaga. It would be easy to assume Saturday Night Live would have favored sketches starring, say, Jay Pharoah’s as R. Kelly or a malfunctioning multicopter dress, but Saturday Night Live's funniest moments starred Gaga playing characters other than the undeniable character that is Lady Gaga.

A news announcer called Gaga the musical host and guest at the beginning of the show, and while he wasn't wrong — the artist performed two hit songs in sketches, along with her two requisite musical numbers — Gaga proved she can please the audience without having to sing in a huge egg. The added bonus this week? Saturday Night Live gave us a ton of great new stuff with a strong showing for Bayer and Killam. Let's begin:

Consistent with past shows, the cold open hit all the right notes. Props to the show for tackling the two big headlines: Mayor Ron Ford, and 60 Minutes discrediting Benghazi. Taran Killam made the Canadian accent pop interviewing Mayor Ron Ford, and it was a relief to see McKinnon master a role that wasn’t an exploding freak. As 60 Minutes' Lara Logan, McKinnon was completely plastic and composed, buying every word of Ford’s crack head bullshit.

Gaga's monologue had echoes of Marilyn Monroe, complete with adoring men in suits lifting the singer every which way. Interesting move for all the haters who claim, correctly, that the singer's image is too Madonna-derivative. (Hello "Material Girl.") Obviously, Gaga’s monologue was going to reference her New York upbringing, but being a drag queen? That’s daring. She gave us a stunning "New York, New York" line dance. It might have been a little oversold, but she oozed hammy Broadway charm.

This medical parody commercial gave us a hilarious reveal: It's Paxil for the president of the United States. Jay Pharoah, playing the prez, looks wistfully out rain-covered windows. He downs the bottle at the mention of Obamacare. An unusually high-minded commercial parody for the show, which usually sticks to simpler ones.

WATCH: Waking Up With Kimye

Gaga plays a frumpy white girl who works at Apple’s Genius bar. Pharoah, in yet another sketch, nails Kanye’s self-importance and Nasim Pedrad works Kardashian's ornamental ditz thing for all its worth. Unfortunately, the Kardashian family band (11 black-clad people playing no-skill-required instruments) gets minimal screen time — why weren't they utilized for a running gag? But Gaga delivered the second dick joke of the night followed by a knowing stare — pretty brave of the singer to stare this rumor in the face.

This sketch idea, like many of SNL’s great ideas, was born out of an opportunity for the cast to rattle off impressions. This sketch features celebrities who butcher hit songs for a cover album. (Britney Spears does a breathy "Hallelujah," Adele simply grins over LA Law's wordless theme song, scoring big laughs.) And, as mentioned, SNL took the opportunity during this sketch to establish its stance on the whole Madonna-Gaga debacle with the host's “cover” of "Express Yourself."

This sketch centers around the world’s least selective co-op board. Why are they the least selective board? Because they're all emotionally disturbed. There’s Lady Gaga drawing on her Yonkers backstory to deliver a solid My Cousin Vinny impression, a pervy couple, and an even pervier dude. And we haven't even gotten to Kate McKinnon's childless, broccoli-loving woman. A funny sketch idea that, unfortunately, didn't deliver on as many laughs as the writing hoped.

If you’ve ever wanted to see Lady Gaga die playing Sally Field's character in Forrest Gump, then this is your sketch. Spotlightz, the camp where kids overact scenes form famous movies with dark themes, was at the center of this sketch, which featured scenes from Training Day and Breaking Bad. A funny idea that gained momentum.

After such a dazzling opening, Gaga's first musical performance was a bit of a letdown. Even with a cameo from R. Kelly, this managed to be dull — the choreography was nothing life-changing, and I'd rather see Gaga command the stage alone.

We got a steady stream of healthcare Mayor Ford punch lines from Meyers and Strong. Kenan Thompson as Mr. Senior, a man who's outraged that Christmas starts sooner every year, smashes candy canes and tears down decorations, running through the streets with crazy eyes Thompson bears so well.

Taran Killam wins best Weekend Update guest of the season, selling the shit out the snooty Jebediah Atkinson, a 19th century speech critic. His criticisms aren’t political — Jebediah's simply bored with the presidential speeches. Near the end of the bit, Killam breaks character after flubbing a line, but, really that only made him more watchable.

Dejected Blockbuster employees have nowhere to turn — they’ve never upgraded from their high school jobs. After falling into a depression, they discover a Utopian society in the forest where Blockbuster is alive and well. Gaga plays a Twizzler-bearing goddess, and, good for Mike O’Brien — he gets to kiss her. Unfortunately, it’s all a fantasy and he’s really making out with the homeless woman. A really smart way to capture the moment.

Gaga, who is, after all, a musician, croons about the gypsy life on the a pink piano with a voluminous rainbow collar. While the musicians surrounding Gaga might have stolen a bit of her thunder, this performance was more true to Gaga's form — finally, an interesting musical performance, and one that didn't depend on theatrics.

Gaga had impressive high kicks, but that's about all. Skip this underwritten sketch.

It’s the year 2063 on the Upper West Side (Lady Gaga would be 77.) Gaga’s washed up, “Born This Way” is a toilet jingle, and Beyoncé’s an empress. Gaga relentlessly tries to cash in on her old stardom to seduce the super, but she’s a nobody now. She even puts roast beef on her face to jog his memory, but that just makes her look like she tripped in a deli. Of course, Saturday Night Live's audience goes nuts Gaga as an elderly woman showing off previous hits like "Bad Romance," but Kenan Thompson, as the super, thinks she’s having a stroke. There was some pandering in the sketch, but it’s forgivable. Because what star has imagined her irrelevance before? Again for all the haters who call her an attention-whore, she’s scoring major points for bravery.

Saturday Night Live's answer to sports for women? Highlights from the trashiest moments of reality shows clumped together on one channel. Bloodlust for women 24/7 offers the meltdowns without the whole fake narrative. (Screw the back stories and the reunions, no one was ever that invested anyway.) They want to see bitches get slapped. We have to note, SNL, that women do like sports too, but this was a smart idea with real footage. Because the fake truth is more entertaining than fiction.

More like this
Britney Spears Met The Weeknd & Sam Levinson, So She May Actually Be On 'The Idol'
By Jake Viswanath
Selena Gomez Joked About Her Relationship Status In Her ‘SNL’ Monologue
By Grace Wehniainen
Kanye West Rapped About Feeling That His Kids Are “Borrowed” From Kim Kardashian
By Brad Witter
BTS Is Visiting The White House To Discuss Anti-Asian Hate Crimes With President Joe Biden
By Jake Viswanath
Get Even More From Bustle — Sign Up For The Newsletter