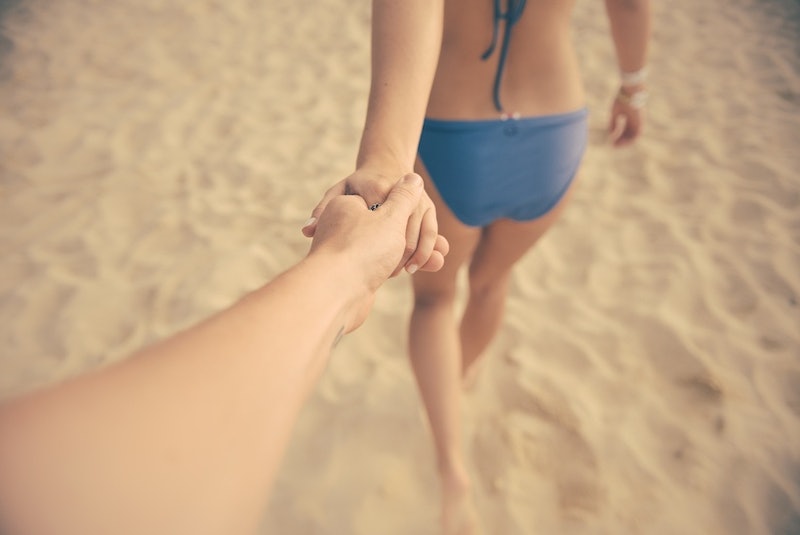 The new study commissioned by Expedia and Tinder, but conducted by Gfk, a global marketing research company, delved into the who and what of Americans. Not only did they look into where the most good-looking people live, but the top proposal spots and how soon in a relationship someone is willing to travel with a new partner.

What it found was 30 percent of Americans are totally into going away for a weekend within the first one to three months of dating, 14 percent were cool within the first month, and 16 percent would wait a year before they went down that road. What the study also found was that for 88 percent, good restaurants determined their locale; 82 percent felt touristy things were paramount; and 80 percent felt that a room with a view would make the entire trip worth it. As a foodie, I'm totally with the 88 percent. But back to the topic at hand.

So, according to the study, where do the most attractive dating pools live? Here's your top five, so you know where to go during your next vacay.

Having gone to Rome on my honeymoon, I can attest to the fact that it's gorgeous and its inhabitants are equally so. It's also a very friendly city (the Italians just eat up that American accent), and although not as laid back as other places in Italy, is still very much relaxed compared to the lifestyle in the Northeast.

Also, good-looking folks aside, there is food, Italian food, as in fresh pasta and something called pizza. Can you imagine chowing down on amazing pizza while eye-spying some hot men and women? I can. It's awesome.

All I can assume here is that half-nakedness inspires sexy thoughts. Also, Cubans, who make up a decent percent of the population, are like, OMG. Miami also has a gorgeous gay population, and we all know that where the gays are, beauty just inherently lives...which you probably knew if you saw The Bird Cage. I'm talking more about Hank Azaria's character here, as opposed to Nathan Lane, although Lane is lovely in his own way.

Oh, Paris. As someone who's married to a Parisian and spends almost half her year there, I can attest to the fact that Parisian men and women are beautiful. Of all the countries I've been to (and I have 18 under my belt), Paris is the only city where you realize, at least as an American, that you have zero clue as to how to dress yourself. Even when my partner and I put on scarves before going out, the exact same way mind you, his looks like a work of art and mind looks like I drunkenly decided to wrap something around my neck for fun. Parisians just have something about them that can't be explained.

Rio is the only place on this list I've yet to go to, but it's next on the list. However, as someone who's mildly obsessed with the Brazilian culture and has watched 90 percent of its soccer matches, I think we can all agree that Brazilians are stunning. Just look at Gisele Bündchen, Adriana Lima, and every single soccer player on their national team.

And, coming in at number one, is Los Angeles. Why? I do not know. Maybe because celebrities live there? Although, if you want hot celebrities, you should just come to New York City. I mean, we have that sh*t in the bag. But, in L.A.'s defense, I do imagine they're probably less pale out there, if that's your thing.