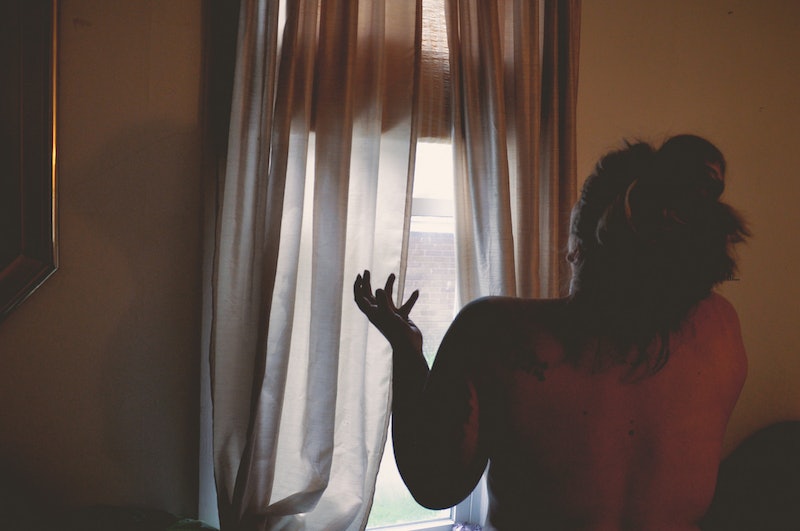 Even though no one would blame you for stopping in the middle of a session of terrible sex and saying that it's just not going to work out tonight (or possibly forever), what normally happens is that we just ride it out until the translucent, sticky end. After all, dealing with someone's awkwardly moving pelvis for less than an hour is usually worth not crushing their ego by telling them you seriously hate being naked with them. If you're in a relationship with them, you can cross your fingers and hope they (or you) are just having an off night, but if it's a FWB or one-night stand, it's much easier to avoid having sex with them ever again and letting them go on their merry way. But for that hour-ish that you're stuck with them, some pretty strange thoughts tend to run through your head.

During particularly bad sex, I get a bit of an inner monologue, a-la J.D. from Scrubs. It is perhaps a little bitchier and more callous than what normally passes through my mind, but hey, you can't blame a girl for getting bitter about this stuff. And the thing is, I know I'm not alone. If you've ever had any of these thoughts during terrible sex, put yo hands up! Then go have awesome sex to make up for it.

1. OK, we're off to a rough start, but that doesn't mean anything. Right? RIGHT?

2. What is that move? Have they actually slept with someone who likes that?

3. Maybe shifting my hips a bit will make this feel better.

5. "You like that, don't you?" I mean, that was more of a groan of boredom than a moan of pleasure, but whatever.

7. It sucks even when I'm on top? Maybe I'm the problem here.

8. They seem like they're enjoying themselves, at least. I was foolish to think I was the problem. I'm flawless.

9. I wonder how my boobs look from his perspective. Probably all floppy and weird.

10. But they should expect that, right? I mean people have to know that the way I look in a push-up bra is way different from when I let it all hang loose.

11. Speaking of which, I'm pretty sure I've worn the same bra for five days in a row. Is it normal to be that gross?

12. Mental note: wash that bra tomorrow. Also those shorts that you're going to wear this weekend.

13. They just asked if I'm OK, which means they definitely caught me staring off into space. Oops.

14. Missionary again? Sure you don't want any sprinkles with all that vanilla?

16. That high-pitched panting thing they're doing might have just made my vagina shrivel up.

17. They says they're almost there, so hopefully we can get this over with soon.

18. Maybe some porn-y noises will help?

19. That definitely sounded more like a dying baby elephant than a sexy moan. Never trying that again.

20. Question: Do men's magazines tell their readers that they should just jackhammer their partner's vagina during sex?

21. That's the second "almost there" I've heard in 10 minutes. Let's hurry things along.

22. Would I be a terrible person for thinking of Henry Cavill right now?

24. Who knew sex with Superman would be this unsatisfying?

25. "Did you come yet?" Seriously? I thought we'd established long ago that it's not happening during this sexual adventure.

26. Not stopping until I come? What terrible things must I have done in a past life to deserve this?

27. I should be more grateful. Some people's partners don't care if they get off. Some people can't even get laid. Maybe I'm really hashtag-blessed.

28. Ugh. They're really serious about this.

29. Fine then. Here comes the fake orgasm, there goes my dignity.

32. Judging by that face, it seems to fall on the "sexy" end of the spectrum.

33. I hope it's not noticeable that my cries of "OH GOD YES" are out of relief rather than pleasure.

34. Oh, pillow, you bring me levels of satisfaction that no partner ever could.