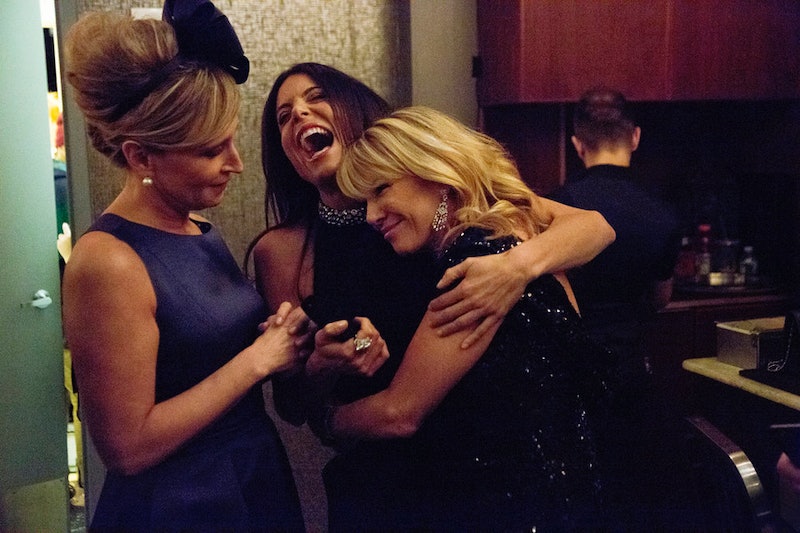 Did you know that Bravo's The Real Housewives of New York City is celebrating its 100th episode on Tuesday, June 30? It's hard to believe it was seven years ago that we first met the Big Apple's royal ladies. So much has changed since Bethenny Frankel, LuAnn de Lesseps, Alex McCord, Ramona Singer and Jill Zarin graced our screens in 2008. But, although the cast has shifted a lot since that first season, the show has always maintained some core values that I think are really important. I believe it’s time we all took a moment to stop criticizing the RHONY ladies, and instead, give them a shout-out for empowering women everywhere.

Although the series can be misconstrued as simply a reality show full of bickering women, the people on the show are actually really inspiring. From Bethenny Frankel raising her daughter by herself to Ramona Singer's flourishing career to Dorinda Medley's general awesomeness, these are the kind of people I aspire to be, and frankly, the kind of people I idolize. But, I shouldn't be the only one. So, in honor of the 100th episode, here are six reasons the RHONY ladies are worth looking up to.

1. They Care About One Another

Now, I don’t know these ladies personally, so I’m only speaking from what I see on the show, but New York is a dog-eat-dog kind of city, and I think that these women actually do care about one another to a large degree. They argue the way my friends and I do, and it’s refreshing and relatable to watch. How many times have you had moments where you wanted to stick your friend’s “face in the caviar?” (Well on a budget like mine, it would be onion dip, but I digress.) At the end of the day, they're still your friend, no matter how much he or she pisses you off. And, I think these women do love each other and have been able to connect with one another in a city that can be extremely lonely and overwhelming.

With the exception of two of the cast members on the current season, the ladies of RHONY are single. In the other Housewives cities, the husbands usually get pulled into storylines and reunions; they are even a part of the interview segments on The Real Housewives of New Jersey – but here, we’re really focused on the women, watching them go through struggles we all face – cheating, death, career reinvention, and more.

While every Real Housewife now seems to have her own line of this or brand of that, when you look at the cast of the New York City housewives, many of them rose to “fame” by building her own empire. Heather Thomson is a CFDA-nominated designer and is the founder of the fashion shapewear brand “Yummie” (she didn’t join Real Housewives until four years after the brand launched); Carole Radziwill may have married a prince, but they met while she was working on assignment – as a ABC News reporter. Ramona Singer founded her own fashion company, RMS Fashions, at the age of 29. Bravo’s newest housewife, Dorinda Medley, founded her own cashmere line, DCL Cashmere, when she was living in London. And of course, we cannot forget entrepreneur extraordinaire, Skinnygirl mogul Bethenny Frankel.

4. They Have Fun Together

These women often go out and have fun together – hell, they put my fresh-out-of-college friends to shame. If I have a solid group of girlfriends I can shamelessly go clubbing with in thirty years, I’ll consider myself extremely lucky.

Most of the drama in New York comes from direct confrontation between the ladies. When these women have problems with one another, they address them headfirst, as opposed to trying to secretly sabotage one another. They don’t have time for games, and they don’t back down, and these are traits that women everywhere can channel to be successful in their careers and personal lives.

6. They Honor The Sanctity Of Brunch

They know it’s the only reason to get out of bed on a Sunday, and for that reason alone they're awesome. But all the other stuff is nice, too.

More like this
‘RHOBH’ Newcomer Sheree Zampino Is Still Close To Ex-Husband Will Smith
By Brad Witter
What’s New On Netflix: A Victoria Justice Rom-Com & The Return Of David Letterman
By Arya Roshanian
Everything We Know About Chèrie & Jessey’s Abrupt Exit From Bling Empire
By Alyssa Lapid
Twitter Is Upset About The 'American Idol' Top 3 Results: "Who TF Is Voting?"
By Jake Viswanath
Get Even More From Bustle — Sign Up For The Newsletter