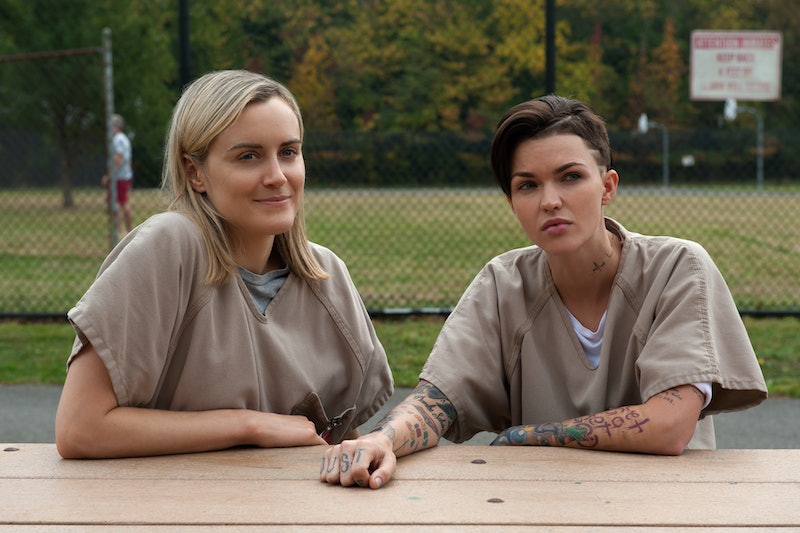 Piper Chapman: Most hated protagonist in TV history? OK, that's unfair, she has her charms, but Piper's Orange Is the New Black popularity has waned over the course of the series, and she's basically an antagonist rather than a protagonist at this point. But, her recent shenanigans aside, the big question we need to ask is: When is Piper due to get out of jail? After all, the show started out following her journey, so if Piper leaves prison will the show end, too? Fortunately with or without Piper, I think the show could go on. Still, how much longer is she guaranteed to be on it?

Her original sentence was extremely short compared to some of the women. Most of them were spending years in prison, and even with good behavior still had long sentences — and yet Piper's drug sentence was only 15 months. She says it nervously in the pilot, after meeting Morello in the van and making her first friend. But, Piper hasn't exactly behaved perfectly since she arrived in Litchfield, so it's likely her sentence has increased.

Her perjury — claiming not to know Alex's boss on the stand — may have spared her the vengeance of an angry drug kingpin, but the US Justice System might not have appreciated it so much, and they can prosecute her for criminal contempt of court, which can can result in jail time. However, in Season 3, there was no mention of Piper having any additional time on her sentence, so maybe she got away with things.

But, then, after her Chicago perjure-for-love incident, Piper managed to do something even more dangerous: Go after some criminal conspiracy charges. Stealing underwear from "Whispers," smuggling it out of the sewing room, and distributing them to prisoners, all before smuggling the panties out of the prison, into her brother's hands, while barely paying more than Ramen noodle flavor packs to her workers.

Piper's transformation into a huge villain is a whole separate subject, but she faces an incredible increase in prison time if she's found out. According to FindLaw.com, all you need for a conspiracy charge is an agreement between two or more people to do something wrong. The planning is just as illegal as the other parts, so all of her barely-hushed bathroom conversations really need to stop. That's not even getting into the charges for stealing while in prison — more time and potentially a hefty fine. The best case scenario is that she gets a big dose of embarrassment: Call it the "OJ." When OJ Simpson was caught stealing cookies (seriously) from the prison cafeteria, it seems the authorities were content to watch the story spread across the Internet. I suppose Piper could get the humiliation treatment.

So, while Piper Chapman will technically be due for release in just a few months, who knows what OITNB will do with her character? They could send her back to her WASPy family, never to be seen again, or let her get sent away for a dozen more years because of her latest money-making venture. I tend to think that her underwear scheme, which turned her from a somewhat clueless rich lady into a stone cold criminal, could keep Piper on Orange Is the New Black for many months to come.