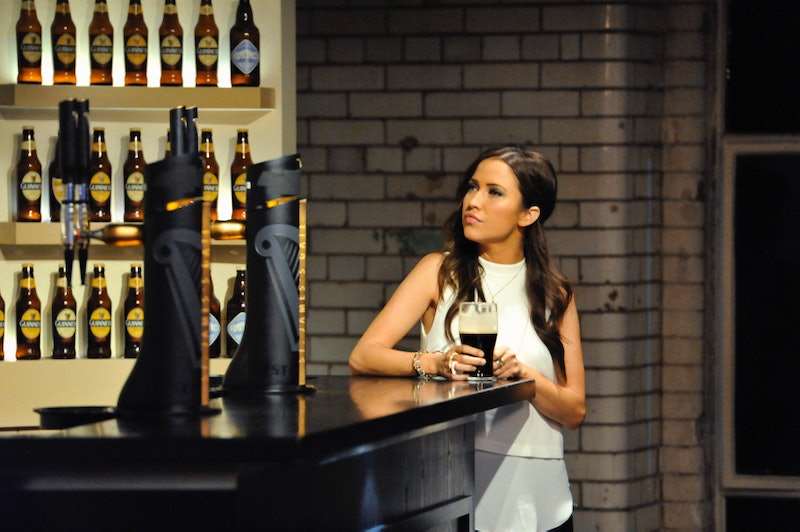 In no season of The Bachelor(ette) has it even been so evident that the contestants are living in an alternate reality. It's not that Kaitlyn's a bad Bachelorette, or even that she's making bad decisions — It's totally her right to have sex with the guy she's dating. No, it's that she is using real world dating logic in a situation that could not be further from what dating is like in the real world. Things happen in The Bachelor universe that don't happen in real life.

She's sleeping with a guy she's really into after they had a romantic third date; she's getting a little freaked out at a different guy for being totally in love with her after having only known her for a few weeks; she's surprised that men keep dramatically breaking up with her when she's been nothing but nice to them... those are normal reactions. They become slightly less textbook, however, when you remember that Kaitlyn, in the journey to finding her husband, has had at maximum, 25 boyfriends, and at minimum, six.

Those are things that would never happen if Kaitlyn was back in Canada going to grab a coffee with a guy she met at the gym, or whatever, but when you get more intimate with one boyfriend while holding down relationships of varying levels of seriousness with eight of her other boyfriends, one of whom she told she was falling in love with , having sex without Chris Harrison's permission can, apparently, make your life a living, weeping hell. And, it's not just Kaitlyn! Many a Bachelor(ette) has assumed that dating 25 people would just be like a more exciting version of dating one person. But, I am here to tell you that slowly picking off the clingers and the fame-seekers while trying to fall in love, all while being filmed and later televised for millions of people's entertainment does not present many real world scenarios. Here are some things that happen on The Bachelor that you can thank your lucky stars absolutely never happen in real life...

1. Everyone Agrees to Dabble in Light Polygamy

These are not people in Utah with terrible haircuts and a show on TLC. The people that go on The Bachelor/ette are often lawyers, investment bankers, personal trainers... they have lives dictated by social norms to go back to, and yet here they are, agreeing to enter into a relationship with 25 sister wives and brother husbands. Because, on this show, the contestants aren't just all dating one person individually, they're also living together, going on dates together, and often watching each other makeout with their shared partner of choice. That is the actual plot of Sister Wives without the kids. It's like Sister Wives: The Prequel.

2. Getting People "Out of Their Comfort Zone" On First Dates

Speaking of, for a show about dating, the show really miffs it in the realistic dating department. Because, while your average single person spends every bit of energy they have trying to make a first date as non-awkward as possible, The Bachelorette likes to dress the men up in diapers, make them sing, occasionally have them punch each other in the face, and all while trying to impress their shared girlfriend. The Bachelorette will tell you this is because she wants to see if they can have fun and get out of their comfort zone. But, you know what you don't want to be with the person you're trying to spend the rest of your life with? Uncomfortable.

Should we even talk about the two-on-one date? It's like Russian Roulette with one bullet and the bullet is full of awkwardness and heartbreak. No person in their right mind would take two people on a date at once in real life.

4. Someone Else Plans Your Helicopter Dates

One thing The Bachelor universe possibly has going for it that real life doesn't, though, is that someone is both planning and paying for your dates. No exhaustive Tinder message trading figuring out where to meet up, or trekking it across your city and not being able to drink the two glasses of wine you need because you have to drive back home. No, on The Bachelor, you can drink as much as you want (pretty much always too much), do interesting stuff (pretty much always scary or embarrassing), and there are no tricky waters to navigate about who's paying at the end (y'know until the very end when you get back to the real world and realize you've never had a conversation about money).

Of course the weirdest thing about all those beautifully planned dates is that nobody touches their huge plates of delicious looking food. Ever. Nobody eats. NOBODY EATS!!!

And, of course, once the Bachelor(ette) has been on enough of these awkward, hunger-inducing dates, it's time for Chris Harrison to deliver the lucky man or woman, and their lucky remaining three contestants, a hand-written note that basically informs them they can have sex if they want. And it won't even be filmed! And beyond the Fantasy Suites we've come to expect as bizarre, Kaitlyn's season has introduced and even weirder concept: if the Bachelorette goes ahead and has sex with one boyfriend without Chris Harrison's explicit permission, then he will casually suggest that she better have sex with all of her other boyfriends... just to be fair.

7. You Ask the Family's Blessing to Get Married

The contestants usually take the Bachelor(ette) home to meet their families before they've even been given the opportunity to sleep together. That's unusual perhaps, but not unheard of. What it unheard of, is man approaching their girlfriend's parents and asking if they have their blessing to marry their daughter, you know, allowing for the idea that there are three other girlfriends who they also might marry and whose parents are also being asked the same ludicrous question. With the Bachelorette (allowing for the show's heavily enforced gender norms, here), it's even weirder: the remaining two boyfriends have to ask the Bachelorette's parents for their blessing, but it only matters if they're the chosen one. That's like asking your boss' boss for a promotion when you and your boss' boss both know that your boss is strongly considering firing you.

That many of the parents are often down with this without any hesitation is probably the most persuasive argument that this show is filmed in another dimension. But, hey, it makes for great TV!