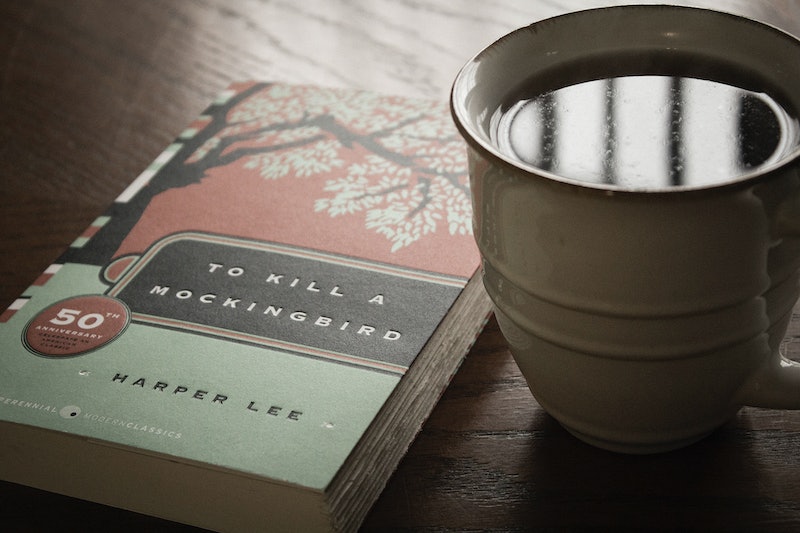 OK, so July 14 is not quite Christmas, but it might as well be for all the Harper Lee-mania surrounding the much-anticipated release of Go Set A Watchman (“much-anticipated” being a colossal understatement). In case you need a recap, Go Set A Watchman returns readers’ beloved Jean Louise Finch, aka “Scout,” to Maycomb, Alabama, 20 years after the plot of To Kill A Mockingbird ends. And even better, on Tuesday, we found out that The Wall Street Journal will be publishing the first chapter on July 10.

The manuscript has been surrounded by drama almost from the beginning — it was lost, and then found, and then suspected of being found earlier than it was originally declared found. There was much excitement over the reveal of Watchman 's cover this past March. And finally, the novel broke the HarperCollins record for the most pre-ordered book ever. It’s no wonder every book club from Los Angeles to New York City has spent the last few months awaiting publication with bated breath. Yes, Christmas might as well be coming.

In honor of the wait that’s not quite over (but seriously, SO CLOSE, you guys) I’ve imagined what some of Harper Lee’s most iconic characters would be like if they lived circa 2015. Because, let’s be honest, we all kind of wish Scout and Jem were our BFFs, too.

Scout’s father, Atticus Finch, employs a rather hands-off style of parenting that risks enabling a vibrant personality like Scout’s to run amok, Girls Gone Wild-style. Instead, influenced by Atticus’s subtle guidance toward good-heartedness and justice, Scout channels all that rambunctious energy in a positive way, and quickly becomes a young feminist (and eventual environmentalist, due to her love of climbing trees).

Our modern day Scout, like the 1960s version, is ever unable to keep a thought — necessarily shared or otherwise — to herself, has leveraged those early acquired skills to become a brutally honest motivational blogger (think Patti Stranger meets Brené Brown), with her own line of ethically sourced “Tomboy Couture” fashion line on the side. Sure, that might seem like a lot for a 6-year-old girl, but Scout did learn how to read (on both her Kindle and iPad) before she’d even started school.

In 2015, the widower Atticus has stepped into the world of online dating, although he’s hesitant to list his real job — Defender of Justice — on his profile. (But don’t worry, Atticus is way too shy about the online dating scene to make any real headway there, and before too long he FINALLY realizes that his next door neighbor, the similarly justice-minded Miss Maudie Atkinson, is actually perfect for him, and they fall in love in a whirlwind only otherwise seen in a Nicholas Sparks novel.)

Although a member of what many would consider the 1 percent, Atticus keeps his privilege private, Fortress of Solitude-style, and uses the majority of his hero’s earnings to commit anonymous acts of kindness. Also similar to Superman, 2015 Atticus has a custom-designed logo, and probably a cape, although nobody would know it from looking at his generally inconspicuous, bespeckled self. The lawyer-by-day, superhero-by-night act works well for 2015 Atticus, who doesn’t enjoy spending too much time in the limelight, unless absolutely necessary.

Instead of fantasizing about playing football, a modern-day, coming-of-age Jem dreams of playing hockey. Yes, even in a town like Maycomb, Alabama, which has never seen an outdoor ice rink. Atticus lets him order the NHL cable package, because let’s be real, hockey totally trumps football these days.

After witnessing his father defend the wrongly-accused Tom Robinson, only to be thwarted by the corrupt American court system, Jem enters something of a jaded, blue period of acting out rebelliously. He gets a couple of tattoos, smokes weed behind the woodshed, and spends the better part of a summer riding around America on a motorcycle he’s too young to have acquired the driver’s license for yet. From New York to California, he witnesses different types of America than he was exposed to in the insulated town of Maycomb, and with his faith in the value of humanity somewhat renewed, his boyhood dreams become more focused on the greater good.

After sending Tweets to public figures like Tom Morello, Al Sharpton, Noam Chomsky, and Cesar Chavez (who is still alive in 2015, because this is my imagination so I get to do that), Jem joins several prominent activist movements: organizing protests, volunteering, and all-around challenging the status quo. Ever inspired by his father, Atticus, Jem never backs down from the threat of injustice, even at his young age — a quality that both the 2015 and the 1960 Jem Finch will always have in common.

In 2015 Boo Radley will have ditched the evil father figure for good, and all that creepy reclusiveness translates into a cooler, more hermetic, living-off-the land existence. Probably in a Tiny House (complete with remote control-operated room darkening shades that let in only enough sunlight to ferment his homemade kombucha), set up on some privately owned island so small it doesn’t even appear on Google Maps, because then maybe the poor lad can get some sunlight on that translucent skin of his without the risk of encountering other humans.

He’ll probably also be one of those anonymous, best-selling poets whose work gets optioned for an HBO drama, but who remains a complete mystery to his fans, and never seeks public recognition. He also does a lot of complicated, Sheldon Cooper-style math equations in his spare time. Why? Who really knows? I just get that vibe from him.

While the story of an innocent black man being “guilty before proven innocent” does hit a little too close to 2015-times for comfort, in my imaginary present-day world, if the sincere, hardworking, and unambiguously not-guilty Tom Robinson is wrongfully convicted, he’ll automatically have the ACLU and the Innocence Project on the job. Most likely, he’ll also be that one guy you sometimes hear about who uses his time behind bars to rally with his fellow prisoners about nonviolence and spiritual awakenings. Journalist Sarah Koenig will be broadcasting a really addictive, crowdfunded, 10-episode podcast about his life. By the time he’s acquitted, he’ll have a six-figure memoir deal with a Big Five publishing house, and an interview with Diane Sawyer lined up.

In 2015, Scout’s impeccably well-dressed “curiosity,” the “snow-white, duck-fluff-haired” Dill Harris will definitely have a gig staring as the youngest cast member of Queer Eye for the Straight Guy (that’s still a thing, right?) when he’s not running around Maycomb behind Scout and Jem. It won’t be long before the Truman Capote-inspired character is offered his very own television show on TLC.