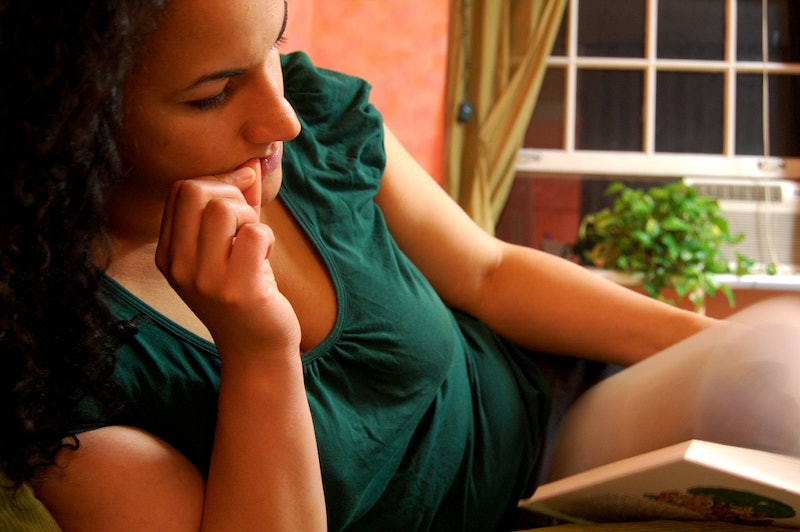 Biting your nails is a terrible habit, because there’s nothing healthy or productive about taking time out of your day to gnaw away your nails and nail beds. That being said, it is also a terribly difficult habit to quit, and there are plenty of lessons to be learned from trying to stop biting your nails.

I should know this because I’m a perpetual nail biter. And I have been for years, ever since childhood. I would always bite and chip at my nails as a way to deal with stress and anxiety, but it also became some sort of a hobby — albeit one I was oblivious to. Because every time I was deep in thought, nervous, or simply bored, I would rip at my nails and cuticles and cause myself to bleed from almost every finger. That doesn’t sound like the greatest hobby, if you ask me.

But at the start of the new year, I made a resolution to stop. I know what you’re thinking: New Year’s resolutions never actually pan out. But I swore it to myself that I would learn to control my anxiety and nerves, and not take my feelings out on my nails — choosing instead to care for them and be gentle with them like they deserve. Seven months later, here I am with long, thick nails that are painted all pretty and such.

1. You Are In Control

And if you do take action towards making yourself quit, this is extremely important to remember. I once thought that there was no way I could stop biting my nails, just because I believed it was a characteristic of who I was. I was comfortable with that, but then I asked myself, "If I am in control of what I am doing with the rest of my life, why can't I control biting my nails also?"

2. You're Only Doing It For Yourself

While you may have a mother who has been begging you to quit biting your nails ever since you started (like me, unfortunately), deciding to quit is something that is all your decision. Sure, you might be able to live with terribly disheveled and crooked nails your whole life. You might run into a few infections, or some terribly sensitive cuticles, but that's nothing, right? But if those situations sound terrible to you, you might make a decision to stop.

To be able to stop biting your nails, it has to be between you and yourself. If I had a nickel for every time my mom asked me to stop, I would be rich. But it wasn't until I personally made the decision to stop that I really started taking action. And that's true for most things. So if you're going to stop, do it for yourself and no one else. Because it's only really affecting you, after all.

Like I said before, I definitely had my moments of weakness throughout my whole "I'm going to stop biting my nails" crusade. But that's OK, because like any bad habit, it's normal to give in once or twice. No, I'm not saying you should go ahead and pull apart your nail beds if you haven't already. But I am saying if you end up feeling really nervous, or if you don't realize you're doing it once or twice, it's OK.

The important part is being able to realize that you did give in, and understanding why exactly that happened. Confront your feelings! Once you can comfortably do that, you can be aware of it when it may happen again in the future, and thus, take a different plan of attack.

Maybe it's because I'm a nail biter, but I never thought super long nails were pretty. I hate nails that curve because of how long they are, and ones that tap on everything and create that horrid sound. Ugh, I'm cringing just thinking about it. But going into my "I'm going to stop biting my nails" process, I knew, for sure, that I never wanted to grow out my nails to that degree.

Sure, ripped cuticles and raw nail beds aren't any prettier than super long nails, but I consciously knew that. When I grew out my nails the first time, and they extended beyond the tips of my fingers, I got anxious and, well, bit them. The next time that happened, though, I took a different approach. I knew I wasn't comfortable with my nails super long, and I knew I had to get rid of them as soon as possible. So instead of biting them, I just clipped them. What a wonderful feeling it is to have clipped your finger nails for the first time in your life! Ultimately, knowing your limits is important to being able to succeed. If you're uncomfortable with the length, clip them. If you know you hate that bad tasting nail polish that's supposed to deter you from biting, avoid it and just use a clear top coat. There are many alternatives, so find what you're most comfortable with.

5. Regularly Remind Yourself Why

At the end of the day, it's easy to forget why you're doing something that seems so difficult, if not impossible, to achieve. But it's important to remind yourself of why you're doing it, and not lose touch with that reason or reasons. In my mind, breaking my bad habit would mean I would put my time to better use, that I would decrease my stress and anxiety, and well, that I would be able to use all the pretty nail polishes my sister gifted me. That may not be the ideal combination of reasons, but those are what really motivated me to avoid putting my fingers in my mouth and really apply myself elsewhere.

So put up sticky notes in your bathroom, make your background a photo of someone's pretty hands that really inspires you, and have a mantra to go over in your head every time you feel the urge to bite. Remembering why you're struggling with your decision is crucial to overcoming the bad habit, and being able to easily remind yourself of that every day is the easiest way to stay strong.

More like this
10 Talc-Free Makeup Brands For Safer Eyeshadows, Powders, & More
By Audrey Noble
2022's Top Wedding Hair & Makeup Looks, According To Pinterest
By Olivia Rose Ferreiro
What Are "Gym Lips" & Why Is BeautyTok So Obsessed With Them?
By Olivia Rose Ferreiro
Kim Kardashian's Ombré Pink Mani Features A Nod To BF Pete Davidson
By Paris Giles
Get Even More From Bustle — Sign Up For The Newsletter