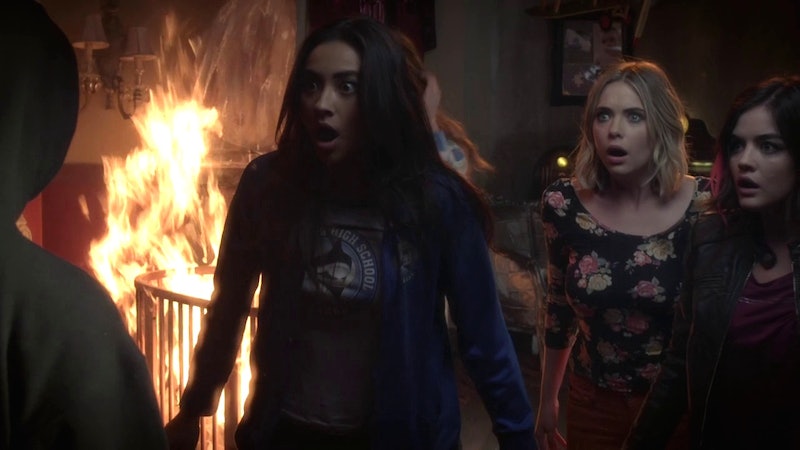 This season of Pretty Little Liars may be called the #SummerofAnswers, but fans are still waiting for the answer to the biggest question in the series' history: Who is Charles DiLaurentis? We know that he's Jason and Ali's secret older brother, spent most of his life in Radley, and either is Big A himself or inspired someone to use his name while torturing the Liars, but that's about it. Luckily, there are plenty of Pretty Little Liars theories about Charles that can at the very least point us in the right direction, and it turns out, the woman who started it all has a few of her own. In an interview with Bustle's podcast Taking This One To The Grave, the author of the PLL book series Sara Shepard shares which theory she's most partial to, as well as which fan favorite character she still hopes could turn out to be Big A. Of course, like many fans, Shepard has adjusted her theories over the course of Season 6. " My big theory [was] that Charles was somehow related to the DiLaurentises and that’s where it stopped," she explains. "I feel like all of the suspects have been exhausted and I heard that they’re not going to invent a new character to be A, so who could it be?"

That's the question on everyone's minds, and Shepard is quick to admit that she doesn't know what I. Marlene King and the rest of the TV series' writers have in store. However, as the person who created these characters and has crafted a few A reveals of her own, she definitely has a unique insight into Pretty Little Liars. Plus, Shepard 'ships Haleb hard, so she clearly knows what she's doing. You can listen to the full interview below to hear everything the author has to say about her revised Charles theories, all of the 'ships, her biggest PLL regret, and her newest book series The Perfectionists.

After sharing my two biggest Charles suspects, Officer Garrett Reynolds and Doctor Wren Kingston, with Shepard, she immediately latches onto the idea of Wren as Big A and expresses her own suspicions about Melissa's ex-fiancé. "Wren is a good idea and what’s different about Wren in the show is that he worked at Radley, and in the books, he was just a doctor, he had no connection there at all," she says. Shepard raises an interesting point, Pretty Little Liars must have changed Wren's path and given him that Radley connection for a reason.

"Wren hasn’t shown up lately in the show, but he definitely was sort of a presence there, and maybe [A] is somebody that we’ve seen there a lot." Shepard can also confirm something that King has stated numerous times in the past: the plan for Charles started years ago. "They’re very smart writers and when I went [to the set] back in November, they definitely knew where things were going and I think they had known for a long time." Wren is one of the few characters who could be Charles and also appeared in the series pilot, so all of this definitely works in his favor.

Oh, Ezra. Like Wren, Mr. Fitz has a very different trajectory in Shepard's books, where his and Aria's (illegal) relationship doesn't last very long, as it is exposed, and her main boyfriend is actually Noel Kahn. Though Ezria 'shippers may not be happy to hear this, Shepard would still like to see him be revealed as Big A.

"The thing I’m not crazy about with Ezra — I love the storyline that he was A, I thought that was so fun and clever and weird," she says. But we all know where that story ended. "I was like, 'You’re writing a book — argh.' I’m hoping that maybe Ezra will have some connection to Charles too. He was so creepy...I’m thinking of that episode when he’s skulking around in the lair." Could we see the return of EzrA? He's been on Pretty Little Liars from the very beginning, and like Wren, no longer has a book path to follow.

Shepard may not have any control over who is revealed as A in "Game Over, Charles," but she will definitely be excitedly watching right along with us to find out — and crossing her fingers that Ezra or Wren is hiding under that mask. Check out past episodes of Taking This One To The Grave below, and be sure to follow Bustle’s SoundCloud page for even more.

More like this
Everything To Know About The 'Pretty Little Liars' Reboot On HBO Max
By Mary Kate McGrath and Jack Irvin
'The Summer I Turned Pretty' Book Ending Is An Emotional Rollercoaster
By K.W. Colyard
The Future Of 'All Creatures Great & Small' Is Confirmed & Wedding Bells Are Ringing
By Rebecca Fearn and Frances Stewart
A New Season Of The Midwich Cuckoos Could Be Coming “To A Town Near You”
By El Hunt
Get Even More From Bustle — Sign Up For The Newsletter