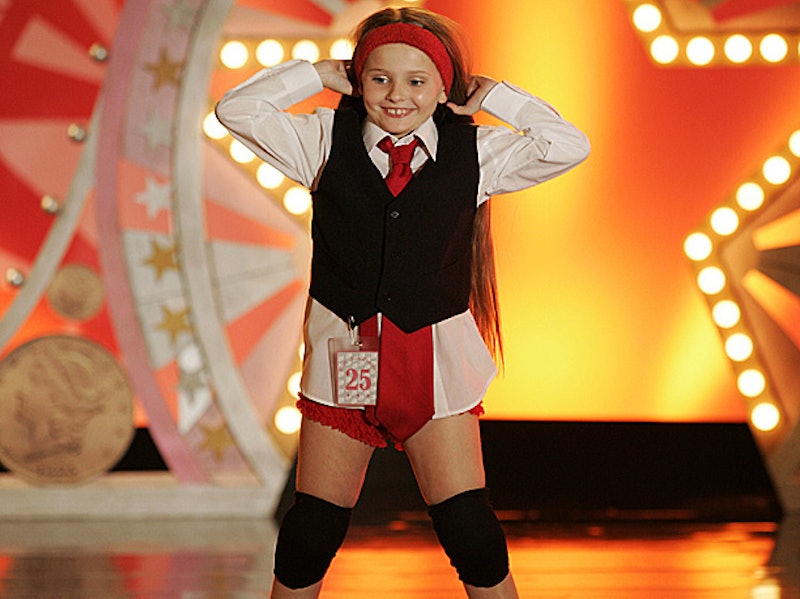 Before I watched Little Miss Sunshine I would never have been able to tell you what a beauty pageant was. As I got older and before I became a massive feminist, I easily fell prey to the idea that all beauty pageant contestants are vapid and unintelligent. It's a basic trap of the patriarchy: Make women feel like they are worth nothing but their looks; and as for the women who do adhere to strict beauty standards, make them feel that they have nothing else to offer. A woman is either too ugly to be worth anything or only worth anything because she is beautiful — effectively erasing the value of anything outside the world of aesthetics. The end goal is that everybody feels like crap about themselves, whether they're classically beautiful or not.

This is why on rewatches of Little Miss Sunshine, I'm thrilled when the dad is refusing Olive her ice cream, whilst Miss California encourages all the ice cream eating in the world. For once, pageant contestants aren't shown as perpetuators of the body shaming that's rife in beauty contests. Although they participate in arguably sexist competitions, they are not the creators of them — misogynistic men like Donald Trump are. It's just another example of how women are shamed for issues created by men.

Regardless of your stance on beauty pageants like Miss USA, it's obvious that the women involved have been unfairly judged before they've even reached the panel of judges.

It's pretty easy to laugh at some beauty pageant contestant's answers, but in reality, the questions these women are asked are similar to those from a presidential debate; and not only that, the contestants have to answer in less time than it takes to brush your teeth.

That they even attempt to answer is impressive, never mind the meaningful answers given by the contestants who don't make it into judgmental YouTube compilations.

Even outside of all the crazy strict beauty standards you have to adhere to before you're even considered for Miss Whatever-State-You're-From, there are a whole load of ridiculous rules and regulations that a contestant must adhere to. Such as these crazy marriage rules.

3. They Aren't Allowed To Lose Their Cool

These gorgeous Latina Miss USA contestants eloquently spoke out against Donald Trump's recent racist comments. These women (like everyone) have strong opinions of their own, but cannot afford to lose their cool whilst speaking out on such matters. They beautifully handle answering the question of why Trump's comments were offensive, and also why they still choose to remain in the pageant — to give Latina women representation at Miss USA.

You can literally be crowned the most beautiful woman in the United States and there'll still be a whole host of losers on the Internet calling you ugly. I mean, what else can you actually do?

5. Focusing On The Beauty

You know what's infuriating whenever reading think pieces about beauty pageants? As forward thinking as these articles usually are on calling out body shaming and sexism, they outright ignore aspects of the competition that focus on what these women have to offer. They may be called beauty pageants, but more often than not the "talent" portion of these competitions are the best part.

These women show that they are beautiful enough to model, intelligent enough to nail an interview, and in possession of an amazing wealth of talent. Take, for example, Miss USA 2014's Nia Sanchez, who currently holds a fourth degree black belt in Taekwondo.