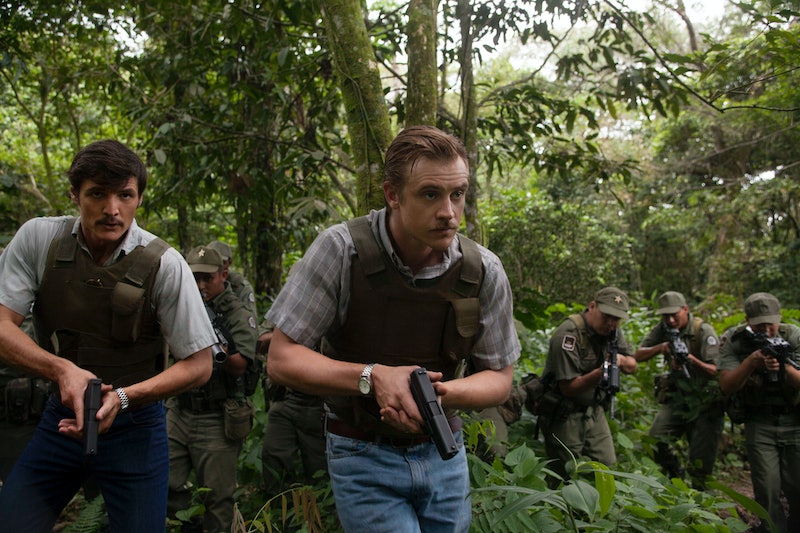 Remember the days when Netflix original programming simply meant House Of Cards and Orange Is The New Black? Now, the streaming service has expanded its stable of original shows so much that it's hard to keep them all straight. 2015 alone has seen the debuts of Unbreakable Kimmy Schmidt, Bloodline, Daredevil, Grace And Frankie, and Sense8, with Wet Hot American Summer: First Day Of Camp right around the corner. Now you can add one more title to the list of shows you need to binge ASAP: Narcos , a new drama about drug cartels that will be premiering this August.

The Netflix execs are a savvy bunch, as they've yet to debut two original shows that are anything alike. We've already got political thrillers, prison dramedies, comic book adaptations, and trippy sci-fi actioners. Now Narcos will be adding true life crime drama to the mix. According to Netflix, "this raw, gritty series chronicles the gripping real-life stories of the drug kingpins of the late 1980s and the corroborative efforts of law enforcement to meet them head on in brutal, bloody conflict. It details the many, often-conflicting forces — legal, political, police, military and civilian — that clash in the effort to control cocaine, one of the world's most valuable commodities."

Even if this doesn't sound like something that would normally be up your alley, here are six reasons to be excited about Netflix's newest show anyway, based on the new trailer that just dropped on Wednesday.

The 40-year-old Chilean-American actor made waves among HBO fans when he suddenly appeared in Season 4 of Game Of Thrones as vengeful Dornish prince Oberyn Martell — and then again when he just as suddenly exited the show later that season, after having his head squashed like a melon in a fight to the death with The Mountain. Pascal will star in Narcos as Mexican DEA agent Javier Peña.

Following in the footsteps of HBO's True Detective, every episode of Narcos will be written and directed by the same two people: Chris Brancato (who also co-created the show) and José Padilha, respectively. Padilha has directed many critical and financial successes in his home country of Brazil, including the action franchise Elite Squad, which starred Narcos' own Wagner Moura. Padilha made his American directing debut with the 2014 reboot of RoboCop. Brancato has previously worked on several procedural series, including serving as showrunner for Law & Order: Criminal Intent, and most recently, NBC's critically-acclaimed (and sadly canceled) Hannibal.

Mad Men recreated NYC in the 1950s and '60s with stunning clarity, while Downton Abbey nails the style of 1920s England to a tee. But I feel like the 1980s are a sadly underrepresented decade right now; AMC's Halt And Catch Fire is pretty much the only show taking advantage of the period's distinctive tone. Big hair, bright colors, an obsession with fitness apparel thanks primarily to Jane Fonda and her fabulous workout videos... What's not to love?

The life of Pablo Escobar is a fascinating story, and one that should be tremendously exciting to watch unfold over the course of several seasons. He managed to work his way up from the son of a middle class farmer to "The King of Cocaine," and become one of only 227 billionaires in the world at the time, according to Forbes. By the early '90s, he was worth approximately $30 billion and, although he lived on a lavish estate he called Hacienda Nápoles, he worked hard to cultivate an image of himself as a modern-day Robin Hood, often donating money to the poor. However, he died when he was only 44, which should put a cap on the number of seasons Netflix can squeeze out of the man's life story.

Netflix shows tend to be fairly talky. They're usually stuff with talky politicians or talky inmates, talky happy families, or talky sad families. But Daredevil proved that when Netflix wants to do action, they do it right. That brutal, three-minute one-take fight scene in the second episode is still one of the greatest action sequences ever put to film. And, judging by the machine guns, foot chases, and rocket launchers on display in the Narcos trailer, Netflix is aiming for some high-octane action once again.

It's gotten to the point that I automatically distrust anyone without a mustache. Like this clean-shaven politician guy:

All 10 episodes of Narcos' first season will debut on Netflix on Friday, Aug. 28.

More like this
Watch The Gripping First Trailer For The 'Harry & Meghan' Netflix Doc
By Jake Viswanath
The 'Firefly Lane' Book Ending Teases Way More Tears To Come In 2023
By K.W. Colyard
Everything To Know About 'Firefly Lane' Season 2 Part 2
By Gretchen Smail
17 Wednesday Addams Quotes For Every Situation
By Grace Wehniainen
Get Even More From Bustle — Sign Up For The Newsletter