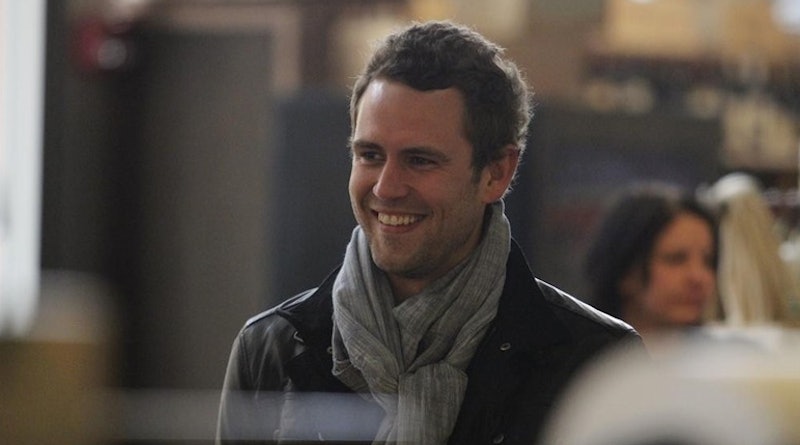 Every good reality show needs a good villain, and the producers of this season of The Bachelorette sure tried to paint recurring contestant Nick Viall as this season's. But, I feel the need to defend Nick Viall. Nick jumped into Kaitlyn’s contest somewhere around the fourth week, where he showed up to that painfully tone deaf rap contest as the guest of former Bachelor contestant Ashley I. Nick's sparks with Kaitlyn were obvious and immediate — these two were all over each other from the get-go. Because of their connection, suffice it to say that the other Bachelorette contestants were not exactly pleased that they would get a bonus dude joining them. Nick was the talk of The Bachelorette season, and now everyone needs to lay off.

For better or for worse, Nick has made it to the final two, so obviously he and Kaitlyn had/have some sort of a connection. I don’t know that it’s 100 percent fair that Nick and Kaitlyn were able to have a text/Twitter relationship prior to the show (that’s how they knew each other), but it is what it is. The strength of their bond has pushed them through to the final stages, despite all of the naysaying and infighting that the other contestants have put them through. I’m calling a truce, here and now — this is my “leave Britney alone” moment. Here’s why everyone needs to lay off Nick Viall and let him live his Bachelorette dreams.

1. Nick Really Put Himself Out There

Though it feels like everyone said that Nick wasn’t on The Bachelorette “for the right reasons,” that’s totally not the case. Nick’s last-minute addition to Kaitlyn’s season was a real leap of faith on his part. Of course, he knew that the producers would be happy to have him (drama, obviously), but how could he have known that he and Kaitlyn would actually hit it off in real life? He didn’t. To go on national television to figure that all out takes real chutzpah, and I think that’s commendable.

I would say that Nick telling Kaitlyn that Shawn B. bragged about sleeping with the girl of a country musician isn’t cool, but why in the world did Shawn brag about it to the other guys anyway? Keep that ish on lockdown, dude. Through all of the fighting (especially with Shawn), Nick was rarely the instigator. He just let Shawn keep the metaphorical punches coming, knowing that if he just stayed calm, he’d come out the other side looking much better. And, it’s true — Shawn was the one who looked like a crazy person during those fights.

3. Nick Has Had His Heart Broken

Nick’s family was super nervous when they met Kaitlyn, and I think a lot of that had to do with how destroyed he was after Andi. After all, they don’t want him to be that sad ever again (understandably). Their level of worry is indicative of how hurt he was, and for him to try it again means he’s got some character.

4. Nick Has So Much Respect For Kaitlyn

Nick and Kaitlyn had sex on the show, and Kaitlyn really got put through the wringer in public for it. Luckily and rightfully, Nick was on her side. He took to Twitter to defend her, meaning that he’s the stand-up guy I thought he was. After all, it takes two to tango, and Nick recognizes it.

All in all, Nick’s ability to throw everything out there for love is the number one reason why people should give him a break already. I’m on your side, Nick. Even if no one else is.