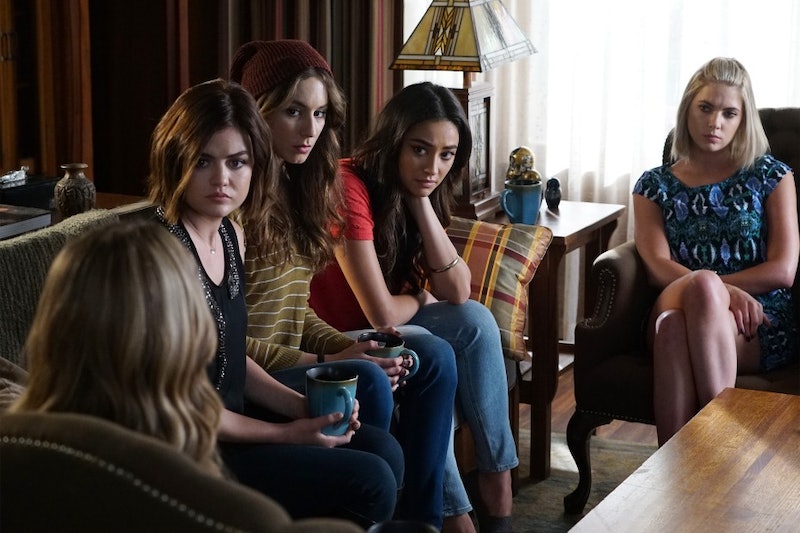 The Pretty Little Liars Season 6 midseason finale is fast approaching, and thus far the alleged "Summer Of Answers" has not quite provided all those answers fans were promised. Sure, it would be boring to hand us all the answers on a platter, but throw us a bone here! We have many Pretty Little Liars questions and, no pressure or anything, but the writers are running out of time to shed some real light on the central mysteries. And please, red herrings need not apply — we've had quite enough of them.

But, who am I kidding? We secretly love the fact that the Pretty Little Liars mystery never truly ends and instead only grows more complicated. It gives us an excuse to spend hours browsing Tumblr for theories and debating with our friends about what's most likely to happen next (and as for our friends who don't watch Pretty Little Liars... well, they know better than to bother us on a Tuesday night).

Pretty Little Liars devotees know that every time A has seemingly been apprehended, the Liars will shortly thereafter receive yet another menacing text message, typically signed "Kisses — A". We've been promised a big reveal in the finale (I'll believe it when I see it), but for now, I'd like to get some answers to these pressing questions.

1. Seriously, How Many People Are On The A Team?

So there's Big A, who should not be confused with Uber A, plus the countless other people who have technically been cleared but could still definitely be working for A. I get that Ali isn't Rosewood's sweetest or most beloved resident, but does she really deserve to have an entire fleet of people after her and her friends?

2. Has The Rosewood PD Just Given Up?

They arrested and eventually cleared Andrew and then... decided their work was done? To be fair, that was pretty much the most effort they've exerted during this entire series, but still! Maybe if the cops would actually do their jobs, the Liars wouldn't resort to ridiculous tactics like sneaking into abandoned mental institutions in search of answers.

3. Did Emily Forget That Sara's Friends Basically Described Her As A Sociopath?

Em, I say this with love — I know you always look for the best in people, but you should maybe be a little more skeptical. Emily met up with Sara's friends back in Season 4 and one of them described her as a terrible person, even going as far as to say she wished Sara was dead. Perhaps this was a bit harsh, but wouldn't it make Emily at least a little wary of her new love interest? For more on Sara Harvey's constant suspiciousness, check out Bustle's PLL podcast.

4. Why Did A Let The Liars Have Perfect Hair In The Dollhouse, But Not Sara?

Aria, Emily, Hanna, and Spencer left the dollhouse looking like a million bucks despite being tortured for almost a month. Why didn't Charles let Sara have her hair and make-up done, too? It just doesn't seem fair.

5. How Many Black Hoodies & Gloves Does A Own?

Do they come from the same store that has an endless supply of ruffled yellow tank tops? Did A buy up these garments in bulk, or are they purchased on an as-needed basis?

6. Where Has Tippi The Bird Been?

Random side characters like Spencer's sober coach (nicknamed "Drug Free Dean" by Hanna) have shown up, so why not Tippi? I'd really grown to like her. She was bird-napped from Spencer's bedroom by A, but she wasn't in Charles' lair at the dollhouse. I guess she could be in one of A's other lairs.

7. Speaking Of Which, How Many Lairs Does A Have?

It has to get expensive and time-consuming to build lairs all over Rosewood and beyond.

8. What Exactly Is The Rosewood PD's Criteria For Declaring Someone Dead?

OK, once I can understand, but with all these people seemingly rising from the dead, perhaps the Rosewood PD should revisit their process for declaring someone deceased. The Liars have gotten a lot of mileage out of their LBDs, mainly because they've repeatedly attended funerals for girls who've turned out to be very much alive. At least this question has helped Pretty Little Liars provide us with even more amazing fashion for the past six seasons.