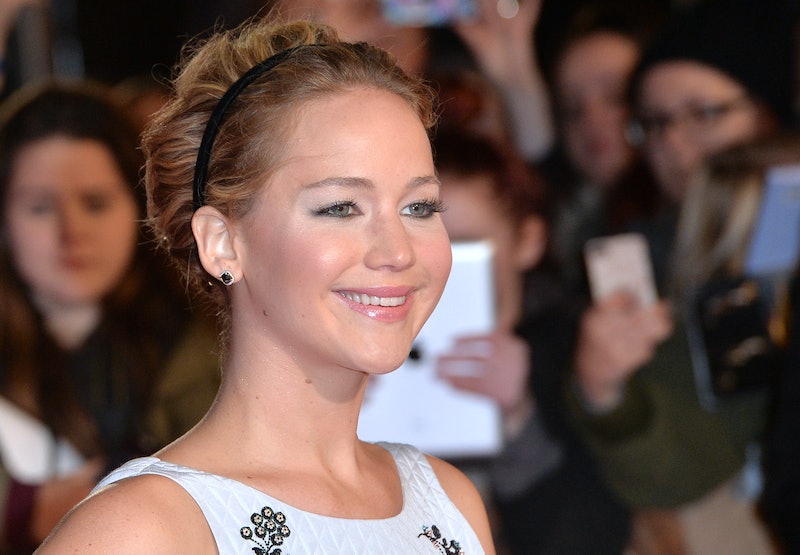 For someone who people supposedly love, there sure are a lot of ridiculous rumors out there about Jennifer Lawrence. She stays under the radar most of the time, only coming out when she has a project to promote, so that gives everyone plenty of time to get their little wheels spinning about what she might be up to and who she might be up to it with. And since the actress doesn't often respond to the claims about her in tabloids, they tend to escalate and escalate, until all of a sudden.... Did you hear?? She's pregnant with a baby, and no one knows whether it's Bradley Cooper's or Josh Hutcherson's because it was the result of a threesome!

I'm sure none of us fans are proud of how gossip-y we are when it comes to spreading stories about J. Law, but since she's such a warm, approachable celebrity, I think it's easy to forget that she isn't actually our friend, and that we don't actually know her. So, unlike a normal person would react when they hear some gossip that you spread about them, Jennifer Lawrence can't show up at each of our houses and bang down our doors and demand that we get our stories straight. First of all, because that's not her job, and second of all, because there are just so many tall tales out there in the wind. Here are just a few of the most ridiculous rumors out there about J. Law.

1. That She Got In A Fight With David O. Russell

After a rumor went around the Internet that Lawrence and Russell got into a screaming match on the set of their latest film, Lawrence actually took to Facebook to shoot it down. (Which she never ever does, so you know this was serious.)

The two of them are so charming together in interviews, and such good friends, that a group of fans has started shipping "Joshifer," as the two of them are called. And no matter how improbably it seems or how many times either side denies it, they are convinced and not to be deterred.

Honestly, I can barely even blame people for this one because just imagine how beautiful their babies would be . But regardless, it's pretty clear that they have more of a brother-sister relationship than anything, so everybody cool it.

It doesn't help that these two have been costars in approximately 23490239587 movies together, but you'd think that Bradley Cooper saying that he was old enough to be Lawrence's father would have convinced people that they aren't together. (Although he undermined that sentiment by dating Suki Waterhouse, who's a year younger than Lawrence, so get your message straight, Bradley Cooper.)

5. That She's Dating Anyone She's Ever Costarred With In A Movie

Hold onto your butt, Chris Pratt!

6. That She Fell On Purpose At The Oscars

Right, because the word you really want to embody the moment you go up onstage to collect your Academy Award is "clumsy".

Lawrence actually responded to this rumor, too. She told E! News, "Am I pregnant, too? God, no — I'm not pregnant! ... I don't pay any attention. I can't. It's so fictional. There's no point in paying attention to it."

8. That She's Not A Good Actress

There's a contingent of people who think Jennifer Lawrence is overrated as an actress, and they make themselves heard on Twitter, message boards, and comment sections all the time. Sorry, did you not hear me earlier when I talked about Lawrence winning an Oscar? Check the hardware.

9. That She Moved In With Chris Martin

Although I don't know how they'd have time to cohabitate, in between their constant breakups and Lawrence's fights with Martin's ex-wife Gwyneth Paltrow. (Yep, those are also rumors.)

10. That She And Nicholas Hoult Are Back Together

Doesn't matter how long they're apart or why, every time they start shooting another X-Men movie together (see: #5), the press has a field day and starts speculating that they're an item again because they're hanging out together all the time. On set. Facepalm.

11. That Serena Was A Good Movie

Listen, I'm as big a fan of Jennifer Lawrence as the rest of you, but don't try to tell me that that wasn't a pile of hot garbage.