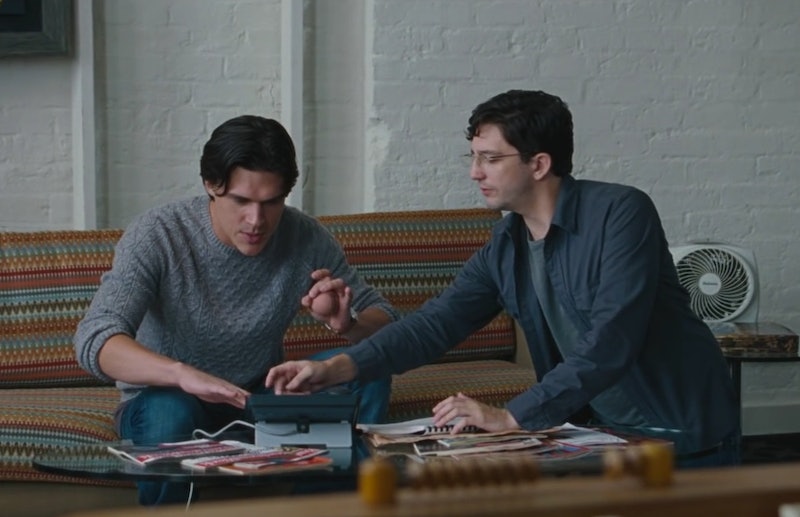 The protagonists in The Big Short made a lot of money by famously betting against the big banks before the financial crisis of 2008. It's a classic American rags-to-riches story — kind of — for The Big Short's Charlie Geller and Jamie Shipley, played by John Magaro (The Umbrella Academy) and Finn Wittrock (Ratched), respectively. In the film, Charlie and Jamie team up with Ben Rickert (Brad Pitt) to form Cornwall Capital, a small investment fund started in their backyard. In real life, Charles Ledley and Jamie Mai started Cornwall Capital in a shed in Berkeley, California, and went on to make millions by making small bets against the housing market. Ledley and Mai were relative newbies to the game of Wall Street (as evidenced by the fact that they lived in California) but were able to transform a $15 million investment into $120 million by counting on the failure of subprime mortgages. Now that they are immortalized as main characters in a huge Hollywood film, it's only right to wonder, where are the real Charlie and Jamie now?

After the crash of 2008, Ledley left Cornwall Capital but not the world of finance. Instead, Leadley left Cornwall Capital in 2009 and joined Highfields Capital Management in 2010, where he appears to still be working. Highfields Capital Management is based in Boston and is described on its website as "a value-oriented investment management firm which manages private investment funds for endowments, charitable and philanthropic foundations, pension funds and other institutional and private investors."

Mai, meanwhile, stayed with Cornwall Capital, where he serves as the CEO and the Chief Investment Officer, according to Bloomberg. He is also listed as Chairman of the Board at Keweenaw Land Association, Ltd, "a forest products and land management company." Both Ledley and Mai are listed as members of the Board of Directors for The Tobin Project, a kind of think tank that focuses on academic research.

Ledley and Mai have stayed largely out of the limelight since the release of The Big Short, however, Magaro revealed in an interview with CinemaNerdz that Ledley agreed to consult with Magaro throughout filming and even visited the set. "Charlie and I Skyped a few times; I would ask questions and he would answer. He came down to New Orleans when we were shooting to visit and we had dinner and he came to set. He was always open if there was anything I needed," Magaro said, adding that Ledley approved of the finished film.

As for Mai, it's unclear how involved he was in the making of the film. However, Wittrock hinted that the two had spoken about the events covered in The Big Short. Most notably, Wittrock told The New York Times, Mai gave the impression that he was deeply disheartened by the crash, and remains disappointed that no one in the big banks was ever held accountable:

"My guy, his [real] name is Jamie Mai, said that he still has this sense of frustration that no one paid attention. They were screaming about this as loud as they could, but everyone turned a deaf ear. A lot of our guys didn't want to use their real names for this movie — we had to change their last names. I think they felt they were burned in the process of trying to get their voices heard."

Mai and Ledley aren't the only ones who emerged from the events of The Big Short disenchanted with the financial world. Michael Burry, who Christian Bale plays in the film, opened up to New York Magazine in 2015 about how disappointed he was in Wall Street's lack of personal responsibility. “The zero interest-rate policy broke the social contract for generations of hardworking Americans who saved for retirement, only to find their savings are not nearly enough.” He continued, “Government policies and regulations in the postcrisis era have aided the hollowing-out of middle America far more than anything the private sector has done.”

Many of the real men behind The Big Short might have emerged from the crisis with millions to their names, but it seems to be a bittersweet victory.

More like this
What Does The Presley Family Think Of 'Elvis'?
By Arya Roshanian
'Elvis,' 'Walk The Line' & 10 Other Movies Where The Actors Actually Sing
By Radhika Menon
Taylor Swift's “Carolina” Theme For 'Where The Crawdads Sing' Soundtrack Is Here
By Jake Viswanath
Memes & Tweets About 'The Minions: The Rise Of Gru' #Gentleminions Trend
By Grace Wehniainen
Get Even More From Bustle — Sign Up For The Newsletter

This article was originally published on Jan. 6, 2016