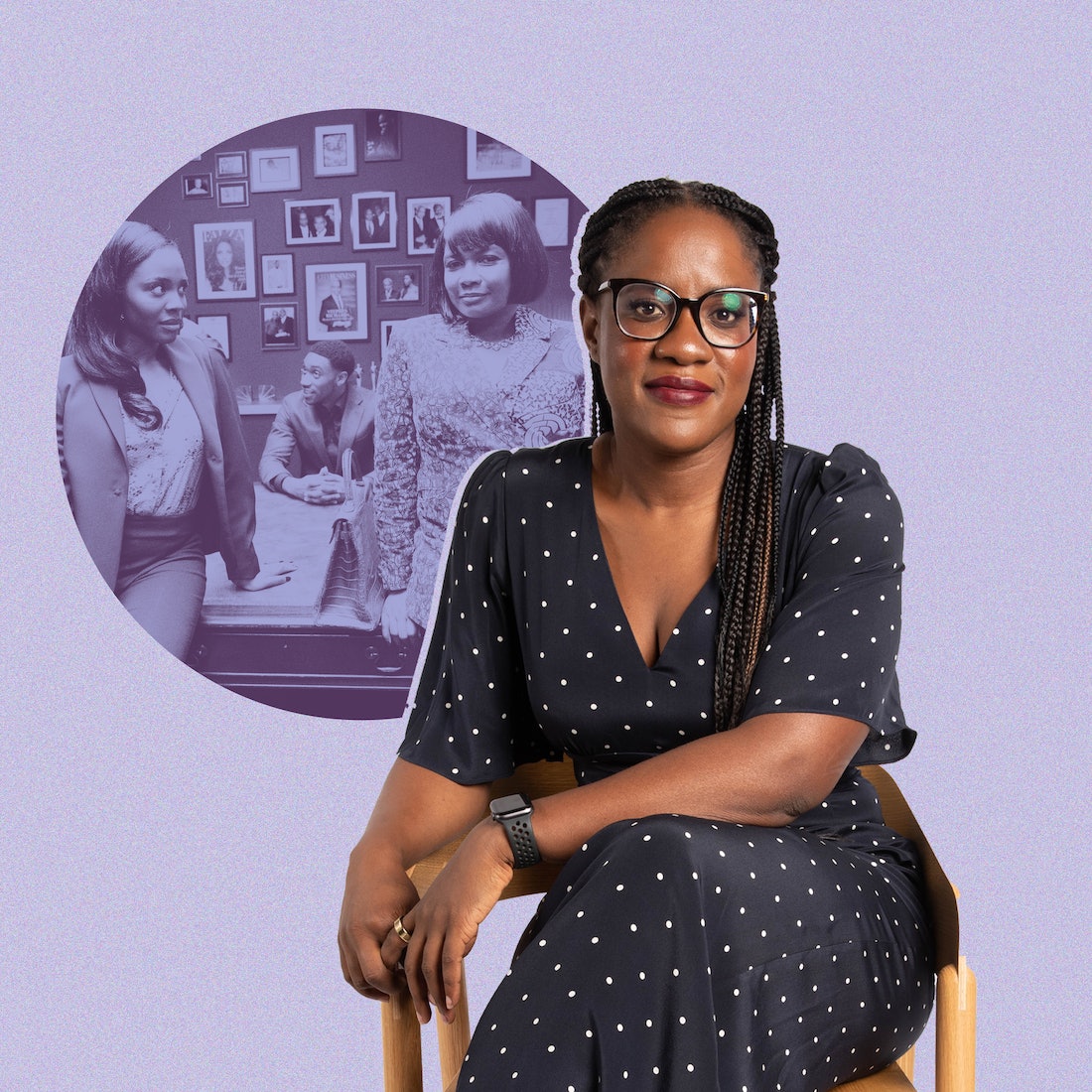 ITVX’s Riches is a show with the dial turned up. The buildings are high rise, the clothes are high fashion, the shoes are high heels, the conflict is high drama. With creator Abby Ajayi citing Dynasty and Dallas as influences on the show, it’s small wonder that Riches is so delightfully OTT. Ajayi is a Londoner who moved to L.A. in search of the sorts of opportunities that are lacking for Black screenwriters back home. Having since worked on Shondaland hits like How To Get Away With Murder and Inventing Anna, she has form in the bold, big-budget U.S. dramas that Riches references. But the showrunner from Edmonton is also no stranger to homegrown fare — she cut her teeth on EastEnders, Holby City and Hollyoaks, as well as CBBC classic and social media-beloved Tracy Beaker. Riches feels like a culmination of these two strands of Ajayi’s career, melding the high-production values and the self-assuredness of prestige U.S. TV, with the unique humour and keeping-it-realness of British telly.

Riches follows the Richards, a family at war, vying for control of a business — Flair & Glory. Ajayi explains that she has “always” wanted to do a family business show. As well as watching them, she’s also fascinated by the drama that surrounds real-life family brands and businesses “whether it's the Beckhams, the Kardashians, the Guccis, the Hiltons, the Murdochs,” she tells me. “It's not always about wealth, but it's about how once you've got money in the mix with blood, the stakes are so high.”

In Riches, the stakes are even higher because this is a family business bound up with Black identity. Flair & Glory is a cosmetics and hair care company, a choice that Ajayi made intentionally. She says: “The hair business is incredibly lucrative, but often Black people are cut out of the actual profit participation. Also hair is incredibly politicised and there's so much judgement about how Black men and Black women have their hair.”

Ajayi explains that, as a cosmetics and hair care company, Flair & Glory gave her the chance to show Black hair on screen “in all its textures, lengths, colours.” The year before she joined How To Get Away With Murder as a writer, Ajayi watched the now-iconic moment when Viola Davis as Annalise removes her wig. Through Riches, Ajayi says she’s aiming to bring similarly real moments to British TV: “I wanted that. Yes, a Black woman has changed her wig. We can just keep moving. It’s life, it happens, wigs and all. Big secret.”

In its portrayal of a wildly successful Black hair care company, Riches also touches on debates around Black capitalism that are very current. In the wake of the Black Lives Matter protests in summer 2020, there were calls to buy from Black-owned businesses, listicles from news outlets directing readers to buy Black, and initiatives like Black Pound Day launched. But such efforts have prompted criticism from those who wonder whether Black liberation can ever rest within a system that is inherently exploitative. Ajayi describes these issues as “interesting, thorny, and complex.” She sums up the debate: “As we talk about endgame capitalism, you're like, do you beat them? Do you join them? Do you stand on the outside and say it's crap, but still worry about your own future?”

The show explores ethical issues in several episodes, Ajayi tells me, which question: “whether the brand[‘s] success in a capitalist sense [is] at the expense of the Black consumer.” And also once success is attained, “Do you sell to a big multinational conglomerate that pays tax nowhere, that has none of the historical emotional connection to the Black community?” There’s a lot to unpack, including whether these issues are, as Ajayi puts it, purposefully “weaponised against emerging groups, against emerging countries. So they're finally getting their seat at the table, and then the rules have moved.”

Those who are after escapism — don’t be afraid, you’ll still find it here. The show is by no means didactic, it’s a drama first and foremost. “Those conversations are subtextual to the character stories, the emotional stories. But I think it's really important to frame them and explore them through the lens of what that means to Black people,” Ajayi says.

While the Richards have the kind of generational wealth that many Black Brits lack, Ajayi notes that: “money can buy you all kinds of things, but happiness isn't necessarily on the table and it doesn't mean you outrun racism.” In episode one alone, there are gestures towards the inequality embedded in the systems of healthcare, law, and policing that no Black British person can buy their way out of. Ajayi explains that she wanted to bring the depth of the Black British experience to life, which meant balancing injustice with joy. It also meant looking at what it means to process moments that are at once devastating and quotidian. She explains: “It doesn't end you. We navigate that stuff. Sometimes you tackle it directly and at other times you let it go, because [otherwise] you'd be fighting all the time.”

“Not only are we going to show the London we know in a way we've always experienced it — which is inclusive and diverse and vibrant and contradictory and joyful — in front of the camera, but also mirror that behind the scenes as well.”

As well as giving Ajayi the opportunity to air parts of the Black British experience which are rarely highlighted on British TV, Riches’ mostly Black ensemble cast helped lessen the weight of expectation. As Ajayi describes it, absent was the one Black character who had to be all Black things to all Black people. Instead, characters “can be morally ambiguous, sexually provocative, you can have so many different things,” she says. For her the casr represents the fact that, “There isn't a monolithic Black person or Black perspective. And even this idea of a Black community — there is community but we feel differently, we vote differently. We have different expectations of life.”

The Richards are several generations of a British-American-Nigerian family, and references to Nigerian culture are lovingly interwoven throughout the show. They are there at the level of script — there’s a nod to the jollof rice wars, and at the level of costume — aunties wear geles at family events. But significantly, characters sometimes switch into Yoruba — by no means a common occurrence on British TV. Ajayi calls the experience of including the language in the show as “fortuitous,” noting that she and her casting team didn’t deliberately seek out actors who spoke it. Ajayi describes her grasp of Yoruba as “ropey” — she can understand it well but isn’t as comfortable speaking it. But, thanks to the fluency of actors Emmanuel Imani (who plays Simon) and Ola Orebiyi (who plays Gus), as well the sense of ease on set, they were able to collaborate to bring authentic Yoruba to screens. Ajayi says, “I think a lot of the actors would say they hadn't had [that comfort and safety] very often in their career. They could say, ‘you kind of know that your mum would shout at you in that language’ — it was our experience.”

The use of Yoruba is also something that feels authentic to London, where the show is set and where, in reality, most of the UK’s Black British population resides. Ajayi tells me she wrote Riches while feeling homesick across the pond. “[It] was my opportunity, in tandem with my production partners, to say not only are we going to show the London we know in a way we've always experienced it — which is inclusive and diverse and vibrant and contradictory and joyful — in front of the camera, but also mirror that behind the scenes as well.”

Riches also speaks to the global connections of Black-British people. The Richards are a family whose heritage spans three continents — siblings Nina and Simon were born in the UK but grew up in the U.S. and feel very American. Ajayi was keen to reflect the fact that Black British families contain multitudes. She says: “Our hearts are in myriad places. There's so much talk about identity, but it's not a fixed thing. It's not a mutable thing. You are elements of lots of different places.”